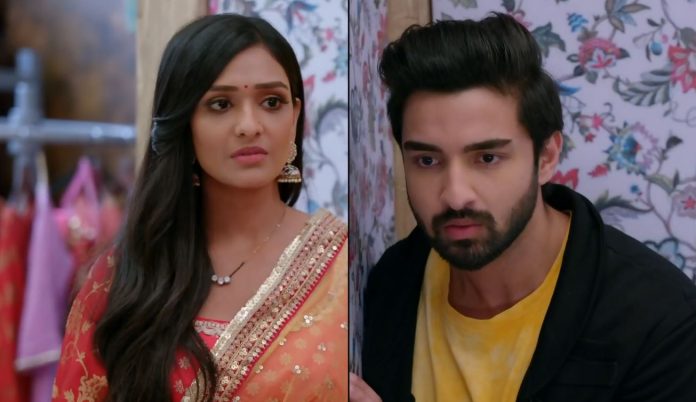 Bhagya Lakshmi 15th December 2021 Written Update Pitfall Rishi learns that Malishka and Lakshmi are in the same mall, buying the same bridal dress for Malishka. He doesn’t want them to see each other. He tells that everything will be over if they come face to face. He tries keeping Lakshmi away from Malishka. He selects a dress for Lakshmi and asks her to try it. He insists her just to send her away, then later he realizes that Malishka has also gone to the changing room. He rushes to stop Lakshmi and enters her changing room, while leaving Malishka upset. Malishka realizes his presence with Lakshmi. She goes to confront him, but soon gets caught by Lakshmi, Viraj and Dadu.

Rishi hides from Viraj and Dadu. Lakshmi compliments Malishka for her stunning look in the bridal dress. She tells that even she chose the same dress for her, and the dress reached the right person, the bride. She asks Malishka how did she get the same dress to try. She asks how does Madhu know that Malishka is going to get married. The mall lady Madhu tells that Malishka’s husband has selected this dress for Malishka. Malishka’s husband confuses Lakshmi and Viraj. Viraj tells that he didn’t ask Madhu to give the dress to Malishka. Madhu tells that Malishka came with someone else. Will Rishi and Malishka get caught? Keep reading.

Earlier in the show, Rishi and Malishka make an excuse in front of Kiran. Malishka asks him to take her on shopping. She tells that they are the best couple. She wants to tell the truth to Kiran at least. He tells that Kiran might tell the truth to Neelam and then their marriage might stop. Lakshmi tells that she will get confused seeing the wide collection in the mall. She looks for a good bridal dress. Rishi takes Malishka for shopping. She asks him to buy the best one for his bride. Rishi feels guilty of cheating Lakshmi.

Dadu and Viraj go to final the sherwani for the groom, until Lakshmi decides the bridal lahenga for Malishka. Dadu tells that they have less time to decide the clothes. Viraj asks Lakshmi to select some dresses, they will come back and finalize it. Lakshmi checks some bridal lahengas. Rishi and Malishka also come to the same mall to see the bridal collection. Rishi and Lakshmi have a hit and miss closely. Ayush and Shalu have an argument because of Neha. Ayush tells that he isn’t flirting with Neha, he just dropped her home. Shalu scolds him for his flirty side.

She warns him about Neha’s motives. She calls him foolish. He tells that he will take revenge on her. She tells that he looks cute sometimes. Ayush screams when Shalu angrily hurts him. Lakshmi looks for the perfect lahenga for Malishka. Malishka chooses the outfits as per Rishi’s choice. Rishi asks the manager to attend the other customers. Lakshmi likes a subtle design lahenga for Malishka. She tries to call Dadu to show the selected outfit. She goes to the network zone to make a call.

Neha takes care of Ayush. Ayush gets into an unwanted fight with Shalu. Rishi also likes the same lahenga which Lakshmi had selected. He tells that he wants to buy it right away. He tells that he will talk to the lady and convince her to let him buy this dress. He doesn’t think its a problem if he talks to the lady and gets the best lahenga for Malishka. Madhu tells that the lady who selected the lahenga is already married, she was buying it for someone else. Rishi looks for Lakshmi. Lakshmi informs Dadu that she has found the perfect lahenga for the bride. She asks him to come and finalize it.

Lakshmi gets to see Malishka, and gets confused. She misses Rishi and calls him. Malishka tries the outfit and shows it to Rishi. He requests her to try the lahenga he had chosen. She asks him to just come to the changing room side. She goes with the lahenga. He answers Lakshmi’s call. He sees a dress and finds it perfect for Lakshmi. He asks her if he can guy a dress for her. Lakshmi asks Rishi if he had the food. He tells that he will have it later. She asks him to have food on time. He tells that Ayush can’t reach him, he isn’t in the office. He talks to her and then gets shocked seeing her around. He thinks he has gone crazy. He surprises Lakshmi. She gets really happy to see him.

He tells that he can see her in front. She tells that even she can see him. She asks him what is he doing in the mall. Madhu tells her that Rishi wants to buy the lahenga she selected. She finds Rishi with the selected dress for her. She gets touched. She tells that she will try the dress and show him. She goes to the changing room. He worriedly goes to stop her from seeing Malishka. Viraj and Dadu look for Lakshmi. Malishka looks for Rishi. He doesn’t want to fight with Malishka. He enters the changing room to meet Malishka, and finds Lakshmi inside. Lakshmi feels shy seeing him. Rishi apologizes to her. He tells that he will just go out. He sees Malishka and hides inside with Lakshmi. Rishi and Lakshmi land in a moment.

Reviewed Rating for Bhagya Lakshmi 15th December 2021 Written Update Pitfall: 3/5 This rating is solely based on the opinion of the writer. You may post your own take on the show in the comment section below.