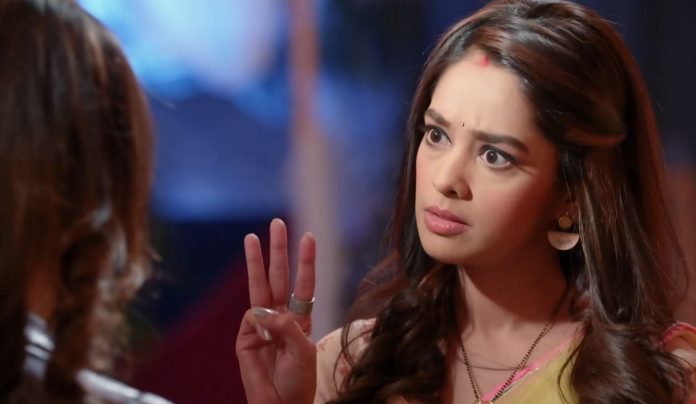 Kumkum Bhagya 15th December 2021 Written Update New challenge After the argument over the past and Ranbir’s photo frame, Ranbir tends to care for Prachi when she hammers on her hand and gets hurt. He still can’t see her hurt. He asks Prachi to just forward her hand. He applies the ointment to her hand. Prachi tries to judge whether his concern is true or not. Pallavi finds Ranbir in Prachi’s room. She is shocked to see their moment. She can’t believe that Ranbir is getting closer to Prachi once again by forgetting the latter’s big deceive. Rhea hinders Prachi and Ranbir’s moment. Prachi gives an ultimate challenge to Rhea.

She tells that Rhea just has three days of stay in the house, she will be thrown out of the house after three days, as a punishment for her evil deeds. She challenges Rhea, while Ranbir challenges her/Prachi that he really wants to see how she crosses limits to reach her goals. He tells that he will also set new limits in front of her, he shall see if she can cross the limits. Prachi likes his confidence and tells that their competition will be really fun. Ranbir is also sure of it. Ranbir and Prachi get against each other. Ranbir wants to stop Rhea from living, and defeat Prachi. Who will win this challenge? Keep reading.

She continues to hammer the wall. Ranbir goes to see her. He enters the room from the window. He asks her what is she doing. Prachi asks what is he doing in her room. Ranbir asks her not to disturb his sleep. He tells that her timing is so dramatic, she is doing a big drama. She tells that she has a problem with his picture, she feels like he is laughing at her. He laughs on his life’s tragedy. He reminds that she got this photo frame to see his face in his absence. She tells that he removed her from his life and heart, that’s the tragedy of her life. He asks her not to remove anything from his room, because she will be leaving in few days. He wants his room to stay the same. Prachi doesn’t want to leave him for Rhea to win.

Ranbir tells Prachi that he didn’t mean to ask her to go away, she can stay here if she wants, its her own wish. She tells that he can’t say this. He tells that he can never tell her to go away. She recalls his words when he ended their relation. He tells that he never asked her to leave the house. She hits her hand when she hammers to remove the nail. Ranbir stops her from hurting herself. He asks her when will she learn to take care of herself. She gets reminded of their old moment.

He tells that her eyes had a happiness in it before, but now her eyes are hurtful, it shows her fear of defeat, she looks defeated. Prachi tells that one always loses to heart, one always get cheated by the loved ones. She feels stabbed by him. She tells that she had got cheat for her love, she has to match up with those who betrayed her, else she will get behind because of her loyalty. He tells that she can stop herself from loving him, but her heartbeat shows that she still loves him, when she says that she hates him.

Prachi ruins the room decorations in anger. Ranbir isn’t able to sleep because of the sound. Prachi apologizes to the baby for scaring him by the sounds. She tells that she has troubled a baby a lot today. She calls Ranbir in the weak moment. Ranbir senses her call and goes to her room to see her once. They both stay separated by the door. Rhea is also sleepless. Ranbir doesn’t understand what is he doing, if he is upset with Prachi or worry for her. He is angered on her bad attitude. He decides to control his heart. Prachi also decides to not fall for Ranbir again. She wants just revenge on Ranbir.

He thinks he shouldn’t forgive her ever. Rhea sees Ranbir sitting outside the door. She asks him what is he doing. Prachi overhears their conversation. Ranbir lies that he was in sleep. Prachi asks them to just leave. Ranbir goes away. Rhea stops Prachi for an argument. She asks Prachi to leave from their lives. Prachi asks Rhea to do anything, try her best as much as she wants.

Rhea finds her really strong, a completely changed person. She decides to change her game plan. She wakes up in the morning. She wants the family to support her, and show their hatred towards Prachi. Ranbir wakes up Prachi. He tells that its his room, he needs his things. She tells that she has taken back her room which was snatched from her. Stay tuned.

Reviewed Rating for Kumkum Bhagya 15th December 2021 Written Update New challenge: 3/5 This rating is solely based on the opinion of the writer. You may post your own take on the show in the comment section below.