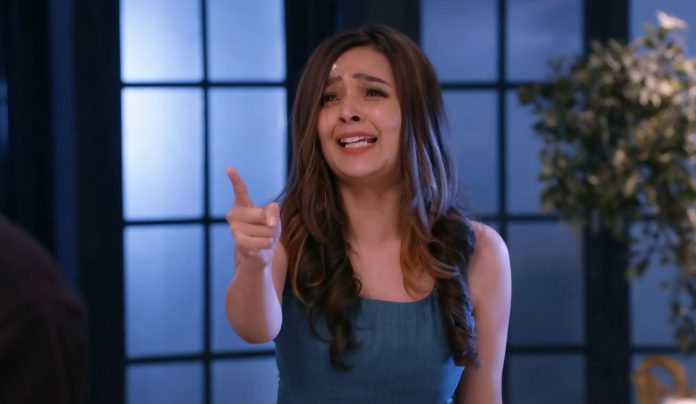 Kundali Bhagya 14th December 2021 Written Update Track closure Preeta is ousted from the house. She sits weeping outside the door and makes herself audible to the family. She pleads to the Luthras to believe her. She is affected that even Karan, Rakhi and Mahesh don’t trust her now. She never imagined that Rakhi will take the initiative to throw her out of the house. Preeta requests Karan to listen to her once, she isn’t responsible for Pihu’s death, Sonakshi is the culprit, who made so many people testify against her. Karan hears Preeta and cries. Preeta asks Karan not to separate her from himself. Karan cries for Pihu. He turns stone-hearted for Preeta.

Later, Sonakshi tries to win Karan when she finds him sunken in sorrow. She thinks its the best time to woo him and make him of her. Karan loses his cool on Sonakshi on realizing her motives of winning him over in his weak moment of pain. He drags Sonakshi outside to make her leave the house. Sonakshi tells him that its not her mistake, only Preeta was at fault and now she has left from their lives. Karan asks her to stop her nonsense and leave. Sonakshi asks him if he is rejecting her for that Preeta, who snatched the happiness of the entire family, Preeta has snatched Pihu, Preeta has got Pihu kidnapped and killed.

She angers him further by telling Preeta’s crimes. The family tries to stop Karan from throwing Sonakshi out of the house. Karan ousts Sonakshi from his house. He yells at her in anger. He refuses to accept her so called love. Sonakshi curses him that since he pushed her away, he will get such a bad jerk from his life one day and then he will think of his big mistake of ousting her. Karan cares a damn about her curse and asks her to never show her face again. Sherlyn didn’t think Sonakshi will fail so badly on approaching Karan.

Sherlyn plays safe and don’t intervene, seeing Karan’s rage. Kareena and Rakhi get upset with Karan’s move, and get worried for him, after Sonakshi’s curse. Sonakshi’s chapter gets a closure finally. It marks the entry of Prithvi again. Prithvi and Sherlyn team up to form the evil duo and destroy the Luthras, when Mahesh and Karan are sunk in depression and Rishabh being away in London. Keep reading.

Preeta begs Karan to open the door and let her inside. She asks him to please listen to her and not make her away from him, she already lost Pihu and can’t lose him. She tells that they will share the sorrow, if they stay together. Kareena asks her to shut up and leave. She tells that Preeta isn’t able to tolerate to get out of the rich family. She asks Preeta to leave. Bani calls Preeta unlucky to kill her own adopted child, just for the sake of money. She tells that Preeta didn’t value relations.

Karan rages hearing their comments. Sherlyn asks Preeta to leave from their house, go too far and never come back. Preeta cries and steps away. At the same instant, Mahesh gets an attack. He asks the family to call Preeta, she is his daughter. Mahesh faints down. The family worries for Mahesh. Bani tells that Preeta isn’t anyone to them now. Sherlyn likes the day’s victorious happening. She finally got rid of Preeta. She thinks to inform Prithvi that his revenge is fulfilled, Preeta is thrown out of the house by Karan’s hands.

Karan misses Pihu a lot. Preeta sits on the road and weeps helplessly. Karan doesn’t want Preeta to come back. Preeta comes to meet Sarla and Janki at home. She hugs Sarla and shares her sorrow. Shrishti comes home at the same time and tells the shocking news of Pihu’s death in the accident. She tells Sarla that Luthras did the same mistake again and threw out Preeta from their house. Sarla asks Preeta if this is true, if they lost Pihu forever. Karan stands under the shower and cries.

Sarla takes Preeta for cleaning the blood faces from her face and neck. She cries for Pihu. Arora family has the same grief for Pihu’s loss. Karan and Preeta miss each other and think of their moments. They cry for their separation. Sarla wipes Preeta’s tears. Rakhi finds Karan crying in the bathroom. She goes to console him. Sarla and Shrishti don’t leave Preeta alone and handle her in sorrow. The Luthras cry for Karan who is in depression since a week that Preeta left.

Kareena asks Sonakshi to help Karan come out of the depression. Sherlyn and Kareena ask Sonakshi to spend time with Karan. Sonakshi thinks the right time has come, for which she was waiting since long. Karan finds Sonakshi in his room. She tells that she is feeling scared, just he can save her. He asks her what does she mean. She hugs him and tells that fate has snatched Pihu from her, just he is with her, but he has no concern for her. Karan makes her away and asks her the reason for coming close to her.

Sonakshi promises him that she will keep him very happy, she will not let sorrow reach him. He asks her what does she mean. She proposes him for marriage. He asks her to stop nonsense. He tells that she is just a friend, now knowing her feelings, he will not tolerate her in his house. He asks her to go to her dad’s house. She continues to hug him and get close. Karan shoves her away. Sonakshi bursts her anger at him. She tells that she has given her daughter to him, but he lost Pihu, and now he is just thinking of Preeta. She calls him dual-faced to still live in Preeta’s memories, by saying that he hates Preeta.

She rebukes him for ill-treating her. She tells that she loves him, but he can’t insult her. She humiliates him in anger, and then faces his wrath. He asks her to get lost. He tells that he will also not tolerate her nonsense. He drags her downstairs. She tells that Preeta killed Pihu, and he is still mad for Preeta. He asks her to get out. Sonakshi curses him before leaving. She blames him for snatching her happiness. Karan shuts the door on her face. He doesn’t want to talk to anyone. Sonakshi leaves. Karan takes Preeta’s clothes and photos. He burns it. He doesn’t want Preeta in his life. The family cries for Karan.

Karan loses himself. He drives away from the house and drinks alcohol. He goes to Sarla’s house to meet Preeta. Aroras find him drunk. Preeta cares for Karan, who angrily accuses her for snatching Pihu. He tells Sarla that Preeta snatched his happiness, she ruined his family, she is the one who has damaged their lives. He declares that Preeta doesn’t exist in his life from now, he just hates her. He tells her that she has killed Pihu. Preeta asks him to stop it. He defends herself that she tried hard to save Pihu, who got killed because of Sonakshi. He asks her why didn’t she get Pihu home, why didn’t she die when Pihu died.

Sarla slaps him to shut his stupid mouth. The neighbors gather to see their family clash. Sarla asks Karan how can he suspect Preeta, she can never kill Pihu. She pleads with him to trust Preeta. Karan calls Preeta and his relation over. He tells that she doesn’t matter in his life now. He asks Sarla to keep her daughter with her, he doesn’t want a greedy woman like Preeta, who had killed Pihu for money. Preeta asks Karan how can he accuse Sarla if anything wrong happens in their lives. She regrets to love a wrong person in her life. Karan tells that she is a wrong person, who cheated his family.

Preeta feels she got cheated by him, he never trusted her, his family never valued her. She also vents out her frustration on him. Karan asks Preeta why didn’t she trust him that he will save Pihu. She tells that Pihu died because of Sonakshi. Karan insults Aroras. Preeta asks him to get out of her life. She also pushes him out of the door, like he did. She adds that she is removing him from her life. He tells that he burnt all her memories, they both weren’t made for each other. She agrees to his words. They decide to never meet again. Karan leaves from her house. He tells that he isn’t her husband from now, she isn’t his wife. Sarla asks Preeta to be strong. Preeta cries for Karan.

Sarla asks her to protect her self-esteem, she shouldn’t forgive her husband or tolerate the wrong if he attacks her self-esteem. She asks Preeta to never tolerate wrong. She knows that Preeta has the most grief for Pihu’s loss. She asks Preeta to stop crying and forget Karan. She tells that Preeta will never cry and move on in her life. She makes Preeta promise that she will lead her life like a strong individual. Preeta wants to go far from the city. She tells Sarla that he will go away from everyone’s lives. The family cries for Preeta. After two years, Sarla and Janki await Preeta home. They make Preeta’s favorite dishes. Preeta is seen totally changed into a strong and independent woman.

Reviewed Rating for Kundali Bhagya 14th December 2021 Written Update Track closure: 3/5 This rating is solely based on the opinion of the writer. You may post your own take on the show in the comment section below.