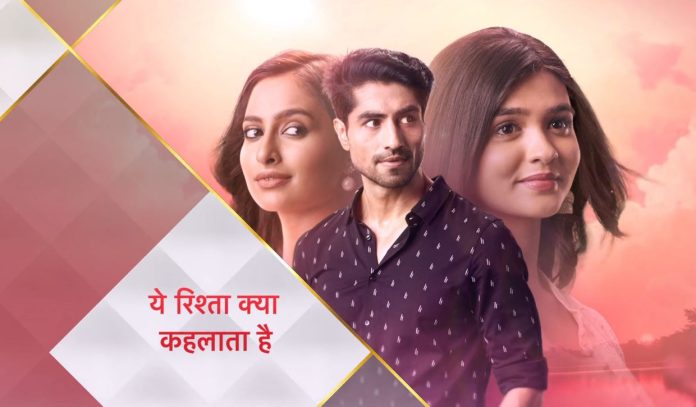 Akshara tells Aarohi that this is called “delusion of grandeur” in psychology. Aarohi gets shocked. Akshara reminds Aarohi that she is also a therapist and asks her to not treat her like an illiterate person. She also requests Aarohi to not increase troubles or become a reason of troubles for her, Abhimanyu and for both families. Aarohi starts accusing Akshara of trying to gain sympathy and break her and Abhimanyu’s relationship. She warns Akshara that she will not let her break Abhimanyu and her relationship. Aarohi also warns Akshara to not eye her fate. Akshara starts shouting Aarohi to shut. Aarohi asks her not to shout.

Aarohi tells Akshara that she will soon tell her how she can prove to her that Abhimanyu’s chapter ended in her life. Both Akshara and Aarohi say that they will wait for that time. Akshara says to Aarohi that she will pray to god that Abhimanyu will never peek in her heart as he will suffer a heartbreak seeing her heart’s truth. Kairav overhears Akshara and Aarohi’s conversation. Aarohi looks at Akshara with a shocking expression. On the other hand, Abhimanyu feels that Akshara doesn’t care for him. He sees Manjiri working on kitchen work. Abhimanyu asks her to rest. Manjiri reveals that she made carrot halwa as Harshvardhan wants to eat it.

Abhimanyu says to Manjiri that now he feels how she felt when Harshvardhan used to ill treat her. He further says to Manjiri that both of them are unlucky in love life. Abhimanyu, Neil and Parth help Manjiri in kitchen work. Manajri feels happy. Abhimanyu sees “Methi Dana” and recalls Akshara’s words. He beats the utensil in anger. Neil asks what she thinks about her son’s cooking. She praises carrot halwa made by Abhimanyu, Parth and Neil. She feels dizzy and Abhimanyu gets worried for her. At Goenka Mansion, Swarna says she sent juice for Akshara and Aarohi. Akhilesh says Aarohi did good work by saving Abhimanyu and fulfilled her responsibility as a doctor.

Swarna says she still feels that Aarohi still likes Abhimanyu. Kairav says there is no control on a person’s liking and disliking. Swarna says even after everything that happened Aariho went to Abhimanyu’s house and gave a rude reply to the family’s questions. Manish recalls Aarohi’s rude behavior. He stands up and says that problems arise whenever Birlas name is taken in their house. Manish leaves the dining table saying that he is tensed thinking what will happen in future. Akshara overhears her family’s conversation. She thinks she and Aarohi stand together whenever there is family’s matter.

At Birla Mansion, Abhimanyu asks Manjiri that she needs to go to the hospital for some tests. Harshvardhan says Manajri will get fine at home only as everything is getting managed at home only. Abhimanyu asks Harshvardhan’s what many things Manjiri needs to manage, home, family and her own illness too? Manjiri tries to stop Abhimanyu from arguing. Abhimanyu says if people who are taken for granted start living their life, then the people who take others for granted will know the former’s worth. He asks if he can’t treat his own mother being a doctor then what is the worth of his degree. Abhimanyu says it’s his responsibility to take care and treat Manjiri (his mother).

Harshvardhan tells Abhimanyu he can’t replace Birla hospital’s leading doctor with anyone else. Anand asks Abhimanyu to take Manjiri to the hospital and get her tests done. He further says they will do whatever necessary after Manajri’s report arrives. Abhimanyu thanks Anand. On the other hand, Akshara and Aarohi try to cheer up Manish by making thieves get up. They remove their masks and ask him to not take tension. Kairav and Vansh too join their sisters to cheer up Manish. Akhilesh and the rest of the family also sing and dance.

Swarna and Suhasini try to bring Aarohi and Akshara closer but fail. Manish notices this. On the other hand, Abhimanyu is seen in hospital with Manjiri. Aarohi enters the ward. Abhimanyu asks her to not go personal. Aarohi says she brought Manjiri’s reports and knows the pain of a child, who sees his/her mother in pain. She asks Abhimanyu if she can read the reports being a doctor. Aarohi’s phone rings, which makes Abhimanyu angry. She puts the phone on silent. Aarohi reads the report and tells Abhimanyu that Manjiri’s cholesterol level has increased, which can affect her cardiac conditions. Abhimanyu says he knows it. Aarohi says it’s her duty to inform her senior doctor about her patient’s condition. She further says that according to the reports, Manjiri needs to be kept happy and without stress.

Abhimanyu praises Aarohi’s work and requests her to leave him alone with his mother. Aarohi feels happy that she is not a normal person for Abhimanyu. Aarohi hears Abhimanyu from outside the ward. Abhimanyu cries and asks Manjiri what she wants him to do to make her happy. Akshara gets tensed to hear Abhimanyu’s words through Aarohi’s phone. She plucks some flowers from a plant and uses it to make something to save Abhimanyu’s mother. Akshara makes a hibiscus oil and thinks to send it for Manjiri. Neil brings the hibiscus oil made by Akshara for Manjiri and it starts working on Manjiri. Abhimanyu recalls Akshara by the oil name. He asks Neil, who gave her this oil. Neil lies saying that an old homely doctor gave this.

Reviewed Rating for Yeh Rishta 14th December 2021 Written Update Twisted love: 3/5 This rating is solely based on the opinion of the writer. You may post your own take on the show in the comment section below.