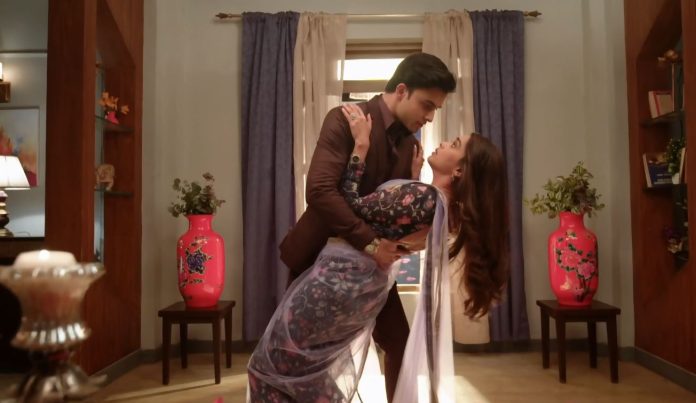 Kumkum Bhagya 16th December 2021 Written Update Romance Prachi collides with Ranbir and lands in his arms. He holds her tightly to save her from falling. Prachi too doesn’t want to fall down, because of her pregnancy and takes his help. They both have a romantic moment. Prachi finds Rhea cooking the food and impressing the family. Its Rhea’s first rasoi. She makes the sweets to fulfill the rituals. She goes to call Ranbir. She finds him with Prachi.

Prachi angers Rhea by revealing how close Ranbir and she were. She tells that there is a world outside the kitchen as well, Rhea could see it, if she comes out of her zone. Rhea asks Ranbir what is Prachi saying. Prachi tells her that Ranbir doesn’t want to tell her anything, else it will be like adding the salt in her sweetdish. She further adds that Ranbir just held her tightly in his arms. Rhea is shocked to know this. Prachi ruins Rhea’s happy mood. Keep reading.

Earlier in the show, Prachi warns Rhea that she will show her right place again. She asks Rhea to pack her bags and leave in the morning. Rhea tells that Prachi is day dreaming. Prachi insults her. She tells Rhea that she will throw out Rhea in just 3 days from now. She adds that Rhea can’t do anything against her. Rhea finds her really strong, a completely changed person. She decides to change her game plan. She wakes up in the morning. She wants the family to support her, and show their hatred towards Prachi. Ranbir wakes up Prachi. He tells that its his room, he needs his things. She tells that she has taken back her room which was snatched from her. Stay tuned.

Helper tells her that Bahu should make the sweets to bring sweetness in the relations. Rhea tells hat she doesn’t believe in such traditions. She recalls Prachi’s words and decides to make the sweets. Dida meets Prachi and hugs her happily. She likes to see a strong Prachi. Prachi apologizes that she couldn’t meet her. She is thankful that Dida supported her. Dida tells that she wanted to throw out Rhea from the house, but she failed. She tells that Pallavi isn’t letting her do her wishful. Prachi asks Dida just to bless her. She tells that Ranbir was going to marry Rhea, and married as well. She is upset.

Dida tells that Prachi didn’t teach her anything, she is doing her wishful. Pallavi is surprised. Ranbir feels something happens to him when Prachi is in front of him. He doesn’t feel angry on Prachi, but himself that he is still thinking of her when he knows that Prachi has come in his life to take revenge. He wishes that she stays back for another reason, that’s their togetherness.

Ranbir and Prachi collide and land into a romantic moment. They recalls their romantic times and also their bitter separation. Prachi doesn’t want to recollect their good moments. She just wants to remember his betrayal. She remembers his challenge. Rhea asks Ranbir to come and have the sweetdish. She tells about the new bahu’s ritual of making sweets, it brings sweetness in relations. Ranbir tells that there is another ritual in the house, they all dine together. Prachi thanks him for the invite. Rhea gets upset.

Reviewed Rating for Kumkum Bhagya 16th December 2021 Written Update Romance: 3/5 This rating is solely based on the opinion of the writer. You may post your own take on the show in the comment section below.