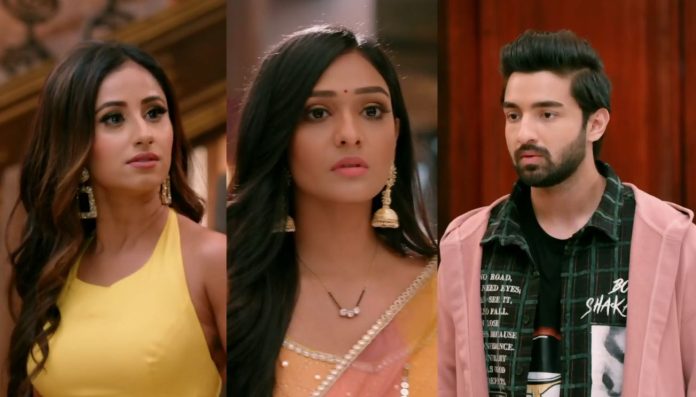 Bhagya Lakshmi 18th December 2021 Written Update Unhappy Rishi Malishka tells that she will make Rishi of her forever, he will never be of Lakshmi or anyone else. Rishi wakes up from sleep. He thinks to stay away from Lakshmi from now. He doesn’t want to feel anything for Lakshmi. He tells himself that he just loves Malishka. Lakshmi warns him to never say anything against him. Rishi thinks if he keeps talking to Lakshmi, then he will fall in love with her. Lakshmi asks him to think of the consequences, if he really lies to her or does anything wrong, then she will not spare him.

Later, Malishka meets Rishi and his family to give the invitation card of her fake marriage with Viraj. She shocks Rishi showing the card to him. She asks him how did he like it. Rishi is speechless. Lakshmi likes the card, just like Virender and Ayush. Virender is relieved that Malishka is now really moving on and got over Rishi. Rishi wants to know why is Malishka proceeding with the marriage with Viraj, when he has promised her of their secret marriage. He wants an answer from Malishka.

Virender tells Malishka that her one decision will destroy three lives, she has to make the right decision in her life. He asks her to take advice from her elders. He adds that he thinks the best for her. She thanks him for being so considerate. She lies that she really wants to marry Viraj, she knows that Rishi won’t come back to her after a year. He wants to believe her. She tells that she wasn’t upset with anyone at the mall. She assures that Lakshmi will be happy, and even she will be happy. She asks him not to tell anything to Rishi about their meeting. He thanks her that she relieved him. He feels Rishi and Lakshmi will never get separated now.

She tells that she lost her family, she got a new family after marrying him, she got all her relations just because of him. She tells that Rishi is a blessing for her, he shouldn’t ever tell her anything wrong. She feels hurt. He tells that he doesn’t understand what is he doing and why, when he doesn’t intend to hurt her. He can’t tell her about Malishka and him. She asks him not to worry so much. She promises to never scold him. He doesn’t think she is understanding. She apologizes to him. She asks him if she did anything wrong. He tells that he is at fault. She asks him if he believes he is lucky to marry her. He nods in reply.

She asks him to always remember this, their marriage is a big blessing for her. He tells her that he went to the mall with Malishka without telling her. She doesn’t want to ask or know anything about it. She tells that she felt good that she didn’t let Malishka feel alone, he did right to accompany his friend. She finds him caring a lot for her. She likes his care. She tells that he was missing her at the mall and selected a dress for her. Karishma calls Lakshmi for a talk. After Lakshmi leaves, Rishi weeps in guilt. Malishka fumes on remembering Virender’s words. She admits that she is pressurizing Rishi, but Rishi’s family is wrong in this situation, they did injustice with her.

She feels she isn’t doing anything wrong, Rishi was just of her, but then his family brought Lakshmi in his life. She feels everything did wrong with her, even she had stooped to this level to get her love. She feels frustrated. She tells that she would have died with Rishi if she failed to save his life, but at least they would have been together. She feels sorry that she has changed, because his family forced him to change. She tells Rishi that she is going to cheat him. Later, Lakshmi finds Rishi upset.

She tells Rishi that their relationship has turned more strong now. She reminds him that they fight like a typical husband and wife, its actually good that they are coming closer. She makes him smile. She compliments him. Rishi wonders what’s happening to him. Lakshmi goes to help Ayush in his work. He complains about Shalu. He asks if Shalu is her adopted sister. She jokes first by agreeing to it. She tells that Shalu is her real sister. He tells that Shalu doesn’t like him, she always fights with him. Lakshmi tells that Shalu is choosy since childhood. She adds that Ayush and Shalu are really sweet and similar in nature. Ayush smiles thinking of Shalu. He thinks to gift her a dress to Shalu.

Rishi thinks he has to control his feelings, else he will have more care for Lakshmi. He avoids Lakshmi and tells that he has much work. Shalu gets happy when she receives Ayush’s call. Shalu answers the call. She argues with Ayush so much that he disconnects. Shalu calls back Ayush. He disconnects again and irritates her. Shalu calls him and apologizes. Malishka lies to Kiran and hides the invitation cards. She apologizes to Rishi that she isn’t keeping her promise. She wants to break his relation with Lakshmi in just two days.

Reviewed Rating for Bhagya Lakshmi 18th December 2021 Written Update Unhappy Rishi: 3/5 This rating is solely based on the opinion of the writer. You may post your own take on the show in the comment section below.