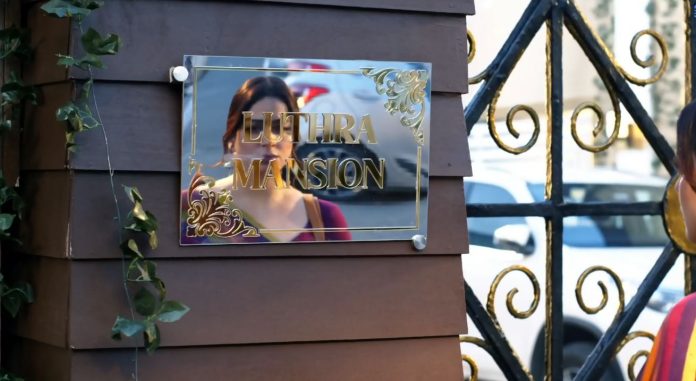 Kundali Bhagya 17th December 2021 Written Update Preeta arrives Sherlyn asks Prithvi if Mahesh will die unknowingly by their plan of keeping him in the mental asylum. She tells that the tortures might kill Mahesh. Prithvi tells that he knows what he is doing, Mahesh will not die so soon, he is writing Mahesh’s fate and he will decide until when to keep Mahesh alive. He adds that the Luthras don’t know the real attacker, they think that Mahesh has turned mad and is attacking Mahesh, but actually Mahesh is the victim.

He tells that very soon he will snatch everything from the Luthras, even the Luthra mansion, and there is no contender to challenge him this time. He tells that he had taken over the business already from them. He has got everything transferred to his name. Preeta lies to Shrishti about visiting a patient at home. She lands up at Luthra mansion to meet Mahesh. Preeta will get back to Luthra mansion just for the sake of Mahesh. She will claim her rights on Karan and the Luthras, just to stay there and protect the family from evil Prithvi and Sherlyn. Keep reading.

Earlier in the show, Preeta returns to the clinic to see the patients. She stays disturbed thinking of Mahesh. She wants to finish her work and just leave early. Shrishti calls her again. Preeta tells that she will get late today, she is going for a home visit, its an old patient. She leaves for Luthra mansion.

Sarla tells Biji that Preeta doesn’t have Karan or any Luthra in her life. She doesn’t want Preeta to return to Luthra mansion. She tells that Preeta have given a lot to the family, but they didn’t understand her ever, they just gave her sorrow. Preeta reaches Luthra mansion. She has memories of Karan and the family. She recalls the way she was ousted from the house after Karan and Rakhi asked her to leave.

She enters the house and meets the new staff. She tells that she wants to meet the family. The guard asks her to show the appointment letter if she as to meet someone. He tells that she needs Prithvi’s order if she wants to go inside. She asks him what is he saying. He tells that she can’t go inside without Prithvi’s permission. He asks her to leave, or at least get aside, Prithvi’s car is coming. Preeta hides behind the gate and sees Prithvi arriving home. She can’t believe his golden days in the Luthra house. She thinks how did Prithvi return to Luthra house when he was jailed. She wants to know what’s happening.

She thinks the house entirely changed in two years, Prithvi has become the owner. She wants to find out. Prithvi senses someone behind. He turns but doesn’t see Preeta. He asks if someone had come. The guard tells that a girl had come and wanted to meet the family. He thinks if Preeta had come. He doesn’t want Preeta to come in front of him, else he will make her life hell. Preeta finds the other way to enter the house. She gets inside the house by the backstairs and then jumps through the window.

She recalls her beautiful memories with Karan. She wants to find Mahesh and save him, since he had asked her help against Prithvi. She looks at the house which changed totally. She wants to see where is the family. Prithvi rebukes Girish. Girish tells that Sameer is unwell, he had gone to give medicines to Sameer. Prithvi asks him to just work for him, not for any Luthras. He rings some bell and summons all of the Luthra family. The Luthras align themselves in a linear form and take Prithvi’s instructions.

Prithvi tells them that puja doesn’t happen in the house. Kritika tells that he doesn’t like any puja. He scolds her for cheating him by supporting Preeta. He calls her a big fool. He ill-treats the Luthras like servants. Sherlyn tells that Prithvi doesn’t like to do puja because he doesn’t want to pay the pandit. He tells that he likes money incoming, not outgoing. He adds that no doctor will come home to see anyone again. Kritika requests him to let Sameer get the necessary aid, he is really ill.

He tells that Sameer won’t die by fever, he can have medicines and get fine. He shouts on them, that he is already spending a lot of money on Mahesh’s health. Preeta is shocked to see Prithvi ruling over the family. Prithvi tells that he shall dump them into some bin. Rakhi tells Kareena that she will go and get food for Mahesh. Kareena consoles Bani. Girish apologizes to them for telling Prithvi about the doctor. Preeta wonders why is Prithvi dominating everyone, and scaring them. Rakhi tells Sherlyn that she wants to feed the food to Mahesh, but he is living in the basement. She is scared to go there alone. She asks Sherlyn to come along. Sherlyn tells that she will give the food to Mahesh. She adds that Mahesh reacts angrily on seeing them.

Prithvi tells Sherlyn that Mahesh can’t attack her in anger, he can’t afford her treatment. He adds that Sherlyn is also a burden, since her husband abandoned her and never looked back. Preeta wonders if Rishabh didn’t come back home after going to London two years back. She thinks if Rishabh had ended his relation with Sherlyn. Prithvi tells that Mahesh had turned mad, but before that, he gave the signing authority to him. Karan comes to the family and asks Bani why is she crying. Prithvi tells that Bani is crying for her mentally unstable son. Karan asks him to mind his tongue. Prithvi angers him further.

Karan warns him not to say anything against his dad. Prithvi asks Karan what can he do. He reminds that Karan is just an ordinary employee in his company. He shows his deciding powers. He threatens of firing Karan from the job. He knows that Karan wants to do the job and keep an eye on him. He doesn’t want Karan to forget that he is the owner of the house. Karan tells that Mahesh has given everything to him in charity. Prithvi tells that he would have shown Rishabh his right place too. Karan shouts on him.

Prithvi tells that if Mahesh dies, then Karan and Rishabh will get the property back, that’s why he will keep Mahesh alive and keep the authority in his hands. He knows that Karan loves Mahesh and wants him alive. He also wants Mahesh to stay alive. He asks the family to explain Karan his limits. Preeta cries watching the Luthras in much pain. Prithvi stops Kritika and reminds her that he is her husband. He doesn’t forgive her for the big cheat that she supported Preeta against him.

Reviewed Rating for Kundali Bhagya 17th December 2021 Written Update Preeta arrives: 2/5 This rating is solely based on the opinion of the writer. You may post your own take on the show in the comment section below.