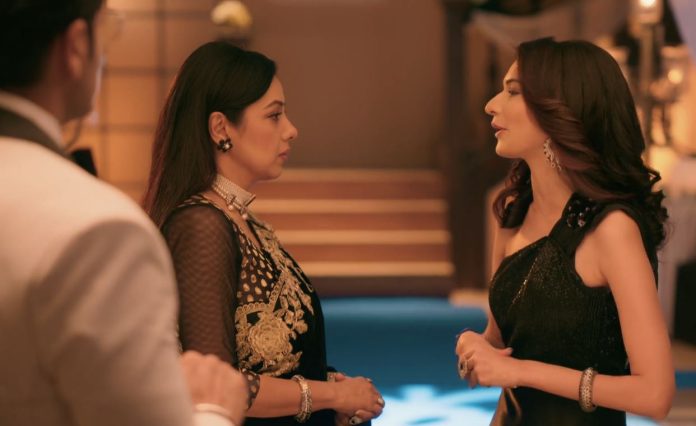 Anupama 18th December 2021 Written Update Upsetting Kavya asks Anupama about Malvika. Anupama tells that she has no idea about her. Kavya asks her to find out, because Anuj has hidden about Malvika for 26 years. She feels all the men are same. She tells that Vanraj is feeling jealous seeing Malvika with Anuj. She finds it better. Malvika asks Anuj to come for a dance. Anuj refuses first, and later agrees for the dance. They happily dance on their union after a long time. GK is very happy and dances with the children. He wants them to always stay united. Malvika tells that she is very happy today. Anuj is also happy that Malvika is back in their lives.

Vanraj worries seeing their closeness. Kavya goes to make Vanraj more jealous. Shahs want to know the relationship between Anuj and Malvika. Anuj doesn’t see Anupama, Vanraj and the Shahs waiting. Malvika tells that she forgot to introduce them to her guests. He is shocked to see Shahs. Malvika takes Anuj to them. She tells Vanraj that she is really happy to meet his family, but wants him to meet her life, her everything, her elder brother Anuj. Shahs are surprised to know their relationship. Anuj gets emotional with Malvika’s introduction.

Vanraj asks Malvika is Anuj his brother. She tells that she calls Anuj by his name. She asks if they already know Anuj. Samar tells that they know each other well, but never heard of her from Anuj or Vanraj. Kavya wishes that Malvika was Vanraj’s sister. Malvika asks them why did they keep her a secret. Vanraj tells that he kept the deal a secret to surprise his family. He introduces his family to Malvika. Kavya tells that she is Vanraj’s wife Kavya. Malvika asks Vanraj how does he know Anuj. Vanraj tells that Anuj and his ex-wife are friends and business partners. Malvika tells that he is so cool to invite his ex. She loves his family.

She compliments Kavya and Kinjal. Kavya gets angry seeing Malvika’s sweet behavior. Malvika is happy to meet a big happy family after a long time. Anuj feels tensed to answer Anupama about Malvika. Anuj tells Malvika about Anupama. Malvika can’t believe that Anupama is finally in Anuj’s life. She happily hugs Anupama, who had always been Anuj’s love. She tells that she knows her well, she met her many times because of Anuj’s poetry and love for her. Malvika tells that she told Anuj to not tell anyone about her.

Anupama finds her really cute and compliments her. Malvika praises Anuj who is dashing like a filmi hero. She finds his poetry poor. Anupama tells that he does nice poetry, she had heard it. Anuj asks Malvika to stop embarrassing her. Malvika asks Vanraj to come with her for the photoshoot. She doesn’t like formalities in the business. Kavya argues with her, but the latter takes Vanraj with her. Anupama asks Anuj to say if he wants to. Anuj tells that he wanted to tell her, but couldn’t. He asks her to trust him. She tells that she trusts him, she won’t ask anything until he decides to tell her.

Malvika asks Vanraj if he is shocked to know that Anuj is her brother. He replies with a yes. She tells that its awkward that Anuj loves Vanraj’s ex. He tells that he doesn’t find it odd now. Kavya watches them laughing and wants to punch Malvika’s face. Anupama misunderstands Anuj. Anuj tells that he wants to share everything of his life with her. She asks him why did he hide about his sister. She apologizes. She tells him that she felt bad by his secret keeping.

Reviewed Rating for Anupama 18th December 2021 Written Update Upsetting: 3/5 This rating is solely based on the opinion of the writer. You may post your own take on the show in the comment section below.