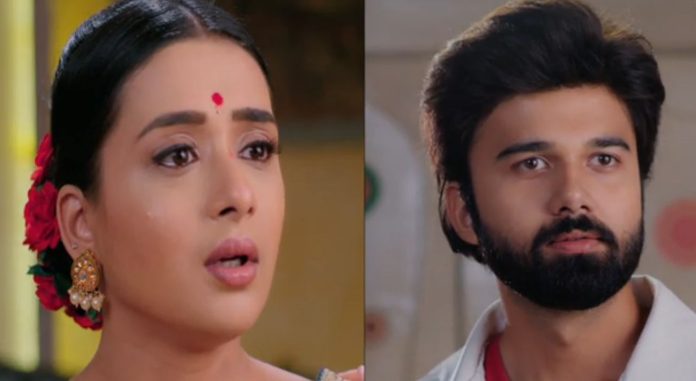 Sasural Simar Ka 18th December 2021 Written Update New vow Aarav returns home in the morning. Sandhya and Badimaa are relieved to see him fine. They question about his absence at night. Aarav tells that he wanted to stay out of the home at night. He adds that he has lost his life’s meaning, he has nobody to care for him, and even he doesn’t care for his life. He apologizes to them. Badimaa is happy that he is safe. Mohit couldn’t harm Aarav. Chitra asks him how will he kill Aarav. She scolds him for failing in his love. She asks him how will he proceed.

Simar tells that she has agreed by her self will. Yamini tells that nobody will get her married against her will. She asks Simar to tell the truth. Indu watches Yamini instigating Simar. Simar introduces Indu to Yamini. Indu asks her how did she come home. Yamini tells that she came to know about Simar’s roka with Samar. Simar drops the tea cup by mistake. Indu tells Yamini that things once broken can’t be fixed. She angrily taunts Simar and goes away with Yamini, leaving Simar alone. Aarav gets restless that he lost Simar’s mangalsutra. He thinks he left it at Yamini’s house.

Yamini defends Aarav when Indu tells how Simar was insulted and ousted from Oswal mansion. Yamini tells that she knows the pain of a heartbreak, she has seen Aarav and Simar’s pain. She tells that she is also like Simar’s mum. Indu asks her to leave if she wants to defend Aarav. She doesn’t entertain Yamini and asks her to go away. Samar finds Yamini in the house. He regrets that she chose Aarav over him. He asks Yamini not to explain him anything. She tells that she didn’t choose Aarav between Aarav and him. He tells that he loves her as a son, and wanted to bring Simar to her house after the marriage, but now he won’t.

Yamini wants to explain him that she supports true love. She doesn’t want Aarav and Simar’s love to lose. Reema meets Simar to share some facts. She tells that Aarav had agreed to move on, but when he knew that Simar came to meet him, he had lost his mind again. She blames Simar for provoking Aarav. She tells that Aarav had got overdrunk and didn’t return home at night. She asks Simar if she wants to become a reason for Aarav’s destruction. Simar tells that she wants Aarav’s betterment. Reema asks her to just do the right. Yamini finds Aarav home. He asks for the lost mangalsutra. She promises to save Aarav and Simar’s relation.

Reviewed Rating for Sasural Simar Ka 18th December 2021 Written Update New vow: 3/5 This rating is solely based on the opinion of the writer. You may post your own take on the show in the comment section below.