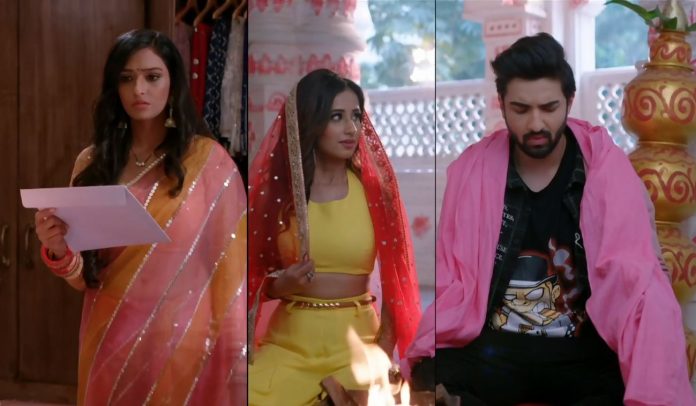 Bhagya Lakshmi 20th December 2021 Written Update Surprise Wedding Lakshmi sweetly warns Rishi that she will not spare him from her scolding if he tells anything wrong about himself. She tells that she will not forgive him if he deliberately does some mistake, knowing the consequences in advance. Later, Rishi questions Malishka on seeing the wedding invites. He asks her what is she doing. She tricks him and takes him to the temple with her, stating that they will be doing a puja together. She bribes a pandit and asks him to just get Rishi and her married by lying to him. He asks her what is she saying, how can she marry without letting her groom know about it.

Malishka hands over a bundle of notes to him, and convinces him to lie to Rishi that the marriage mantras are just meant for a puja. Lakshmi gets to see another card brought by Malishka for Rishi. She is stunned to see Malishka weds Rishi written on the front side. She doesn’t understand how can Malishka make such a big mistake in printing the card. Malishka forces Rishi to sit in the mandap with him. She tells him that its just a puja.

Rishi asks her about the puja’s sudden necessity. He wants his answers and doubts that she is upto something. He gets rigid to know the truth. Malishka unwillingly tells him that she had planned their surprise marriage. Rishi is shocked to know this and leaves from the mandap, saying he can’t marry her this way, it will be cheating towards Lakshmi. Malishka gets angered on knowing his feelings for Lakshmi again, and leaves from the temple.

Earlier in the show, Rishi thinks he has to control his feelings, else he will have more care for Lakshmi. He avoids Lakshmi and tells that he has much work. Shalu gets happy when she receives Ayush’s call. Shalu answers the call. She argues with Ayush so much that he disconnects. Shalu calls back Ayush. He disconnects again and irritates her. Shalu calls him and apologizes. Malishka lies to Kiran and hides the invitation cards. She apologizes to Rishi that she isn’t keeping her promise. She wants to break his relation with Lakshmi in just two days.

Lakshmi meets the chef who is called home to make the cakes for the family. Lakshmi and Rishi get into a cute moment. They later that the chef has to leave to meet his little daughter. Rishi asks the chef to go home and meet his daughter, he will make the cup cakes for Karishma and himself. The chef thanks them and leaves. Rishi asks Lakshmi to learn making cupcakes from hm, he won’t be making it every time. Rishi and Lakshmi make the cupcakes together. They spend time and come close. Virender is glad to see the cute moments forming between them. He wishes that they always stay together.

Lakshmi likes Rishi’s gesture when he cares for her and helps her. Rishi teases Lakshmi and spoils her hair. Lakshmi also runs after him to spoil his hair. Virender laughs. They both reach Virender while fighting. Virender thinks of making Neelam happy by baking the cake for her. Rishi tells Neelam that Virender is calling her to the kitchen. Neelam goes to the kitchen. Virender also tries Rishi’s trick. He asks Neelam to take revenge by spoiling the cake batter to his hair, as he applied it to her hair. She asks him to let the chef do the work. Virender fails to impress her. Lakshmi and Rishi wash their hair.

Bani asks Shalu to call Ayush and talk to him. Shalu misses Ayush, but doesn’t admit. Bani asks her to speak to Ayush and express herself. She teases Shalu. Shalu tells that Ayush is rude, she doesn’t want to talk to him ever. Malishka arrives home and meets the family. Ayush gets puzzled seeing Virender welcoming Malishka heartily. He wonders what’s happening. Lakshmi meets Malishka and asks her to come for breakfast. Malishka tells that she has to talk to Rishi first. She shows Rishi and her wedding card to him, and shocks him. Rishi asks her if she has lost her mind. Neelam and Malishka bump their heads when they try to pick the fallen card. Rishi hides the card.

Rishi distracts them by telling about Lakshmi’s black dog story. Karishma gets to laugh on Lakshmi’s beliefs. Virender doesn’t want Lakshmi to get sad. He cheers up Lakshmi. Malishka tells Neelam that she has to discuss something important with Rishi. She takes Rishi with her. Lakshmi thanks Virender for lying and supporting her. Virender and Ayush believe Lakshmi. Karishma tells that Sonia has gone out with her friends. Rishi takes Malishka to his room and scolds her. She tells that it was a surprise for him. He asks her why did she show the card in front of everyone. He tells that she is giving him stress. She doesn’t fight him, just to win his heart. Keep reading.

Reviewed Rating for Bhagya Lakshmi 20th December 2021 Written Update Surprise Wedding: 3/5 This rating is solely based on the opinion of the writer. You may post your own take on the show in the comment section below.