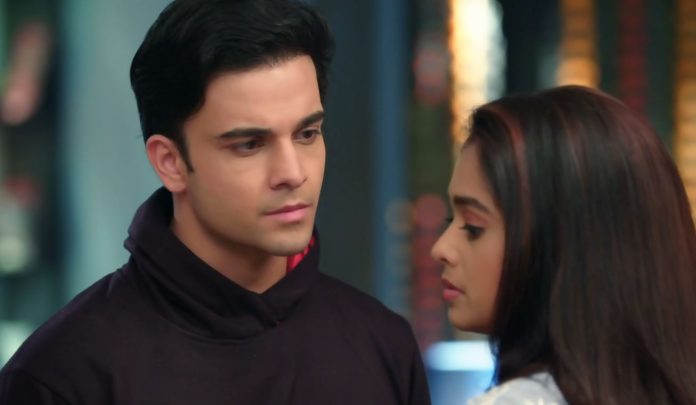 Kumkum Bhagya 21st December 2021 Written Update Intense Pallavi tells Aaliya that Prachi has the support of the law and also the NGO. She adds that Prachi will not leave the house so easily. She tells that its really tough to show Prachi the exit, Prachi is Ranbir’s legal wife and that’s the actual truth. Aaliya finds Rhea getting upset. She gives another hope to Rhea by sharing her plan. She tells that the police will not help Prachi if Rhea does things as she/Aaliya suggests. Rhea asks her what did she think, what is her plan. Ranbir and Prachi get into a moment, when he holds her hand and asks her not to go away from him.

Rhea loves Aaliya’s plan. She tells that Prachi will bite dust in the party tomorrow, and then she will leave the house herself. Prachi is ready to counter Rhea’s plans. She tells that she will fail Rhea and make her that the party becomes unforgettable for Rhea. Prachi and Rhea will have a intense clash, and a huge drama is coming up. Rhea is hopeful that Aaliya’s plan will work. Prachi thinks her idea is better and she will win. What will the sisters plan against each other?

Prachi tells that she has no mood to prove it again that she is Ranbir’s wife. She tells that Rhea will feel bad. She acts tired of the drama. She asks Rhea to explain it to Aaliya. She asks Rhea to just tell the truth without any melodrama. She taunts Rhea has much time to waste on such stories. She goes to take rest. Dida asks Ranbir to take a stand for Prachi. Pallavi argues with Dida. Ranbir stops Pallavi from hurting Dida’s sentiments. He tells that nobody will tell anything to Dida, else his anger will burst on them. He knows Dida has a soft corner for Prachi in her heart.

Prachi asks Dida if she is feeling that she has become so misbehaving. Dida asks her to just think of herself, not anyone else. Prachi doesn’t like to show this drama to Dida. Dida tells that she is hopeful that the house will get the lost peace back. She feels happy seeing Prachi showing Rhea her right place. She tells that she had tried to show Rhea’s truth to Prachi before, but Prachi didn’t realize it. Prachi regrets that she couldn’t see Rhea’s truth. Dida tells that she wants Ranbir to support Prachi. Prachi tells that she doesn’t want to ask for his support. She is glad that Dida is supporting her.

She asks Dida to bless her. Dida blesses her and promises that she will always be there for her. Aaliya tells Pallavi that she is tensed for Rhea, Ranbir is behaving so normal. Pallavi asks Aaliya not to blame Ranbir for Prachi’s return. She tells that Ranbir married Rhea as they wanted. Aaliya replies that he didn’t do any favor on them. Rhea asks them to stop arguing, Prachi will get happy to see them fighting like this. She tells that they have to make Prachi out of the house and also Ranbir’s life, that too legally. Pallavi tells that Prachi has the support of the laws and also NGO, she will not go away easily.

She hopes that Prachi doesn’t do any drama to insult her in front of her friends. She tells Aaliya that she has planned her friend’s birthday in the party. Aaliya asks her if she can come in the party. Pallavi asks her to join. Aaliya tells that she will come to keep an eye on Prachi, and protect Rhea’s rights. She feels sorry that she couldn’t attend Rhea’s marriage. She asks how did Prachi change so much. She asks Pallavi to take care of Rhea. Pallavi tells that Rhea is safe with her. She asks Aaliya not to worry.

Rhea asks Aaliya to come home on time tomorrow, because Prachi has challenged her that Prachi will oust her in three days. Aaliya asks Rhea to challenge Prachi back. Rhea tells that police will take action against them if they oust Prachi. Aaliya tells that police won’t do anything. She shares her plan with Rhea. She asks Rhea to wait for tomorrow. Rhea gets super excited for the easy plan. She knows that Ranbir won’t even realize this plan, and Dida will be helpless too, Prachi will be out of the house.

At night, Prachi feels hungry and goes to the kitchen to find something to eat. Ranbir meets her. He stops her with his rights. She asks him to leave her hand. He asks her not to go, he will make sandwich for her. She refuses to him. Prachi and Ranbir have a moment, when he reminds her the past togetherness. He makes a sandwich for her. He asks her to go to her room if she wants. He asks is she scared to thank him, or that he will ask her anything. He asks her what is her intentions, to trouble him or not. Prachi tells that she came to trouble him. He asks her to call the police and get him arrested.

Reviewed Rating for Kumkum Bhagya 21st December 2021 Written Update Intense: 3/5 This rating is solely based on the opinion of the writer. You may post your own take on the show in the comment section below.