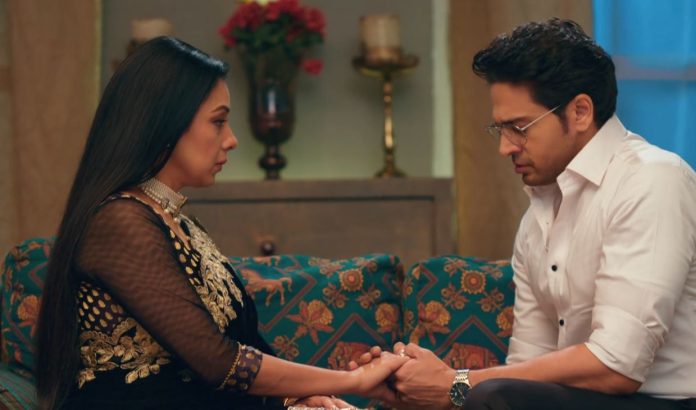 Anupama Anuj past twist 21st December 2021 Written Update Anuj and Anupama spend time together. He finds her upset. He knows that he had hid about Malvika and hurt Anupama a lot. Malvika asks GK about Anuj. GK tells that Anuj didn’t get married till now. She asks if Anupama also stays with Anuj. The Shahs have a good time, seeing the party pictures. Nandini asks Samar not to trouble Pakhi. They compliment Vanraj for throwing such a grand party. They feel proud of Vanraj. Vanraj ignores Kavya in front of the family. He tells that it’s a big thing to make his children proud of him. He adds that he had forgotten this feeling before.

Kavya thinks everyone forgets her all the time. Vanraj tells them that he has to discuss something important, they are attached to Anupama, they will always need her, Anupama has her own life, they should let her have a life, she has the first right on her life. He praises Kinjal who is just like Anupama, who is handling the house well. He doesn’t want Anupama to come home to sort their problems, but just to celebrate their happiness. Kavya gets angered seeing them. Vanraj tells that he couldn’t become a friend for his children so they shared everything with Anupama.

He promises that he will try to be with them as a friend, he will not become their enemy from now on. He tells them that he will always try to be close to them, he will give them time while handling his new business. His children are happy to join him. Kinjal thanks Vanraj for his attempt to fix relations with the family. She asks him not to neglect Kavya, who deserves a second chance. She asks him to try to forgive Kavya. Anupama tells Anuj that he has always supported her without any complaint or annoyance, he never counted his favors.

She wants to be understanding towards him. She knows that he had a reason for not telling her about Malvika. She tells that he is the right person, so his reason can’t be wrong. She assures that she will always be with him. She tells that she trusts him a lot. He thanks her for understanding him. He tells her that he will tell her everything about Malvika. GK tells Malvika about Anuj’s accident. He adds that Anupama had cured Anuj and stayed with him till now. Malvika tells that Anuj loves Anupama. She wants to know if Anupama feels something for Anuj or not. GK says that he doesn’t know anything.

Vanraj feels sorry that he couldn’t forgive Kavya for her cheating. She gets the news video. He is happy to get the right publicity for their new project. Kavya pays attention to her beauty, when she grows insecure because of Malvika. Anuj tells Anupama that Malvika is the truth of his life, but there are bitter memories behind the truth. He tells that Malvika was always unpredictable, she left the house, he didn’t know if she will come back home, she had troubled the family a lot, but the family loved her a lot, Malvika was their world, their life was perfect until one day, it was his birthday, things changed.

He remembers his 25th birthday, when he danced with Malvika on her favorite song and celebrated with the family. He says that he got stubborn that he will go out and celebrate. He dragged the family for an outing, just because of his obstinate behavior, his parents met with an accident. He reveals the dark past. He says that he was riding his bike, they were in the car, he urged them for a race and put them into danger. He narrates the incident to her. He breaks down. Anupama consoles him. Stay tuned.

Reviewed Rating for Anupama Anuj past twist 21st December 2021 Written Update: 3/5 This rating is solely based on the opinion of the writer. You may post your own take on the show in the comment section below.