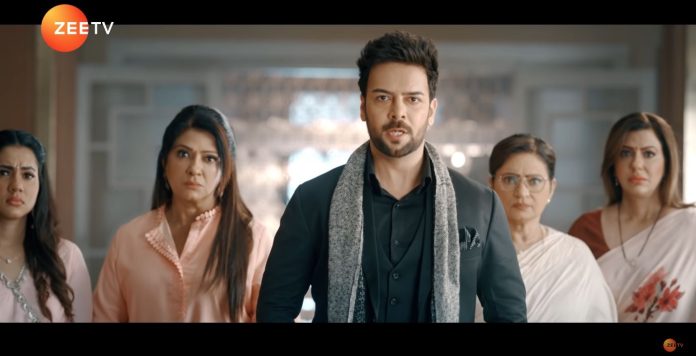 Kundali Bhagya 22nd December 2021 Written Update The End Sherlyn compliments Prithvi that he is looking more dashing and turned really smart since he got over his craze for Preeta. She tells that she used to hate the fact that he likes Preeta. She is really happy to see his serious and focussed side. He asks her to begin Karan and Natasha’s marriage arrangements. He asserts that once Karan gets married to Natasha, Preeta’s chapter will get closed forever, Preeta will be out of this house forever, it will be the end for Preeta.

Prithvi is confident that Karan will marry Natasha for the family’s sake. Sherlyn tries to convince Rakhi to get Karan remarried, because there is no hope of Preeta’s return. Will Karan agree to marry Natasha and fall into Prithvi’s trap? Will Preeta plan her re-entry in time in the Luthra mansion and save Mahesh, Rakhi and Luthras from the evil reigning duo Sherlyn and Prithvi? Keep reading.

Earlier in the show, Sarla tells that Preeta had gone away for two years, but after her return, she started thinking of Luthras in one day. She feels Luthras never deserved Preeta, Karan held Preeta responsible for Pihu’s loss and broke his relation with her. She never thought that she will need to tell Preeta. Preeta apologizes to Sarla.

Sarla advises her to not feel sorry for herself. She wants to tell her something about her elder sister Pragya. She doesn’t want Preeta to do the same mistake and undergo the same pain. Rakhi and Kritika meet Sherlyn in the kitchen. Rakhi apologizes to her. Kritika finds Rakhi hurt. She stops Rakhi from doing the work. She tells that she will assist Sherlyn in the work. Sherlyn asks Kritika to take Rakhi to the clinic. Rakhi refuses. Sherlyn insists them to go. Kritika takes Rakhi with her. Prithvi gets angry on Sherlyn’s move. Stay tuned.

Prithvi asks Sherlyn about Rakhi. She asks him to just control his nurse Mona, who had really wounded Rakhi. He tells that Rakhi should have been more punished. She asks him not to beat Rakhi, who is the only one who helps him in cooking. She tells that Bani and Kareena don’t help her in kitchen, Rakhi is the only one who cares for her and comes to cook. She wants Rakhi as her helper. Sarla tells Preeta about Pragya’s past. She knows that Mahesh met Preeta and asked her to come back home to save them, because Prithvi has taken over Luthra house and business.

She asks how can she go and save them, who is she for Luthras, did they try to find out who is Preeta, where did she go, why did they oust her from the house when they need her so much. She tells that she can’t stop Prithvi from his crimes, Prithvi won’t return their property and business to them on her saying. She add that Luthras love Karan and Rishabh, not Preeta. She asks Preeta not to miss them, not to go after those relations. She asks her not to love those relations, like Pragya did the same mistake, Pragya went back for Abhi, Aaliya and Tanu were against her, Pragya wasn’t alone, Abhi’s Dadi was with her to support, along with Purab and Bulbul.

She tells that Pragya fought Aaliya and Tanu, because of their support, Preeta has nobody with her, Abhi’s Dadi gave the property to Pragya, so Pragya went back to fix things, Pragya wasn’t ousted by Abhi, Pragya thought Tanu is carrying Abhi’s baby and sacrificed her love, when Pragya learnt that Tanu is lying about Abhi’s baby, Abhi was trapped by Aaliya and Tanu’s conspiracies, and then he got Pragya back in his life.

She tells that Pragya’s fight wasn’t easy, she used to cry a lot to win back Abhi, she paid a price by losing her peace and happiness. She asks Preeta how will she fight when Kareena, Bani, Rakhi and Karan aren’t with her. She remarks that nobody is on Preeta’s side, if Preeta goes back, then she will just hurt herself. She doesn’t want to see Preeta in tears. She tells that Prithvi is evil, and the Luthras are selfish and dumb fools. She tells Preeta that she is a worse situation than Pragya. She can’t see Preeta hurt. She asks Preeta not to go back home. She tells that she can’t lose Preeta like she lost Pragya. She begs Preeta not to hurt the family this way by taking a wrong decision. She cries in an emotional state. She asks Preeta not to be good always, and think of herself.

She asks Preeta to swear that she will not go back. Preeta hugs Sarla and consoles her. Preeta goes to the clinic. After her finishes her work, she leaves from her cabin. Just then, Kritika gets Rakhi to the hospital to get her wounds treated. Preeta sees them and hides. She asks the nurse to send the doctor to attend those patients. Nurse asks Kritika and Rakhi to come with them. Preeta stays there to know what happened to Rakhi that she has come to see a physiotherapist. She is shocked to hear that Prithvi tortures Rakhi and the family, he treats them like animals. Preeta feels sorry for them.

Kritika knows that Rakhi is tolerating the pain because of Mahesh. She can’t see Mahesh’s worst state, that he is chained in the basement and gets beaten up often. She knows that Prithvi had ordered the nurse to hurt Rakhi as well. Preeta learns the entire misery. Kritika promises that she won’t tell anyone. Rakhi tells that nobody should know about it, else Prithvi may behave more badly with them. Preeta cries for Rakhi. Rakhi asks Kritika to see who is outside. The doctor comes to attend Rakhi. Preeta leaves from there.

She asks him how will she do this. He asks her to throw a fake party for Natasha’s birthday. He tells his plan to get Karan intoxicated to get him trapped in the plan. He tells that they will send Karan and Natasha to the room which will be already bugged, Natasha will claim that Karan also loves her, she will tell everyone about their love night and compel Karan to marry him. He tells that nobody will listen to Karan, he will be helpless to marry Natasha. She tells that his plan is perfect, he has become really smart since he got over Preeta. He tells that once Karan marries Natasha, then the property will come on his/Prithvi’s name, and then Preeta’s chapter will be closed forever.

He asks Sherlyn to execute the plan. She tells that everything will happen as he wants. Preeta cries for Rakhi and Mahesh. She prays at the temple. She wants to know how will she save the family from the big problem. She doesn’t know why he fate brought her back. She still feels for the family. She tells that her heart has melted seeing the family back. She tells Mata rani that she is so just seeing the family in pain. She doesn’t understand why she is losing her sleep, she dreams of the people who hate her, who once loved her, but Mahesh and Rakhi still love her, if not Karan. She doesn’t think she can do anything against Prithvi, when the entire Luthra family isn’t able to do anything against him.

She wants to go back and save them, but she can’t go against Sarla, who is worried for her. She doesn’t understand why that family is calling her back. She doesn’t know if she should become a good daughter for Sarla, or a good Bahu for Mahesh and Rakhi. She asks Mata rani to guide her and bring her out of this dilemma. She prays for some help. She gets the sindoor on her forehead. She realizes that Matarani has guided her to return to Karan. She tells that she understood which way to go now. She thanks Mata rani for guiding her. She decides to go back to the Luthra family. Stay tuned.

Reviewed Rating for Kundali Bhagya 22nd December 2021 Written Update The End: 3/5 This rating is solely based on the opinion of the writer. You may post your own take on the show in the comment section below.