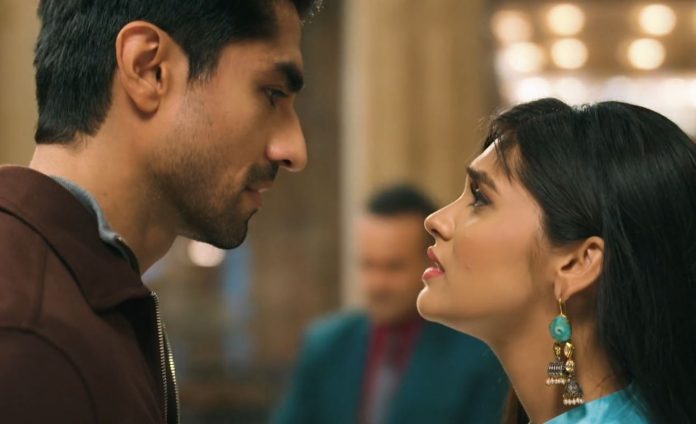 Yeh Rishta 22nd December 2021 Written Update Love Chaos Aarohi is seen performing the pre- marriage ritual of Birlas. Manjiri explains to Aarohi that “ladoo” signifies her happiness and “coins” signifies her fate. She further explains to Aarohi to be careful while hiding her fate in her happiness. The ladoo breaks, scaring and shocking everyone except Mahima. Aarohi looks here and there. Mahima asks Aarohi to not get worried as it’s just a ritual not life that everything should go perfectly. She tells Aarohi that being MBBS doesn’t mean that she would be able to perform every ritual perfectly.

Akshara says that the things can be renewed if they get destroyed. She suggests making the ladoos again. Akshara helps Aarohi in making the ladoo again. Unaware, Akshara indirectly performs the Birlas to be daughter-in-law’s ritual. While everyone feels happy seeing Akshara’s care towards Aarohi, Mahima feels irritated. At Birla hospital, a junior doctor asks Abhimanyu to return home. Abhimanyu refuses to return home, saying he has to work. Aarohi feels bored without Abhimanyu and entertainment. She sees Mahima and recalls her words about her being just an MBBS.

Aarohi checks MD course in Manipur medical college. Seeing the last date gone, Aarohi calls the college office and asks if she could still get admission. College staff allows her to take admission with late fees. Aarohi disconnects the call and thinks Abhimanyu will support her course/education after marriage. She turns and gets shocked to see Mahima standing behind her. Mahima asks Aarohi what she is doing and asks her to come as the marriage date is getting fixed. Aarohi leaves thinking she will give Mahima a big shock. Mahima smirks thinking that it’s time to give a shock. Harshvardhan rejects the first decided date i.e.16th January saying there is an important seminar on that date.

Pandit Ji gives 23rd January. Anand and Harshvardhan say they have an important kidney transplant on that date. Kairav says this will go on whole life and says they should decide on one of the two dates Pandit ji told. Harshvardhan says, a lot of work and heavy schedule goes on in the medical field. Kairav asks if Medical is business. He says poor people’s life also goes on in simple life. Harshvardhan says medicines treat and save people’s lives. Kairav says food is also important for people’s life as only medicines can’t keep people alive. He says every type of work is important. Akshara feels worried seeing Kairav and Harshvardhan’s argument. Mahima says this can be discussed later, for now they should fix some dates for marriage.

Manjiri thanks Mahima for handling everything. Swarna says another date of 25th January is there for marriage. Everyone agrees to this date and congratulates each other. Harshvardhan and Anand open a champagne in happiness, making Manish and Suhasini awkward. Manjiri wishes Abhimanyu could be present at this moment. Aarohi says Abhimanyu may be busy with his work. Goenkas dance and celebrate. Harshvardhan and Anand feel awkward. Neil tells Akshara he is feeling something off/wrong. Akshsra assures Neil that everything will go fine.

With a heavy heart, Akshara shows happiness and dances with Aarohi for her family’s happiness. She collides with Abhimanyu while dancing. Both Abhimanyu and Akshara get lost in each other forgetting other people. Abhimanyu takes Manjiri’s blessings and dances with everyone with a heavy heart. He doesn’t dance with Aarohi. Akshara stands with Goenkas and Aarohi stands with Birlas for a family photograph. Mahima announces that Akshara will join Birla hospital as the head of music therapy department. She says they will be introducing Akshara’s music therapy in Birla hospital. Mahima tells Akshara that it’s a big opportunity for her to take her music therapy to heights.

Mahima asks everyone to think about how much Akshara’s music therapy will benefit patients as it showed great effect on Manjiri. She tells Akshara that she is offering her to join the Birla team. Everyone feels shocked and surprised. Anand says how will it happen? Mahima says that they should forget whatever happened as both the families are going to get related now. She says both family’s talents should be used at one place only. Harshvardhan asks Mahima what is the need for it? Mahima tells Harshvardhan that it will benefit his PR a lot and asks him to trust her. She asks Akshara if she agrees to her offer?

Akshara looks at Abhimanyu and Kairav. Kairav asks Mahima to give Akshara some time to think. Electricity goes off when Goenkas starts leaving. Everyone gets busy in search of MCB. Abhimanyu takes Akshara aside and asks her why she came to his house? He says to Akshara that he thought she would not come to Birla house after whatever happened. Akshara asks Abhimanyu how it matters to him. He tells Akshara that he doesn’t know what she is made up of, that nothing affects her. Abhimanyu says he gets affected. He asks Akshara to reject Mahima’s job offer as he doesn’t want to see her near him anymore.

Abhimanyu tells Akshara that he wants to move on as she only asked him to. He asks Akshara to remember that he is getting married now. Abhimanyu switches on the lights and leaves. Akshara feels emotional but controls herself. Next morning, Abhimanyu gets distracted before surgery hearing someone singing and gets injured. Aarohi asks him to get a bandage applied as she will handle other things. Abhimanyu thanks her and follows the singing voice in Birla hospital. He reaches a room and witnesses Akshara singing. Akshara is seen singing for patients wearing Birla hospital’s identity card.

She sees Abhimanyu staring angrily at her. Through his thoughts, Abhimanyu asks Akshara why she joined Birlas hospital, when he asked her to reject Mahima’s job offer. Akshara asks Abhimanyu to accept the truth that she will be working in Birla hospital only, through her thoughts. Abhimanyu asks Akshara if she can come outside for a minute. Akshara goes outside with Abhimanyu. Mahima watches them and thinks love doesn’t get less/affected with time. Akshara knocks on Abhimanyu’s cabin to ask his permission to get inside.

In the next episode, Akshara will request Abhimanyu to behave normal for their families, forgetting the past and start afresh. Abhimanyu will twirl Akshara saying that he is behaving completely normal. Aarohi will be seen outside Abhimanyu’s cabin. Manjiri will shock everyone by saying that they need to postpone the marriage date. Suhasini will ask Manjiri if they want the marriage to happen or not.

Reviewed Rating for Yeh Rishta 22nd December 2021 Written Update Love Chaos: 3/5 This rating is solely based on the opinion of the writer. You may post your own take on the show in the comment section below.