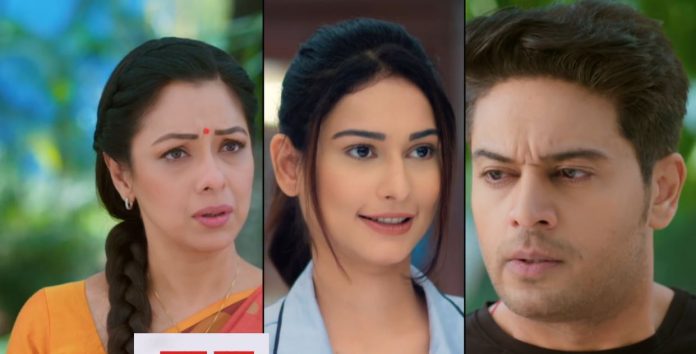 Anupama asks Anuj if a person ever feels bad with own family’s words? Anuj tells Anupama that she is a good person even more than required. He stops while saying that he loves her. Anuj leaves the room and Anupama also thinks the same about Anuj. She likes the tea made by Anuj. At Shah house, Kavya can be seen exercising vigorously. Kavya falls down with a cramp and Baa runs to her. Baa tells Kavya that the cramp must have come because of her 2 hours vigorous and continuous exercise. She asks Kavya why she is exercising a lot? Kavya asks Baa how she and Anupama keep her hair and skin so young even when they do not exercise or visit the salon.

Baa leaves and Kavya realizes that everyone likes Anupama as she is a good hearted person. She thinks Anupama didn’t care about skin and age but about a good heart. Kavya thinks what she can do as any woman will naturally feel insecure seeing a woman even younger to her. All Shahs can be seen sitting at the dining table together for dinner. Vanraj sits at his place and Pakhi praises his looks. He tells Pakhi that he always looks good. Mamaji jokes, Kavya serves food to Vanraj. Kinjal asks Vanraj if his work started from today. Vanraj replies yes. Kavya calls Vanraj, “Raj” and asks where his office is located?

Vanraj tells everyone that for now he will be working from Anuj’s office. Kavya asks Vanraj will he be fine working at the same place as Anuj and Anupama. Vanraj says he is fine with it as he can’t afford to waste time in setting up a new place for work. Paritosh says it is good that both brother and sister will be operating from the same place. Samar says it means both Anuj and Malvika are brother-sister as well as competitors. Vanraj replies correctly. Mamaji asks Vanraj if he will have to manage the cafe alone? Vanraj tells Mamaji that Kavya will help him. Kavya gives a shocked look. Vanraj tells Kavya that she only wanted a job and he is giving her a full set up business. He says congratulations to Kavya.

Bapuji looks and understands the differences going on in between Vanraj and Kavya. Kavya asks if he thinks she did MBA to serve coffee. Vanraj tells Kavya that she can keep herself busy with Cafe work till she gets a new job. Kavya tells Vanraj that he is talking like he cares for her a lot. Vanraj tells Kavya that she has a problem, if a person thinks about her and even when the person doesn’t think about her. He tells Kavya that it’s her choice if she wants to handle the cafe or not. Paritosh asks Vanraj can he handle the cafe if Kavya doesn’t want to? Vanraj permits Paritosh, saying that it’s everyone’s (whole shah family’s cafe). Samar says it’s cool that both brothers will work at the same place.

Kinjal feels good. Kavya congratulates Paritosh for getting a chance to handle the cafe in begging. Kavya’s words pricks shahs a little. Paritosh replies to Kavya that he got Rakhi’s job in begging but Cafe is his father’s only. Kavya tells Paritosh that she thought he was a little sensible. Paritosh says to Kavya that he thought that she would have improved a little now. In a joking manner, Vanraj asks Kinjal and Paritosh to work in a cafe and not only have coffee dates with each other. Everyone laughs. Kavya thinks even god can’t see her as she has no work/job to do.

On the other hand, Anuj praises the pan cakes made by Malvika. He tells Malvika that Anupama more tastier chocolate pan cakes. Malvika feels bad hearing it. Kinjal and Paritosh reach the cafe and the former wishes the latter “All the best”. Nandini and Samar welcome Paritosh inside the cafe with a bouquet. All of them discuss that everyone has to start with step one to move forward towards success. Paritosh says now he will not feel frustrated and find the jobs he likes with patience. He says he will try to grow Vanraj’s cafe. Kinjal, Nandini and Samar motivate Paritosh for his cafe work. Paritosh feels good and calls Kinjal his lucky charm.

Kinjal leaves for her job giving a flying kiss to Paritosh. He listens to Rakhi Dave’s taunting voice note and gives her a befitting reply through another voice note. Malvika angrily asks Anuj if he likes Anupama’s cooked pancakes more than hers. She angrily tells Anuj that he should have asked Anupama to cook instead of her then. Malvika gets very angry and Anuj tries to calm her. She throws the glass aside and asks Anuj to not even drink water brought by her as it won’t taste better than the water brought by Anupama. Anuj shouts at Malvika and asks her to control herself. He explains to Malvika that he wasn’t comparing her and Anupama’s food.

Malvika shouts and tells Anuj that he remembered pancakes made by Anupama while eating the ones made by her because he likes Anupama’s pancakes more than hers (i.e. Anupama’s pancakes are better than hers). She throws and breaks things. Anuj again shouts at Malvika and asks her why she is disrespecting food. He tries to calm Malvika by dancing and apologizing to her. Malvika tells Anuj that he always makes mistakes and then apologizes for it. She tells Anuj that his realization of mistake can heal the wounds he gave to others. Malvika reminds Anuj that he did the same at the time of Akshay. Anuj gets shocked hearing Akshay’s name from Malvika.

Anupama feels confused and thinks if she should go and see what is happening between Anuj and Malvika and why they are shouting. She stops thinking that Malvika may feel bad with her interference. Anuj cries and asks Malvika to not speak like this. Malvika tells Anuj that she loved Akshay a lot and he was everything for her. She reminds Anuj that he distanced Akshay from her because he didn’t like him. Malvika says she returned to him forgetting everything as there is nobody else than him who is hers. She tells Anuj that now he has someone whom he loves even more than her.

Malvika tells Anuj that she doesn’t want to become his responsibility instead of family. Anuj tells Malvika that she is thinking wrong. Malvika tells Anuj that he knows what is the truth. She says she is leaving the house. Anuj tries to stop her saying that he will not be able to live without her and will remain guilty if she leaves this time too. Malvika runs out of the house. Anuj runs after Malvika. Anupama sees them running out of the house. She tells GK that Malvika talked about leaving the house while arguing with Anuj. Anupama asks GK to go and stop Malvika. GK says nobody can stop angry Malvika. He tells Anupama that Malvika ran away earlier too and returned after 10 years.

GK says to Anupama that he fears if Malvika will ever return or not? Anuj runs on the streets and searches for Malvika. He recalls his and Malvika’s brother-sister moments. Anupama comes with a car. She asks Anuj to come inside the car. Anuj ignores Anupama and runs on the streets in search of Anupama. He gets out of control. Anupama tells Anuj that they will search Malvika and not let her leave/go away this time. Both Anuj and Anupama try to search Malvika. Anupama gets emotional seeing Anuj’s yearning and concern towards Malvika. In the next episode, Malvika will be seen drinking a full bottle of water in Shah house. She will shock the Shahs by asking for Baa’s permission to stay at Shah house. Anupama will ask Anuj about Akshay.

Reviewed Rating for Anupama 23rd December 2021 Written Update Past truth: 3/5 This rating is solely based on the opinion of the writer. You may post your own take on the show in the comment section below.