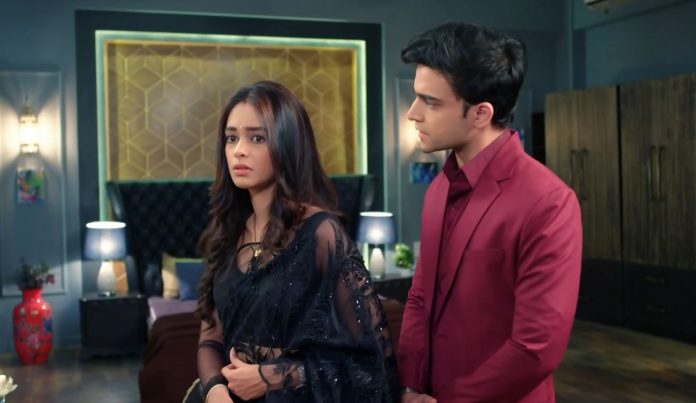 Kumkum Bhagya 24th December 2021 Written Update Party twist Rhea returns home after meeting the lawyer. She tries to insult Prachi and break her down, just to get the legal documents, the guilt admittance papers signed. She tells Prachi that she is Ranbir’s pride, whereas Prachi is his guilt. Prachi cries on the insulting remarks. Ranbir finds Prachi upset. He tells her that life is good, though the people they met in their lives aren’t good. He adds that they couldn’t keep relations well but they can still live happy. Later, Pallavi also insults Prachi in the party. Prachi gets provoked to answer back Pallavi.

She gives a befitting reply to Pallavi to shut her up. She tells that those who do wrong get their mouth shut. She taunts Pallavi to remind her her old actions. She tells that Pallavi knows this the best. Pallavi doesn’t understand how she had wronged Prachi. Prachi hints about Pallavi and Rhea’s planning to frame Siddharth and her. Pallavi doesn’t know that Rhea had used her name in the evil plot. Will Rhea succeed to take Prachi’s signs on the legal papers? Will Prachi act alert and save herself from getting ousted? Keep reading.

Earlier in the show, Aaliya and Rhea meet their lawyer and get some documents prepared. Lawyer tells that Prachi and Ranbir’s relation will end without the divorce once she signs the papers. Aaliya asks Rhea to read the papers well. Lawyer asks her to read the clause. Rhea reads the declaration from Prachi’s side, that Prachi is calling her marriage fake and ending it by her own consent. She tells that Prachi won’t win. Aaliya tells that these papers will make Prachi out of the house forever. Rhea tells that they will plan this attack in the party itself.

Prachi asks Rhea did she solve the caterer’s problem. Rhea tells that she has come to question her relation with Ranbir, after all Prachi had a relation with Siddharth. Prachi asks her to mind her language. Rhea reminds that she has given a challenge to Prachi that she will oust her soon. Prachi asks her to pray that her good time comes. Rhea tells that she will not be good to Prachi. Prachi tells that Rhea was never been good to her. Rhea asks Prachi not to make the mistake of coming in the party. She tells that Prachi worked hard to get deck up, but Ranbir will not see Prachi. She tells that Ranbir will just see her, and introduce her as his wife, Prachi will feel odd in the family. She insults Prachi.

Prachi tells that she will get the limelight in the party, everyone will see her. Rhea laughs at her. The sisters continue to hurt each other verbally by their bitter arguments. Rhea tells that Prachi is an outsider. She asks Prachi to stay scared, she will be soon disowned by Ranbir. She hurts Prachi further by her taunt. Rhea tells that its actually Ranbir and her wedding reception party. She asks Prachi didn’t she know about it, Pallavi will introduce her/Rhea as Ranbir’s wife.

She tells that Ranbir and she will be the star couple, everyone will see their love today. She tells that she is Ranbir’s life and pride, while Prachi is his mistake and guilt. She warns Prachi against attending the party, outsiders aren’t allowed, but she can come to work as a waiter. Prachi tells that she will come to see Rhea’s tears when her dreams break down. Rhea asks her not to entertain herself with such thoughts. She tells that Ranbir will be just of her. She asks Prachi to let her know if she is coming in the party. She leaves. Prachi knows that the party is arranged to insult her.

She thinks Pallavi has organized Rhea’s reception party. Vikram and Pallavi attend the guests. Aaliya asks for Rhea. She compliments Rhea for her hardwork. Rhea tells Aaliya that she vented out her anger on Prachi, she has mentally disturbed Prachi, she won’t know what they will be doing with her. She wants Prachi to sign the divorce papers. Dida asks Vikram how is Pallavi liking Aaliya now. Vikram tells that Pallavi has forgiven Aaliya, who is Rhea’s Maayka. She tells that Pallavi didn’t forgive Prachi. He asks Rhea to call Ranbir. Pallavi introduces Renu and Rahul to the guests.

She asks Ranbir to get ready quickly and come. Prachi takes stress and feels hurt in her stomach. Ranbir finds Prachi angered. He thinks why is she so angry. He picks her earring to help her. He asks her not to get angry on herself. He hands over the earring. He tells that they can live life well. He advises her and goes. Prachi feels the pain disappeared when Ranbir came to pacify her. She tells that Ranbir ended her pain, she is actually feeling better because of him. She limits her feelings.

She asks the baby if he likes his dad’s touch. She doesn’t want the baby to depend on Ranbir. She tells that she will love the baby a lot and give her name to him. Pallavi introduces Ranbir and Rhea as a couple. She tells that its Ranbir and Rhea’s wedding reception. Ranbir makes a phone call excuse and goes away to Prachi. She asks him why did he leave the reception party. He asks did she know it, he didn’t know it. She asks would he cancel the party if he knew it. He tells that he would have not cancelled it.

Reviewed Rating for Kumkum Bhagya 24th December 2021 Written Update Party twist: 3/5 This rating is solely based on the opinion of the writer. You may post your own take on the show in the comment section below.