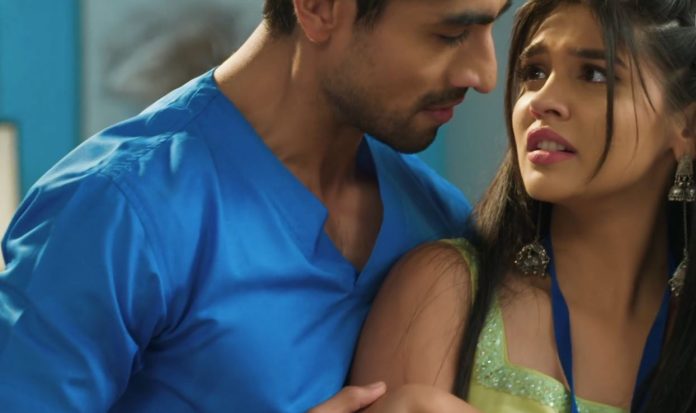 Abhimanyu tells Akshara that she will suffer now and pushes her away. Aarohi comes and gets shocked seeing Akshara in Abhimanyu’s cabin. Abhimanyu asks Aarohi to not think nonsense or rubbish as they were only talking about being normal. He stares at Akshara and says there will be fireworks, if they will be normal in marriage. Aarohi smiles and says it’s cool. She tells Abhimanyu that she was going to tell him about Akshara joining the hospital but he was busy in surgery. She tells Abhimanyu that everything will go fine in hospital, home and work if he and Akshara will behave normal.

Akshara takes a leave asking Abhimanyu and Aarohi if they are busy. Abhimanyu replies to Akshara that he and Aarohi will actually be very busy. He angrily tells Akshara that he will meet her in an hour. Abhimanyu calls Akshara “normal Akshu” and signs her to leave. Akshara leaves with a fake smile and fake confidence. Aarohi feels happy. Both Akshara and Abhimanyu feel emotional and pain of being separated. While walking in the corridor, Aarohi sees Mahima and Anand’s doctor advertisement poster. Aarohi thinks she is the best and that is why marrying the best. She thinks she will prove that she is the best and deserves to get a place on the doctors poster advertisement in Birla hospital.

Mahish asks Kairav what is the logic behind Akshara joining the Birla hospital. Kairav tells Manish that Akshara doesn’t do anything without thinking about it. On the side, Harsh informs Anand and Mahima that a cabinet minister chose their hospital for their Bypass surgery. Anand asks Harshvardhan if he means that he (Anand) will perform the operation. Harshvardhan says this surgery will be good for their hospital’s publicity and pr. Mahima asks Harshvardhan about the date of surgery. Harshvardhan will get tensed and shocked on receiving a message from the minister.

At Goenka Mansion, Akhilesh shows excitement and tension about Aarohi’s wedding venue. Manish asks Akhilesh to calm down as his brother is with him. Whole Goenka family gets together to share the happiness of Aarohi’s marriage. Akshara feels broken from inside. At Birla hospital, Anand asks how they will handle the minister’s operation on the date of Abhimanyu’s marriage. Harshvardhan tells Anand that he requested PMO a lot but the minister wants to get his surgery done on the date of Abhimanyu’s marriage only. Anand says everyone including Goenkas and Abhimanyu will get angry if they postpone the marriage date.

Harshvardhan tells Anand that they can let such a big opportunity go out of their hands. He tries to convince Anand to perform this surgery by telling him that the minister chose him because he is best. Harshvardhan tells Anand saying that it’s good for their hospital’s reputation and revenue. He butters Anand saying that the Minister trusts his ability. Mahima agrees with Harshvardhan. She tells Anand that they won’t get such an opportunity again. Mahima further says that being businessman and their to be additional family, Goenkas will understand them. Anand says that he won’t speak in between if Goenkas gets angry again.

Harshvardhan says he will handle Manish as he has a great idea to handle him. At Goenka Mansion, Aarohi gets surprised on receiving a message. She tells her family that Manjiri, wedding planner and Abhimanyu are coming to their house. Abhimanyu stops Akshara from leaving. He asks Akshara where she is running away? Akshara tells Abhimanyu that she genuinely has some work outside. She further says to Abhimanyu that she wouldn’t have joined the Birla hospital, if she wanted to run away. Abhimanyu says it’s weird that she got some urgent work at the time of his arrival. Akshara says everyone is busy with marriage work. Abhimanyu reminds Akshara it’s his marriage only.

Abhimanyu does let Akshara sit in the car and leave. He asks Akshara if her normal-normal game is finished? Abhimanyu pretends to look normal and asks Akshara if she feels normal. Akshara shows fake happiness and confidence. She starts taking Abhimanyu inside her home. Akshara also saves Abhimanyu from stumbling. Manish tells Manjiri it’s good that she came and brought wedding planner Reem with her. Reem asks Goenkas to make her note their likes and dislikes too for marriage preparations. Vansh stares at Reem from a distance with a bright smile. She starts asking Aarohi about her likes and dislikes saying that she has to plan as per the couple’s likes and dislikes too.

Mahima tells Harshvardhan that they would have broken the marriage if they would have been in Goenkas place. She says according to her Manish will break the alliance. Suhasini asks Birlas if they want the marriage to happen or not? Aarohi gets tense. In the next episode, Goenkas and Birlas will be seen waiting for Abhimanyu, Akshara and Aarohi in a temple. Aarohi will reach the temple in heavy rain. Abhimanyu will be seen indulging in a romantic moment with Akshara while helping her. Aarohi will be shocked to see Abhimanyu and Akshara close to each other.

Reviewed Rating for Yeh Rishta 23rd December 2021 Written Update Hurtful Love: 4/5 This rating is solely based on the opinion of the writer. You may post your own take on the show in the comment section below.