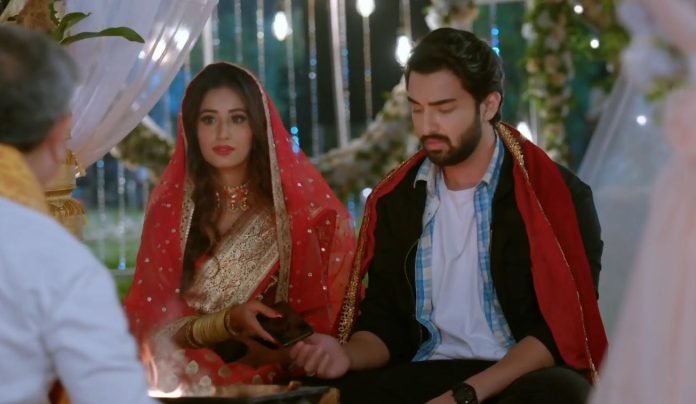 Bhagya Lakshmi 25th December 2021 Written Update Major twist Malishka calls Rishi and reminds him the mahurat. She asks him by when will he be at her place for the wedding. Rishi answers that he is leaving right away. She asks Lakshmi to go home. He gets ready for the marriage and wears the sehra. Pandit meets Neelam and tells her about Rishi’s Markesh dosh returning back to haunt him. He wonders how is this possible when he is already married to Lakshmi, his protector. Neelam grows worried for her son. Lakshmi senses a bad omen when a glass vase breaks by her hands. She grows worried recalling the nightmare. She wonders how did Rishi think of leaving her if she is really important for him. Malishka tells that she will marry Rishi some how.

Neelam, Lakshmi and Virender along with the other family members are shocked to know the danger over Rishi’s life. Neelam asks Pandit to guide them to save Rishi. Pandit tells that it will happen as destined. Neelam tells that Lakshmi will be responsible if anything happens to Rishi. Lakshmi promises Neelam that she will bring Rishi home safely. Rishi meets Malishka and they both get ready to get married. Pandit chants the mantras, while Malishka happily performs the rituals to marry Rishi. They take the wedding rounds, when Lakshmi arrives there and receives a huge shock by Rishi’s deceive. Will the wedding stop? Keep reading.

Earlier in the show, Lakshmi arrives at the office to meet Rishi. Rishi tells that he loves Malishka a lot, he isn’t regretting anything. She tries to remind him that she loves him a lot. He tells that he remembers everything. He tells that he loves Neelam a lot. She tells that Neelam loves her for his sake, she wanted her to wait for one year for him. She feels lucky that she is his mom’s choice. She tells that his mom wants his happiness. She wants him to think of Neelam’s happiness and not feel guilty. She asks him to come on time for the marriage. He confesses love to Malishka. Malishka gets busy in some work and misses to see Lakshmi.

Lakshmi and Malishka don’t see each other at the office. Lakshmi meets Rishi. He ask her how did she come suddenly. She tells that she got lunch for you. He asks why so soon. She tells that she was much worried for him, she wants to be with him, she can’t let anyone snatch him. The wind blows away his important documents. Lakshmi helps him and picks the papers. They land into a moment again. Rishi learns that Malishka is coming in her cabin. He gets worried when Malishka comes inside the cabin and sees Lakshmi. Neelam grows worried and calls the pandit home. She tells Virender that she is worried for Rishi’s life.

Malishka angrily asks Lakshmi why is she doing. Lakshmi tells that she isn’t doing anything secretly. She asks Malishka to sit for a talk. Rishi gets worried seeing Malishka and his pictures playing on the projector screen. He doesn’t want Lakshmi to see anything. He signs Malishka to stop Lakshmi. Lakshmi asks Maliska to explain Rishi. She tells what she is feeling. She shares her strange fear of losing Rishi. She asks Rishi if she isn’t important to him, she is his wife. He tells that she is important. She asks how did he think of leaving her at home. She tells that she got this same negative feeling on the Karwachauth night.

She asks him to have food and take care. She hugs him. Rishi understands her feelings. He finds Lakshmi hurt. He tells her that he will take her to the doctor, she isn’t able to walk. He worries for her. She asks him to do his work. He asks her to just come. He takes her to the doctor and gets her treated. He thinks she is tolerating her pain because of her fear regarding his life. They see each other and smile. Malishka calls him and reminds him the mahurat. He tells that he got Lakshmi to the hospital. She tells that Lakshmi won’t die in such a little pain. He asks her to mind her language, and not say such words for anyone. She asks him to not fight and come soon.

Rishi asks Lakshmi to take care of herself. She tells him that she will be tensed until he comes home. He asks her to rest instead worrying. She smiles seeing his care. Karishma and Dadi learn that Neelam is worried. They go to see Neelam. Lakshmi arrives home. She asks the servant not to tell anyone about her injury. He informs about pandit’s arrival. He tells that the entire family is worried. Lakshmi runs to know the matter. Rishi meets Malishka at her home. She tells that she will wear a saree on her wedding. He tells that Lakshmi wears sarees. She asks him not to take Lakshmi’s name. Lakshmi fears for Rishi’s life.

Reviewed Rating for Bhagya Lakshmi 24th December 2021 Written Update Close call: 3/5 This rating is solely based on the opinion of the writer. You may post your own take on the show in the comment section below.