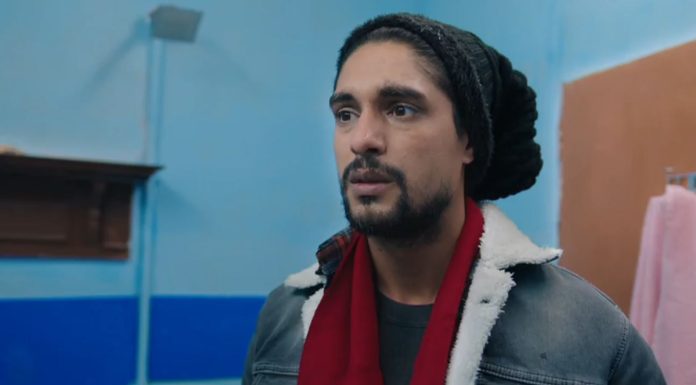 Udaariyaan 25th December 2021 Written Update Fateh spots Jasmin Jasmin tries the same trick to trap Angad, like he traps the clients of lawyer Bhatia. She takes a disguise and meets Angad, and gets her pictures clicked with him. Angad doesn’t identify Jasmin. Later, she meets the photographer who hands over the photos to her, which he clicked at the club. She wants to help Riya’s Nani win the custody case, so that Angad loses Riya and breaks up with Tejo as well. Jasmin can’t see Tejo happy with Angad and Riya. Fateh decides to leave from Tejo’s life. He thinks to go to some other city.

He goes to the bus stand to board the bus, and just then he hears Jasmin yelling at the photographer. He turns to see her and finds Jasmin talking to the guy. He wonders what is Jasmin doing in Rampur. He grows worried that she is after Tejo’s happiness. Fateh stays back to find out Jasmin’s activity and protect Tejo. Will Fateh be able to save Tejo and Angad’s happy world from evil Jasmin? Will his truth come out in front of Tejo? Keep reading.

Earlier in the show, Tejo confesses love to Fateh. Fateh tells that he just loves Tejo, he is really happy to get her back. They both express happiness and hug, while Angad watches them. This happens to be Angad’s dreams. He lies to Tejo and doesn’t tell about Fateh. He feels guilty and doesn’t think if Tejo wants him to sacrifice his love. He thinks if he is a bad person to hide someone’s truth and separate the lovers. Angad gets into a dilemma, just like Fateh who also thinks to leave far away for the sake of Tejo’s happiness. He wishes Tejo stays happy with Angad.

Angad shares some drinks with Sharma, and expresses his tension. He tells that he wants to marry Tejo soon, but he didn’t profess love to her till now. Sharma asks him to tell Tejo his feelings before it gets too late. He tells Angad about his first wife, his first love. Angad thinks of Tejo and realizes that he just loves her. Angad thanks Sharma for the advice. He tells that he will tell Tejo that he loves her and proposes her. He comes across Jasmin, who acts drunk and falls over him, just to get the pictures clicked by her aide.

She wants to use the pictures to ruin Tejo and Angad’s relations. She goes to meet the guy to get the pictures. She tells that Tejo will have her esteem and leave from Angad’s life when she learns that he isn’t a good man. She wants to malign Angad’s character. Fateh goes to the bus station. He is at the same place as Jasmin, and gets to spot her. He hides from her and finds her paying money to someone. He wants to know the matter. He secretly follows Jasmin’s car and thinks he will find out her motives.

He knows that she hates Tejo and will really some step against Tejo. He doesn’t want Jasmin to succeed in her evil motives. Tejo tries to find out about Jasmin and reaches the hotel again. She learns that Jasmin has checked out. She doesn’t know who is she and why is she troubling Angad. She thinks to find out the truth. She returns home and spends time with Riya. She misses her family a lot. Angad comes home and is glad to see Tejo happy with Riya. He teases Tejo in a funny way. He tells her that she is in their lives for a reason, Riya had to meet her. He thanks her for keeping Riya happy. He wants to profess his feelings, while Tejo decides to tell him about the suspicious girl who has joined hands with Riya’s Nani. Will Fateh fail Jasmin’s plans? Keep reading.

Reviewed Rating for Udaariyaan 25th December 2021 Written Update Fateh spots Jasmin: 5/5 This rating is solely based on the opinion of the writer. You may post your own take on the show in the comment section below.