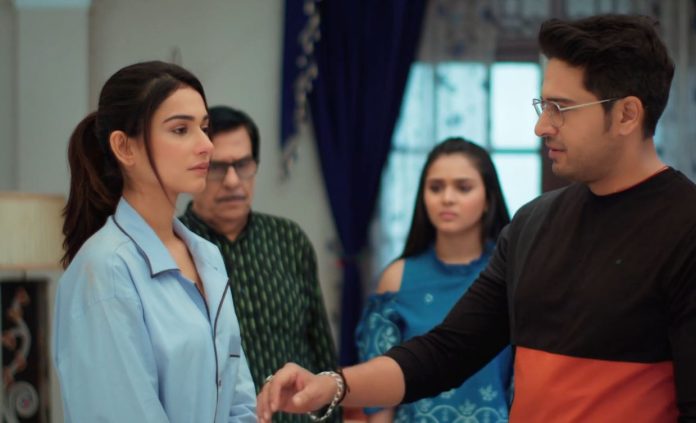 Anupama 25th December 2021 Written Update New drama Anuj learns about Malvika. He gets angry on the man who calls her mad. Anupama calms down Anuj. GK wishes for Anuj and Malvika’s peace. He thinks to share his problem with Hasmukh. Malvika asks Vanraj to tell her if she can stay in his house. Kavya suggests that she stays in some hotel. Malvika understnds her point and agrees to leave. Vanraj stops Malvika and asks her to stay in Shah house. Malvika thanks him happily. She tells that they shall talk about business, because the investors are calling her often. Anupama tells Anuj that this route goes towards the Shah house. Anuj and Anupama think if Malvika went to Shah house.

Kavya asks Vanraj why did he stop Malvika, Anuj will take her home. Vanraj tells that Malvika is emotionally disturbed, once she gets her anger calmed, then she will go. He reminds that Anupama had watched Kavya the same way before. Kavya asks will he always get a girl home when he has a wife. Kavya shouts and creates a scene. Malvika tells that she hates fights, she will go if they want. Vanraj asks her not to go anywhere, and stay back. Malvika tells that Vanraj loved Kavya, so he gave divorce to Anupama, marriage is nonsense and can’t bound two people. She tells that they shall have affair and move on, Vanraj can fall in love with some girl again. She likes his family. Kavya shouts on Malvika.

Vanraj calls it enough. Kavya asks Malvika to go to Anuj or anywhere else. Malvika asks Vanraj what shall she do now now. Kavya asks her to get out of her house. Anuj and Anupama come home and find Kavya shouting on Malvika. Anuj stops Kavya from shouting on his sister. He tries to calm down Malvika’s anger. He asks her not to go away from her. He tries to take her home, but she refuses to go with him. She is still upset. Anupama explains Malvika about the importance of own family and own house. Malvika tells that Anuj’s house isn’t of her now. Anuj is hurt by Malvika’s words.

Kavya objects to Malvika. Malvika asks Vanraj to explain Kavya, she is just Vanraj’s friend. Anupama permits Malvika to stay in the house if she wants. Malvika thanks Anupama for supporting her. Kavya asks them to have fun but outside her house. She criticizes Malvika and angers Anuj. She tells that Anupama has no right to decide here. Vanraj asks Kavya to shut up. Malvika tells Anupama that she wasn’t upset with her, but Anuj. Anupama asks her to never get upset with Anuj. She explains that Anuj is his sister’s first friend. Malvika tells that Anuj is so stupid. She knows Anuj loves her a lot.

Mama also gets emotional on hearing Anupama’s speech on siblings. Anuj asks Malvika not to trouble anyone in Shah house. Malvika asks Shahs to kick her out if she troubles anyone. She tells that she will have her meeting with Vanraj now. Anuj wishes them all the best. Malvika asks him to leave. Anupama apologizes to Anuj that she decided on his behalf, Malvika is kiddish and stubborn, that’s why she supported her. Anuj tells that he believes in her decisions. They reach the tea stall and sit to have tea.

Anupama defends her decision to pacify him. He is worried that Kavya will not let Malvika stay happy. She tells that the other family members will keep Malvika happy. He knows that Shahs are a good family. She understands what’s bothering him. She asks him to have tea. She questions him about Malvika’s annoyance. In the next episode, Malvika plays a game with the Shah family. Anuj tells Anupama that Malvika chose Vanraj for guidance. Malvika loses to Vanraj in the game. Stay tuned.

Reviewed Rating for Anupama 25th December 2021 Written Update New drama: 5/5 This rating is solely based on the opinion of the writer. You may post your own take on the show in the comment section below.