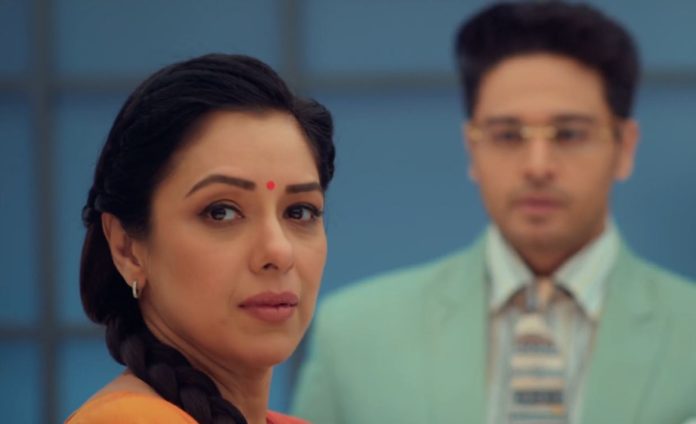 Anupama 28th December 2021 Written Update Wedding Proposal Anuj tells Anupama that he doesn’t mean that he doubts Vanraj’s talents. Anupama interrupts Anuj and tells him that he is still not speaking his mind out. Anuj tells Anupama that even he can’t understand what is going on in his mind. He says he doesn’t find Vanraj and Malvika’s partnership good. Anupama tells Anuj that being Malvika’s elder brother, it’s his duty to be worried about her. She also says to Anuj that Vanraj’s focus and concentration right now is only on his work. With a little difficulty, Anupama tries to explain to Anuj that Vanraj may be wrong but he is not bad.

Anupama continues explaining to Anuj that Vanraj has arrogance, anger, rudeness and stubbornness but women are not his weakness. She tries to make Anuj feel relaxed about Vanraj’s intentions towards Malvika. Anupama further explains to Anuj that Malvika may be childish but is not a child as she has seen and met many people while traveling all over the world. She asks Anuj to trust his sister that she will handle her business and business partner well. Anuj tells Anupama that he agrees to her each and every word. He says that still his mind is not agreeing to Malvika and Vanraj’s partnership and he is having a strange feeling.

Anupama feels shocked with Anuj’s behavior. At Shah house, Kavya questions Vanraj, why he is holding a Christmas party when he never held any in the past. Vanraj tells Kavya that time changes everything. Kavya tells Vanraj that relationships don’t change with time. She warns Vanraj to remember that Malvika is Anuj’s sister. Kavya says to Vanraj that he understands Indian brothers better than her. Indian brothers become sisters’ bodyguards whenever they feel something off. She further tells Vanraj that every Indian brother has an elder brother syndrome which makes them over sensitive and over protective.

Kavya warns Vanraj to just concentrate on business and nothing else. She continues warning Vanraj that he would be in trouble, if he even by mistake hurt Malvika. Vanraj interrupts Kavya and tells her that she will further fall in his eyes if she continues her nonsense. He tells Kavya that it’s a pity that she never understood him. Vanraj explains to Kavya that he is/was not/never a womanizer. He further explains to Kavya that he loved and eyed her only, not anyone else. He leaves telling Kavya that he doesn’t have time for her even now, then how will he have time to get involved with someone else.

Kavya thinks Vanraj may do anything but Anuj’s protectiveness towards Malvika will come out some day. At Anuj’s office, Anupama gives water to him. She asks him to listen to her calmly. Anupama tells Anuj that being an elder sister to Bhavesh, she always feared that her brother would fall while trying to walk in his childhood. She explains to Anuj that he is feeling something similar. Anupama explains that Malvika is capable enough to take care of herself and make her decisions too. She tells Anuj that Malvika doesn’t need to hold either his or Vanraj’s hand. She reminds Anuj that he only told her that she is the hero as well as heroine of her story.

Anupama tells Anuj that he needs to tell Malvika the same thing. She requests Anuj to let Malvika live her story. Anupama makes Anuj smile by funnily telling him that he can protect/help Malvika whenever she asks him for it. She asks Anuj to chill. Anupama explains to Anuj that if stopping a woman from growing is wrong then to weaken a woman by supporting her is wrong too. She tells Anuj that there are very few people in the world like him who treat women equal to men. Anupama tells Anuj that because of all this she respects lot and loves him. She stops in between and Anuj looks at her shocked and surprised. Anupama changes her words and tells Anuj that she is impressed by him.

Anuj tells Anupama that she is lying as her cheeks have got pink. He looks at Anupama and asks her to say whatever she wants to.They get interupted by Malvika’s scream saying, “what the hell”. At Shah house, Kavya shares her fear of Malvika and Vanraj’s partnership with Baa. Baa asks Kavya to trust Vanraj and doesn’t keep an eye on him. She asks Kavya what can happen between Vanraj and Malvika in Anuj’s office. Then Baa realizes that even Kavya and Vanraj’s affair started in the office. Kavya gets more scared.

At Anuj’s office, an upset Malvika tells Anuj that the owner is not ready to sell his/her property for her restaurant. Anuj asks Malvika to buy some other place. Malvika tells Anuj that she wants the property she finalized as its perfect for the restaurant. Anuj asks Malvika to chill, saying that he will buy it. Malvika says to Anuj that Vanraj will handle it. Vanraj comes from behind saying he will handle it off course. Anupama tries to lighten up the matter. Anuj gets shocked when Malvika informs him that she transferred 50 lakhs rupees to project/company accounts as Vanraj has started working on it. Malvika questions Anuj’s tone and reaction.

She doesn’t let Anuj explain and say anything to anyone. Anuj tells Malvika that she can even give 50 crores to anyone as his everything is hers only. Malvika asks Anuj if he is worried about whom she gave 50 lakh rupees. Anuj stutters. Malvika tells Anuj that she knows that he has a problem with Vanraj and asks Why. Vanraj asks the same question. Anupama explains to Malvika that Anu does doubt her talents. She further explains to Malvika that in India every brother feels protective towards his sister and interrupts sister’s decisions. Malvika tells Anupama that she is right. She asks Anuj to speak out his mind on her face from next time. Vanraj agrees to Malvika’s words and asks Anuj to let’s keep things fine with each other.

At Shah house, Shahs feel excited about the Christmas party to be held at their house. Mamaji jokes. Pakhi says that she feels thankful towards Malvika for the Christmas party she is helding in their house. Baa comes and asks why Malvika wants to celebrate at their house. Other family members explain to Baa to calm down. At Anuj’s office, Anupama in a fun tone challenges Malvika and says that her and Anuj’s restaurant will be better. Anuj agrees to Anupama’s words. Malvika calls Anuj “Anupama Ka Chamcha” and teases him. Vanraj in a shayari tone says Anuj and Anupama got scared of Vanika, which is better.

Malvika praises Vanraj’s shayari and tells Anuj that it’s better than his shayaris. Anuj jokes. Malvika, Vanraj, Anuj and Anupama teases each other in a joking way. Malvika calls Vanraj an idiot for divorcing a perfect woman like Anupama. Malvika’s words shock Vanraj, Anupama and Anuj. Anuj informs that he has made her cabin ready. Vanraj and Malvika leave. Anupama scolds Anuj and asks him to talk carefully in front of Malvika and trust her if not Vanraj. She warns Anuj that with his over protective behavior, he can lose Malvika once again. Anuj says he will not let Malvika leave this time. Anupama asks Anuj to take a chill pill. In the next episode, Anupama will be seen sharing her feelings for Anuj with Vanraj. Malvika will ask Anuj why he hadn’t proposed to Anupama for marriage till now.

Reviewed Rating for Anupama 28th December 2021 Written Update Wedding Proposal: 5/5 This rating is solely based on the opinion of the writer. You may post your own take on the show in the comment section below.