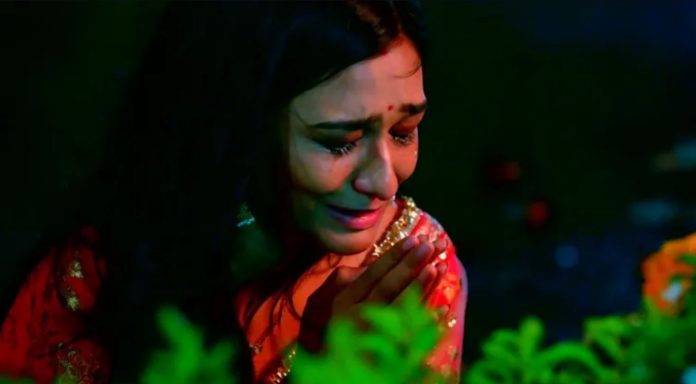 Bhagya Lakshmi 29th December 2021 Written Update Wedding shock Lakshmi prays to Matarani for Rishi. She wants her Rishi back. The lady who guides Lakshmi to get help from Matarani. She finds Lakshmi’s foot hurt and bleeding. She tells that Lakshmi is a real Suhaagan, who madly loves her husband. She also prays for Lakshmi. She tells that Lakshmi forgot her own pain, her own wound in worry for her husband. Lakshmi pushes herself against her limits and reaches Malishka’s house with difficulty. Malishka and Rishi take the wedding rounds. Malishka doesn’t want the marriage to stop at any cost. Rishi is still lost.

It starts raining. The rains occur and try to blow off the havan kund fire. Pandit tells that the marriage can’t happen now, because of the rains. Malishka doesn’t listen to the pandit and asks Rishi to just take the rounds with her. She holds Rishi’s hand and goes ahead. She tells that the rounds will happen. Lakshmi reaches there and is shocked to see Rishi and Malishka marrying in the mandap. She shouts Rishi in shock. Will Lakshmi learn the big truth, or save her marriage somehow? Keep reading.

Earlier in the show, Rishi worries that his Kundali Bhagya will be connected to Malishka after this marriage. Lakshmi doesn’t find any help. She cries helplessly. She continues to walk barefoot. She hears a lady telling that the storm is Matarani’s anger when something wrong is happening around. She adds that Matarani will either stop the wrong happening or not spare the wrongdoers.

She sees Lakshmi and questions her. Lakshmi tells the lady that she is looking for her husband. The lady asks her to make a new way as shown by Matarani. She tells Lakshmi that everything will change soon, she is a protector of her husband. Lakshmi doesn’t understand the lady’s words. The lady asks Lakshmi to go to the temple and pray, then her wishes will get fulfilled. Lakshmi prays to Matarani.

Lakshmi prays to Matarani for protecting Rishi. She shares her fears with Matarani. The lady watches her and blesses her. She asks Lakshmi to go the other side to reach her husband. She tells that she will get her husband on the route shown by Matarani. Lakshmi thanks her. The lady also prays for Lakshmi, who forgot her wounds for reaching her husband. She also wishes that Lakshmi unites with her husband. Malishka insists Rishi to come ahead for the rounds. Lakshmi runs on the roads.

Malishka ties the gathbandhan. Lakshmi reaches Malishka’s house. She shouts Rishi. She finds the main door locked. She looks for some backside way. The rains hinder the marriage. Malishka asks Rishi to just rush and take the rounds. The fire is put off by the rains. Pandit tells that its a big bad omen and now the marriage can’t solemnize. Lakshmi reaches the mandap area. Virender wants to go out and search for Lakshmi. Dadi and Karishma stop him. He tells that Lakshmi would have gone by walk, she is alone. Dadi asks him to look at his state, he won’t go anywhere.

Dadi rebukes Karishma for speaking against Lakshmi. Sonia also supports Karishma. She gets scolded by Dadi. Virender asks Sonia to shut up and not say anything against Lakshmi. Neelam gets Rishi’s call. She asks him is he safe. He tells that he is safe and fine. He apologizes for not answering her calls. He tells that he is at Malishka’s house. Neelam asks him what is he doing there. He disconnects the call. Malishka gets angry on the pandit, when he tells that their marriage isn’t destined. She asks pandit to go to the guest room. She tells Rishi that they shall be positive, they will restart their marriage properly. She asks him not to feel bad. Lakshmi removes the glass pieces that pierced in her foot.

Malishka asks him to go out and get the mangalsutra. He goes to get the mangalsutra. Lakshmi tries to find some way to get inside. Rishi gets hurt when the mandap pillars fall over him. Lakshmi hears his scream and shouts. Neelam is relieved that Rishi is safe. Virender tells that she is relieved about her son and doesn’t care for Lakshmi. Lakshmi runs to save Rishi. Rishi faints down. He doesn’t see Lakshmi there. Lakshmi shouts Malishka for help. Malishka is shocked to see her. She sees Rishi injured. She runs to save Rishi. The decoration structures fall down and ignite the fire. Malishka stops away seeing the fire around Rishi, while an injured Lakshmi bravely saves him from the fire and debris.

Reviewed Rating for Bhagya Lakshmi 29th December 2021 Written Update Wedding shock: 2/5 This rating is solely based on the opinion of the writer. You may post your own take on the show in the comment section below.