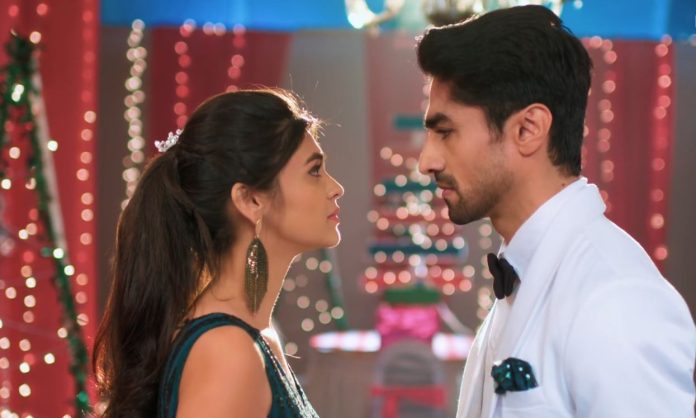 Yeh Rishta 28th December 2021 Written Update Akshu missing Akshara leaves from the dance floor to drink water. Abhimanyu too leaves and reaches near Akshara. Both of them feel each other and turn towards each other. Both of them feel emotional and Akshara leaves. While leaving, Akshara saves herself from falling and by mistake pushes the Christmas tree. With the push, the Christmas tree moves and a secret photograph which can expose Aarohi’s lie falls. Akshara leaves and Abhimanyu comes there. A kid asks Abhimanyu to help him tie his laces. Abhimanyu ties the kid’s lace and sends him away.

The man sees angry Abhimanyu behind Akshara and refuses to attend Akshara’s music therapy session. Unaware Akshara says to the man that he was himself telling her that his internship is getting stressful and he needs mental peace. The man being scared of Abhimanyu explains to Akshara that with sleep he gets fresh. Akshara asks him to come and hear music if he likes it. The man leaves saying he hates music and it’s a waste of time. Akshsara thinks why this man ran away like he saw a ghost. She thinks she thought to help him as he tried to help her. Akshara thinks to leave it as the man himself doesn’t want her help.

Abhimanyu keeps listening to Akshara’s self-talk. Akshara turns and sees Abhimanyu. She asks Abhimanyu what his problem is and why he always scares that man? Abhimanyu asks Akshara, doesn’t she know what his problem is? Akshara requests Abhimanyu to not do this. Abhimanyu asks Akshara what should he do? He says he is trying but it is not happening. Akshara reminds Abhimanyu that they decided that they will remain normal. Abhimanyu says they didn’t take a doctor’s oath which he can’t break. Vansh gives Reem a gift. Reema asks what’s in it? Vansh tells her that he took everybody’s gift together so he doesn’t know what’s inside her gift.

Reem opens the gift and finds a beautiful angel statue in it. Vansh praises the gift and says an angel for an angel. He stutters and Reem thanks him for the lovely gift. Reem leaves and Vansh feels relaxed. Kairav comes there and teases him. On the other hand, Harshvardhan asks worried Aarohi if she found the secret photograph? He calls Aarohi a big fool even being a doctor. Harshvardhan tells Aarohi that she should have torn and thrown the secret photograph in the hospital dustbins as nobody checks it. He asks Aarohi to find the secret photograph as proof of her lie. He tells her that he won’t be able to help her if someone finds it.

Neil gives Akshara a strawberry cake hamper reminding her that she likes it. Akshara thanks him. Next Neil gives bitter chocolates to Aarohi but the latter doesn’t reply to him. Neil wonders why today Aarohi is not giving him rude replies? Manish says his family should leave now. Manjiri asks Goenkas not to keep any anger in their heart and requests them to forget everything for children’s happiness. Manish asks the Birlas to try not to commit the same mistake. Anand says they will discuss the dates together now and finalize what Goenka’s find right. Before leaving Manish reveals that he got to know about their lie through the Minister not Akshara.

Birlas feel awkward. Harshvardhan apologizes to Akshara and the latter accepts it. Manjiri tells Swarna to let children decide the ring for engagement the day after tomorrow. Swarna agrees to Manjiri. Aarohi feels irritated at not finding the secret photograph. Goenkas leave for their home. Next morning, a tense Aarohi wonders where the secret photograph is? She thinks she should have destroyed the secret photograph. Aarohi lies to Akshara that she is just excited. She doesn’t realize that she hurt Akshara with her words. Aarohi tries to convince Akshara to come and help her with ring selection. Akshara refuses to go to Birla house with Aarohi, saying something bad always happens and she gets blamed for it.

At Birla house, Manjiri asks Abhimanyu if there are no other doctors in his hospital who can perform surgeries in his place? She caresses his hair and asks him to take care of himself too. Manjiri asks him to get ready and come downstairs. She sees Abhimanyu’s day before’s clothes and places the crushed photograph on his side table. Neil and Parth help Manjiri in cleaning wedding jewelry. Manjiri asks Neil and Parth’s help in changing Abhimanyu’s room organization to make it look like a couple’s room. Parth says husbands should adjust a little for their wives. Shefali overhears it feels good.

Manjiri leaves to talk to Mahima. Akshara reaches Birla hospital with Aarohi. She recalls her Christmas dream romance with Abhimanyu. She questions lost Aarohi if she is fine. Aarohi leaves telling Akshara that it’s just work stress. The same man from the party gets scared again and runs away from Akshara seeing Abhimanyu behind her. Akshara thinks the man ran away from her again due to Abhimanyu’s fear. She self talks and calls Abhimanyu “sadu, akdu and chidku”. Abhimanyu comes there and asks her to say something more. Their conversation gets interrupted with a ward boy’s voice. Ward boy says this woman fell from the temple stairs. Abhimanyu goes with them.

Akshara gathers the courage and starts singing, “Kabhi Yaadon Mein Aaun, Kabhi Khwabon Mein Aaun”. While singing she recalls Sirat’s death. Abhimanyu treats the patient and sees Akshara. Akshara tries giving courage to the patient. In the next episode, Abhimanyu will overhear Aarohi informing her brother that Akshara is missing. Worried Abhimanyu will leave to search for Akshara. He will reach near Shiv ji’s statue and will pray to find Akshara before something bad happens to her. He will turn around hearing Akshara scream, calling him and get worried.

Reviewed Rating for Yeh Rishta 28th December 2021 Written Update Akshu missing: 4/5 This rating is solely based on the opinion of the writer. You may post your own take on the show in the comment section below.