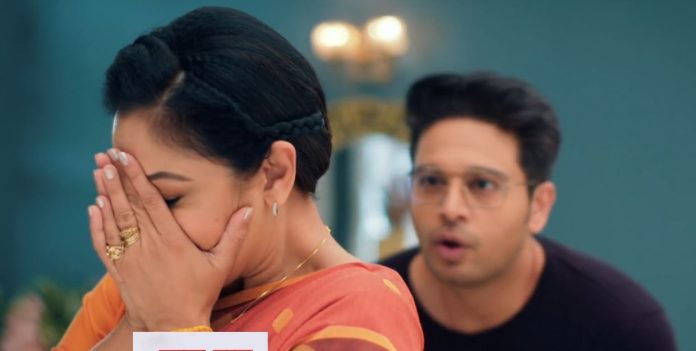 Vanraj asks Anupama that whatever she said about the challenge was just to calm Malvika or will she really compete. Anupama replies that both things are correct. In a joking way, Vanraj asks Anupama if she will really compete? Anupama replies, “obviously there will be competition, as they are working on similar projects”. Vanraj smiles and drinks his coffee. He discusses with Anupama that they were away even being together and now are near each other but away. They recall their past and realize how different they were from the present. Anupama tells Vanraj that she was really very different from present.

She tells Vanraj that he is still almost like he was in the past. Vanraj disagrees and says he had a little more attitude as compared to the present. Anupama asks him if he doesn’t have an attitude now? Vanraj smiles and says he has, had attitude and will always have attitude. Both of them laugh together. Anupama says Lord Krishna writes real life screenplays such that no one can predict what is going to happen next, not even filmmakers. She stops herself from sharing her feelings about Anuj to Vanraj. Vanraj teases her. Anupama says first Anuj came into her life and then Malvika. Vanraj smiles and tells Anupama that he used to feel jealous of Anuj at some time.

Anupama again stops herself from blurting out her feelings for Anuj to Vanraj. Vanraj laughs at Anupama’s behavior. Anuj regrets questioning Malvika about transferring and using a big amount by trusting Vanraj. He thinks why he did that as he has no problem with Malvika but with Vanraj. Anuj thinks he will give the best Christmas gift to Malvika that she wouldn’t even have thought about. Vanraj says to Anupama that he sometimes feels that they were college friends who faced difficulty in tolerating each other, but meeting after a long time thinks that they were not that bad. Anupama laughs.

Vanraj says to Anupama that this is why he asks her to confess her feelings to Anuj instead of worrying about him and Kavya. Anupama says that sometimes she feels proud of herself for how much she grew up from her past life. She says that she reached this stage of her life after a lot of struggles and with God’s grace. Vanraj tells Anupama that she has come a long way and he was always there either to stop her or encourage her to move on. Anupama asks Vanraj to not take the credit of encouraging her as he only once asked her to confess her feelings to Anuj. Both of them laugh together again. Vanraj discusses with Anupama that their relationship is unique.

Anupama replies, It’s their relationship whatever it is. She says it is Lord Krishna’s grace that their relationship continuously changed but stayed till now. Vanraj says they are laughing at their mistakes now. He further says, life gives this chance to very few people. Anupama says very few people take this chance. She continues explaining that many people continue staying enemies instead of forgiving each other. Vanraj says he knows that Anuj has a problem with him working with Malvika. He tells Anupama that he has no evil intentions as now he is just focused on his work. Anupama tells Vanraj that she told Anuj that he is not this kind of evil person and just wants to concentrate on work now.

Vanraj thanks Anupama. He asks Anupama if she is praising him or criticizing. Vanraj further asks her what is there to criticize about him? Anupama starts telling Vanraj that he has pride, stubbornness and he thinks no one is better than him. Vanraj asks Anupama to stop as he understood. Anupama tells Vanraj that Anuj has a problem with him. She requests Vanraj to not give any chance to Anuj to complain. Vanraj asks Anupama to not worry. A staff member tells Anupama and Vanraj that Anuj and Malvika are calling them respectively. Before leaving, Anupama and Vanraj challenge each other. They turn and smile at each other.

“Shikayat Mitane Lagi” plays in the background. Vanraj looks at his name plate with a smile and hope, recalling the bad past. Anupama sits with Anuj to work. Vanraj enters his cabin and feels hopeful towards the future. Anupama and Anuj are seen working together. Vanraj and Malvika too discuss their work together. Anuj and Anupama steal glances at each other. Outside the office, Malvika invites Anupama to her Christmas party. Anupama tells Malvika that she never attended any Christmas party. This shocks and surprises Malvika. Malvika shares her first Christmas party experience with Anupama.

She stops talking about the party. Malvika gets emotional remembering her parents. Anupama feels bad for Malvika. Malvika again invites Anupama for Christmas, kept at Shah house. Anupama asks Malvika if she is happy staying at Shah house? Malvika says she is very happy till now but doesn’t know what will happen in future. She tells Anupama that there is something special about Shah house that she (Anupama) visits Shah house even after divorce. Malvika tells she is happy to know that she (Anupama) is still connected to her family. Malvika falls on the ground and Anupama helps her.

Anuj comes and ties Malvika’s laces. She asks Anupama to bake and bring carrot cake to the party. Malvika leaves on Nandini’s cycle asking Anuj and Anupama that why didn’t they propose to each other for marriage till now? Both Anuj and Anupama get awkward. At shah house, Mamaji and Bapuji fight to become Santa claus. Family asks both Mamaji and Bapuji to become Santa. Everyone laughs seeing Malvika troubling Baa in a fun way. Malvika requests Baa to decorate the Christmas tree with the whole family. Baa gets convinced and hangs decorations on the Christmas tree.

On the other hand, Anupama thinks to bake the best and tastiest carrot cake. She feels shy recalling Malvika asking her and Anuj, why didn’t they propose to each other till now. Bapuji explains that they should celebrate each and every festival with happiness. Malvika praises Bapuji’s thinking. Whole Shah family decorates the Christmas tree together. Kavya interrupts Malvika from putting the star on the top of the Christmas tree. On the other hand, Anuj pretends to get hurt/injured while helping Anupama in baking the cake. He laughs out loud while telling that he was joking. Worried, Anupama suddenly starts crying.

Anuj sees this and apologizes to Anupama holding ears. He wipes Anupama’s tears and they feel some connection. In the next episode, Anuj will ask Anupama if she has fallen for him. Anupama will turn away with shyness. At the Christmas party, Malvika will go on her knees and request Bapuji to get Anuj and Anupama married. This will surprise and shock people present at the party.

Reviewed Rating for Bhagya Lakshmi 28th December 2021 Written Update Lakshmi shatters: 2/5 This rating is solely based on the opinion of the writer. You may post your own take on the show in the comment section below.