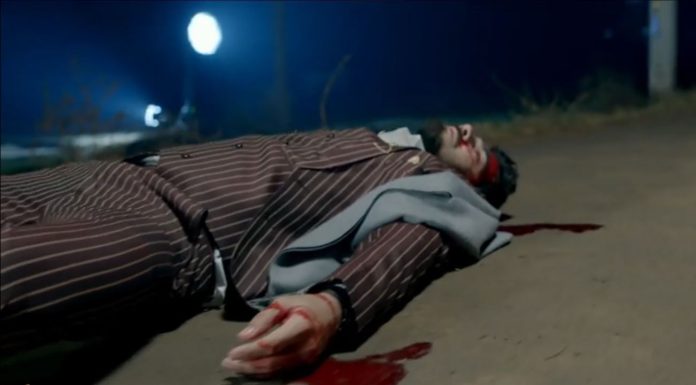 Udaariyaan 29th December 2021 Written Update Angad in peril Angad doesn’t want Tejo to go to her parents’ house fearing that the truth of Tejo’s fake engagement will come out, then the families will also learn about Fateh’s fake marriage. He thinks the families will really try to get Tejo and Fateh united and complete their love story. He doesn’t want this to happen. He tries to stop Tejo back with the help of Riya. Tejo is in two minds, when she can’t leave Riya alone and go. Angad tells Tejo that he has to go for some important work.

Angad thinks Riya’s Nani has done wrong with him by planting that fake pictures to ruin Tejo and his relationship. He wants to confront Nani for her bad act. He also doesn’t realize Jasmin in the pictures. He tells that he will be back soon. Angad meets a deadly accident when a car runs over him. He lies on road in a severely injured state. Tejo gets informed about Angad’s accident. She is shell shocked and rushes to attend Angad. On the other hand, Fateh teaches a lesson to Jasmin. He gets her trapped in her own plans, when she had come to please him with the drama.

He gets Jasmin arrested. Jasmin asks the police to let her free, but in vain. Inspector asks constables to keep an eye on Jasmin, because she is really clever. Furthermore, Fateh gets to meet Riya’s Nani, who reveals a big truth of Angad’s past in front of Fateh. She calls Angad a murderer. She tells Fateh that Angad has killed his brother and Bhabhi. Fateh is left shocked. Will Fateh believe Riya’s Nani and rush to protect Tejo from Angad? Will Fateh return in Tejo’s life to protect her? Keep reading.

Fateh gets pictures clicked with Jasmin. He traps her and the photographer. He calls the police there and gets Jasmin and her aide arrested. He tells that Jasmin always traps the rich men and assassinate their characters by getting the wrong pictures clicked with them. He asks Jasmin to just go away with the police. He tells that he will not let her spoil more lives. He wants her to serve the punishment for her sins. He makes Jasmin away from Tejo’s life. He wishes that Tejo and Angad stay happy now, away from the evil shadow of Jasmin. He is relieved that he has solved this big mess.

Fateh meets Riya’s Nani to tell her Jasmin’s truth. He asks her not to do wrong with Angad, who really loves Riya. Nani alerts him about Angad who is really mad, he doesn’t let his loved ones go away, he can do anything for those he loves. Angad is afraid that he will lose Tejo. He comes in front of the car deliberately to get hit. He doesn’t want Tejo to leave from his life. He goes to the extent of harming his own life for her sake. Tejo gets informed about Angad’s accident. She rushes to the hospital to see him. Angad blackmails her emotionally to not let her go to Moga. Tejo’s family is waiting for her at home.

Tejo sees Angad’s injured state. She meets him, after he gets treated. He shares his worry about Riya. He acts to let her go free to meet her family. She tells him that she will not go anywhere leaving him. He knows that she cares for him, but tells that he loves her. She informs the family that she isn’t coming home, because Angad met an accident and she has to stay back to look after him. Jasmin calls Nani to get her help. She asks Nani to bail her out. Nani refuses to help her. Jasmin gets frustrated. Fateh thinks of Nani’s words against Angad. He doesn’t know what’s the truth and gets restless for Tejo.

Reviewed Rating for Udaariyaan 29th December 2021 Written Update Angad in peril: 3/5 This rating is solely based on the opinion of the writer. You may post your own take on the show in the comment section below.