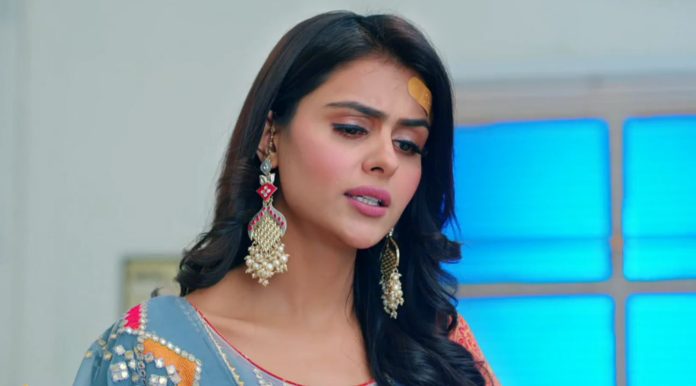 Udaariyaan 30th December 2021 Written Update Planned entry Angad knows that Tejo cares for him. He just wants Tejo to forget Fateh. He thinks he can win her love. He is ready to do anything to get Tejo. Jasmin feels frustrated in the lockup. Fateh wanted her to change her evil intentions and reform. She doesn’t deter from her evilness. She is still revengeful against Tejo and Fateh. Tejo takes Riya to the fair to keep Angad’s promise. Fateh’s wallet falls down. Tejo spots it and goes to call him out. She tells that he dropped his wallet there. Fateh stops on her call. He meets Tejo by his plan, just to make her move on in life. He also wants to find out Angad’s truth by being around Tejo.

He gets Jasmin bailed out and accepts Jasmin’s offer, when she suggested that they will act happily married in front of Tejo to help her move on. Tejo is shell shocked to see Fateh in Rampur. She meets Fateh, and gets to see Jasmin with him. Jasmin asks Tejo what is she doing here. She asks Tejo to spare her husband. She tells that Fateh is her husband. She adds that they have come back to the village after their romantic holiday in Canada. She shows the bangles she bought. She asks Tejo to not appear everywhere. Angad watches Fateh and Jasmin’s new drama. Keep reading.

Earlier in the show, Tejo sees Angad’s injured state. She meets him, after he gets treated. He shares his worry about Riya. He acts to let her go free to meet her family. She tells him that she will not go anywhere leaving him. He knows that she cares for him, but tells that he loves her. She informs the family that she isn’t coming home, because Angad met an accident and she has to stay back to look after him. Jasmin calls Nani to get her help. She asks Nani to bail her out. Nani refuses to help her. Jasmin gets frustrated. Fateh thinks of Nani’s words against Angad. He doesn’t know what’s the truth and gets restless for Tejo.

Fateh stays worried for Tejo. He keeps an eye on her at Angad’s house. He tells that he has to find out the truth about Angad, and until then he has to become Tejo’s shadow. Tejo informs Angad that she is taking Riya to the fair. Angad is happy that Tejo stayed back. Tejo and Riya enjoy in the fair, while Fateh follows them. Fateh is happy to see Tejo smiling and happy. He just wants Tejo to live in peace. Tejo gets Fateh’s wallet by chance. She goes to return the wallet to him. Fateh gets tensed that Tejo will be following him now to give the wallet back.

Tejo stops Fateh to return the wallet. Fateh gets really tensed when he hears her voice. She asks him to take his wallet, she has to go with Riya. Fateh tensely turns towards Tejo. Tejo can’t believe her eyes, that Fateh is in front of her eyes. They have an emotional moment. The time stops for them, while they go lost in each other’s eyes. Tejo and Fateh take a step towards each other. An emotional song plays in the background. They just want to keep seeing each other. They both have an emotional bonding, that reflects by their eyes.

Angad calls Riya and asks for Tejo. He gets to see Tejo with Fateh. He is left shocked, since he didn’t expect Fateh to come in front of Tejo. He rushes out of the hospital to go to the fair and stop Fateh. Jasmin appears in front of Tejo and Fateh. She recalls that she had taken the help from her lawyer to get out of the jail. She acts happily married to Fateh. She tells Tejo that Fateh is her husband, Tejo should be away from him. Jasmin pretends that Fateh and she came back from Canada to pick their important documents, then head back for his new job.

She tells Tejo that they didn’t visit their families, who never love or respect them. She tells that she is very happy with Fateh, she just wants to be with him all the time. She tries making Tejo jealous by the romantic talks. Angad reaches the fair and finds Fateh and Jasmin’s new drama going on. He wonders what’s happening when Fateh didn’t marry Jasmin. Tejo returns the wallet to him. Fateh wants to take Jasmin away from Tejo. Tejo cries seeing him leave with Jasmin. Angad is relieved that Fateh didn’t tell anything to Tejo. Angad will be showing his real side of a psycho lover soon. Keep reading.

Reviewed Rating for Udaariyaan 30th December 2021 Written Update Planned entry: 3/5 This rating is solely based on the opinion of the writer. You may post your own take on the show in the comment section below.