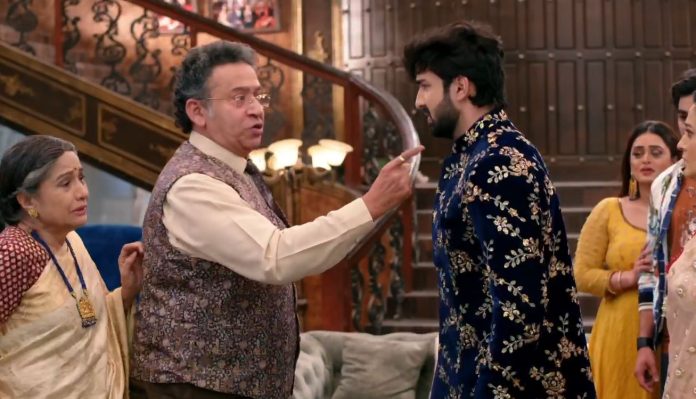 Bhagya Lakshmi 31st December 2021 Written Update Warning Virender warns Rishi that he will lose his son as well if he loses Lakshmi. He tells that if anything happens to Lakshmi, then he will not accept Rishi in the family. Lakshmi gets to see Rishi marrying Malishka in the mandap. She is shattered. She goes away from Malishka’s house. She asks is Rishi her life partner who couldn’t respect their marriage relation. She wants to know why did Rishi cheat her. Rishi sees Lakshmi broken down. He understands that she has seen him with Malishka in mandap. He leaves the mandap and runs away to find Lakshmi, but fails to find her. He reaches home to see if she came back. He argues with Ayush and others. He later informs them that Lakshmi is missing. He has to find Lakshmi. Virender slaps Rishi on learning that Rishi had tried to marry Malishka.

He tells that if anything happens to Lakshmi, then he will not let Rishi free so easily. He asks Rishi to go and find Lakshmi. Neelam is also shocked knowing Lakshmi has seen Rishi marrying Malishka. She worries for Lakshmi. Kiran learns Malishka’s move. She confronts Malishka for the lie. Malishka shouts that it was not her mistake. She doesn’t want to lose to Lakshmi this time. Lakshmi reaches the end of the cliff in a depressed state. She wants to find answers to her Bhagya. Lakshmi looks down the valley and loses her mind. Will she commit suicide? Will Rishi come in time and save Lakshmi? Keep reading.

Earlier in the show, Lakshmi feels Rishi has broken her faith. She hates to see Rishi and leaves. Ayush reaches there. He finds Rishi dressed up as a groom. He asks where was he. Rishi tells that Lakshmi got to know everything about Malishka and him. Ayush asks him the matter. Rishi feels guilty. Malishka asks Rishi to come back for the marriage. Pandit tells that the mahurat is over, the marriage can’t happen now. Ayush is shocked seeing Rishi and Malishka. Malishka still wants to marry Rishi. Ayush asks Rishi did Lakshmi see him marrying Malishka. Rishi cries.

Lakshmi thinks of the times when she had seen Rishi with Malishka and just assumed them to be good friends. She recalls the times when he lied to her, when he got away from her by making excuses and never showed any love for her, when they were in a relation of marriage. She recalls the moment when he confesses that he is indebted to her. She feels he has lied to her. She didn’t think she deserves this truth of Rishi. She goes back to the temple on the roadside and cries. She tells Matarani that she didn’t ask for anything, but she has got a perfect life just to lose out. She cries on the huge deceive. She can’t tolerate it. She feels much pain.

She tells that the love and marriage was all fake, Rishi loves Malishka. She isn’t able to accept the truth. Ayush asks Rishi where is Lakshmi. Malishka tells that Lakshmi would have gone to the family to complain about them. She asks Rishi to reach home before Lakshmi and stop her. She asks Ayush to help Rishi. Ayush cries for Lakshmi. Ayush tells Rishi that he ended everything, he has destroyed everything by his own hands. Malishka asks Rishi to go quickly and fix things before Lakshmi reveals the truth. Lakshmi misses her dad. She felt that Rishi was a blessing for her. She believed that Rishi is her soul mate.

She didn’t know that she is expecting a lot from her fate. She falls lonely. She asks her dad to come back to her and support her. She has no idea where to go and tell the truth of her broken marriage. She isn’t able to hold any hope. She feels everything is finished now. She tells that she won’t be able to live. Ayush gives an angry stare to Rishi. Rishi asks him why is he staring. Malishka calls Rishi. She asks Rishi to not worry, she is with him. She advises him to lie to the family and prove Lakshmi a liar, by denying everything. She tells that Lakshmi will believe their convincing lie.

Ayush asks her not to prove herself as a big fool by thinking that Lakshmi is foolish. He tells that Lakshmi is sensible, she would have understood everything seeing Rishi marrying Malishka. He is relieved that the marriage didn’t complete. He asks her why did she come to marry Rishi when she was marrying Viraj. She tells that he is also blinded by Lakshmi’s fake innocent drama. Ayush lectures Malishka and Rishi as well. He tells that its really a disaster. Malishka hates Lakshmi, who ruined her marriage plans.

She shouts that her marriage couldn’t happen with Rishi because of Lakshmi. She is shocked to see Kiran at the door. Kiran hears everything. She asks Malishka what was she thinking. Malishka tells that its Lakshmi’s mistake who hindered the marriage. She knows that Lakshmi will play an emotional card and make her bad in Rishi and his family’s sight. She shares her sorrow with Kiran. Kiran consoles her. Lakshmi is still walking on the road, recalling Rishi’s lies.

Rishi and Ayush come home and rush to look for Lakshmi. Karishma sees them. She is relieved on seeing Rishi safe. Rishi and Ayush don’t find Lakshmi anywhere. Virender tells that Lakshmi’s phone is not reachable. Neelam calls Lakshmi careless and foolish, unlike Rishi. She blames just Lakshmi who has made the family so worried. She asks Virender not to favor Lakshmi so much. She tells that she scolded Lakshmi because the latter did a mistake.

Neelam tells that its just Lakshmi’s fault to hide about her feelings. She feels she did right to scold Lakshmi. Rishi asks Ayush what happened. Ayush rebukes him for this daringness to question him. Rishi asks Ayush not to lecture him. He tells that their relations will spoil. Ayush asks Rishi if he is scared that something wrong will happen with Lakshmi. He calls Rishi wrong. He asks Rishi how dare he hurt Lakshmi. Rishi tells that he has no time for this drama. Neelam tells that Lakshmi is a human, not any Lord who can’t make any mistake. She asks Virender not to make Lakshmi a great figure. She doesn’t want anyone to cross limits.

Ayush continues yelling at Rishi, who rushes around the house to find Lakshmi. Karishma tells Neelam that Rishi has come home. Virender asks did Lakshmi also come back. Karishma tells that she didn’t see Lakshmi. Ayush and Rishi shout on each other. Rishi tells that he has to find Lakshmi. Ayush asks him to stop this drama, he is the reason that Lakshmi isn’t in the house. The family reaches the living room to meet Rishi. Ayush tells that Lakshmi didn’t deserve to know the truth this way, when she saw Rishi marrying Malishka. Virender hears this and slaps Rishi. Lakshmi reaches the cliff to end her life.

Reviewed Rating for Bhagya Lakshmi 31st December 2021 Written Update Warning: 2/5 This rating is solely based on the opinion of the writer. You may post your own take on the show in the comment section below.