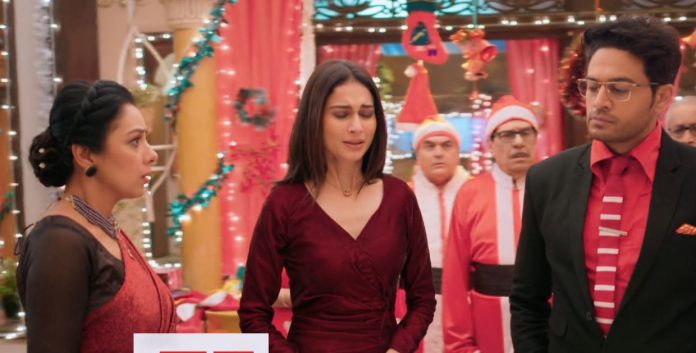 Anupama 31st December 2021 Written Update Huge secret Malvika apologizes to Leela. She asks them to enjoy the party. Kavya thinks Malvika always changes colours. Anuj thanks Anupama for convincing Malvika, which even he couldn’t do. She tells that Malvika is like a child, kiddish. He tells that Anupama is like Malvika’s caring Bhabhi. Anupama tells that even Malvika was saying the same. They share a smile. He gets hopeful that she is reciprocating his feelings. Hasmukh and GK take Anupama with them. She asks them if they are giving her a special gift. They ask her for a gift. They ask her to accept her feelings for Anuj. Anupama feels shy to confess her feelings.

Hasmukh asks Anupama not to make Anuj long for her so much. He asks her who is stopping her now. Anupama tells that she stopped because of Malvika. GK asks how does it matter. She tells that she can tell her feelings to Anuj, but Malvika may feel bad. She wants Anuj and Malvika’s terms to get okay. Hasmukh tells that nothing gets okay in their lives. He tells her that Christmas is the best time to gift the best thing to Anuj, that’s love. They encourage her to tell her feelings to Anupama. Anupama thinks they are right, she should tell Anuj about her feelings.

Samar tells that the family will begin some games now. Malvika tells them that Paritosh has a surprise for someone. Paritosh apologizes to Anupama for his bad behavior and big mistakes. He tells Anupama that he is much ashamed of himself, he was wrong and hurt her a lot. He tells her that he will never repeat his mistakes from now. He asks Anupama to forgive him. Anupama hugs Paritosh. He tells that he wants to become a good person whom Kinjal loved. He promises to into good for the family’s sake. He tells the good news of a job offer, given by Vanraj and Malvika in their new company. Anupama wishes Paritosh all the best.

Kavya gets jealous seeing the family’s happiness and union. Everyone congratulates Paritosh. Nandini tells that they have three Santas, but no gifts. Mama gives them gifts, empty boxes, when he forgets to pack the gifts inside the boxes. Hasmukh and GK also give empty boxes, saying its loaded with their love and blessings. The family shares a laughter. They all get on the dance floor and shake a leg. Vanraj is happy to see Anupama with Anuj. He wants them to unite. Vanraj dances with Malvika, while Kavya angrily comes in between them. Samar tells the family about the blindfold game.

He tells that the participants have to put the garland in the other person’s neck and can demand anything, any promise or gift. Malvika asks them a tricky thing about the real Santa Claus address. Anupama tells that the real Santa stays in their house, they all are real Santa for each other. Malvika tells that the family always fulfill their wishes. She tells that they can’t express their feelings. Anuj and Anupama understand her point. Vanraj tells Kavya that he has learnt to play big games now. Anuj wishes that Malvika never leaves him. Anupama decides to confess her feelings to Anuj. She tells him that she will put the garland on his neck. He asks her what does she want from him now when he already gave him the heart. He doesn’t want to get frank. They get the blindfolds and go for the game.

Reviewed Rating for Anupama 31st December 2021 Written Update Huge secret: 5/5 This rating is solely based on the opinion of the writer. You may post your own take on the show in the comment section below.