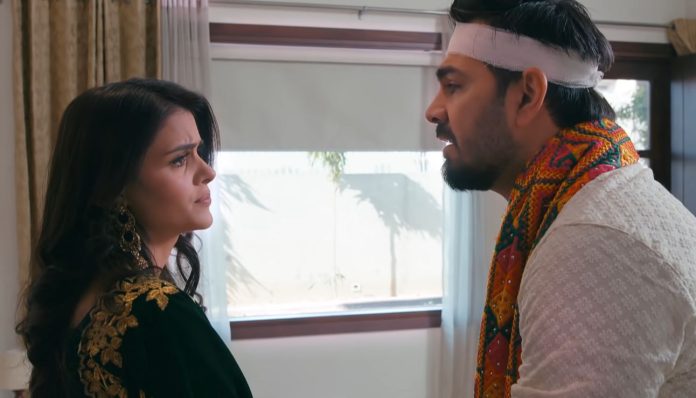 Udaariyaan 1st January 2022 Written Update New promo twist Fateh learns that Tejo loves him. He cries that he made a big mistake and lost her love. Angad and Tejo return home. They get into an argument when she tells that she isn’t the girl who would marry him. Angad asks her to understand that he loves her a lot, he will keep her happy, he will protect her from sorrow, which Fateh has given to her. He tells that Fateh will not take care of her. He asks Tejo to trust him once. Fateh tells that Tejo loves him so much that she couldn’t forget him. Angad slaps Tejo in anger and stops her from leaving his house. He sees the engagement ring returned by Tejo. He tells that he has to get Fateh out of his way first.

Angad and Jasmin can’t see Fateh and Tejo uniting. Tejo tells Fateh that she will decide for her life, Angad and Fateh can’t decide anything. Fateh accepts her decision. She takes the lead. He tells that she is right, he will make herself right and capable to win her love. Angad tells that he can’t let Tejo leave from his life. Jasmin tells that she won’t let Fateh win Tejo’s love. Tejo doesn’t want to return to Fateh, thinking he has been too wrong to justify his actions. Tejo loves Fateh, but doesn’t forgive him. Will Fateh win her forgiveness and also her heart? Keep reading.

Earlier in the show, Angad tries hard to tell Tejo that she also needs a family. Fateh finds them outside the Gurudwara. He goes to hear Angad and Tejo’s conversation. He is shocked to learn that Angad and Tejo’s engagement was fake. He is more shocked when he hears Tejo’s confession of love for him. Fateh cries on hearing about her immense true love that’s just for him. Tejo refuses to marry Angad. She tells him that she will not marry Angad when she loves Fateh. Fateh never expected that Tejo loves him and that’s why she didn’t move on in her life. Angad is shocked too to hear a long speech of love from her that’s just for Fateh. Angad can’t tolerate that she loves Tejo. What will Angad do now? Keep reading.

Fateh cries a lot knowing that Tejo loves only him. He thinks he is such a big fool to hide his feelings from Tejo. He doesn’t know how to tell the truth to Tejo, that he didn’t marry Jasmin and didn’t go anywhere abroad. He wants to get her love now. Fateh regrets that he didn’t understand Tejo’s feelings before. On the other hand, Tejo tells Angad that she just loves Fateh, even if its one sided love. She tells that she can’t do injustice with Angad by marrying him, she knows that the marriage won’t have any significance if it lacks food.

She tells Angad that she will end their fake engagement which gave them fake hope. She adds that she will go away from his life, because she doesn’t want him to cry for her, and lose his cheerfulness. She apologizes to him if she has given him false hopes about their marriage. She makes a leave, while he goes crazy in rage. Fateh wonders why did Tejo fake the engagement with Angad. He wants to know the reason for Tejo’s move. Angad rushes home to stop Tejo from leaving from his life.

Angad reaches home and finds Tejo leaving the house. He struggles to stop her, and then realizes that his rage can leave her in shock if he really shows his insane side. He stays calm and doesn’t show his craziness. He reminds Tejo the promise that she will always take care of Riya and also help him in getting Riya’s custody against Riya’s Nani. He asks Tejo to not leave Riya this way, else it will be too tough. She apologizes that she isn’t the girl who would marry him. He accepts her decision and asks her to just stay back.

He assures that he will never propose her for marriage again. She agrees to stay back in the outhouse. He gets hopeful that he will win her heart soon. Later, he meets Sharma who learns the entire truth of Fateh. Angad brainwashes Sharma against Fateh who is a big fraud. Sharma gets angered knowing Fateh is trying to separate Angad and Tejo. Angad asks Sharma not to fire Fateh from job and keep him home to know his next move. Jasmin is revengeful that she lost the job because of Fateh. She doesn’t want to spare Tejo at any cost. She follows Angad to Sharma’s house. She overhears Sharma and Angad’s conversation. She learns Angad’s love confession for Tejo. She realizes that Angad is really mad for Tejo.

Meanwhile, Tejo gets a shocker when she finds Jasmin in her room. She asks Jasmin the reason for coming. Jasmin asks her to have some shame and spare Fateh. She tells that Fateh is her husband now. She adds that she wants Tejo to get married to Angad for the sake of the families. Tejo knows that Jasmin never wishes the best for her. She is aware of Jasmin’s selfishness. She throws out Jasmin from the outhouse and comes across Fateh, who decides to tell the truth this time. Jasmin acts lovely dovey on seeing Fateh. Fateh gets irritated. Jasmin thinks he will never dare to tell the truth to Tejo.

Reviewed Rating for Udaariyaan 1st January 2022 Written Update New promo twist: 2/5 This rating is solely based on the opinion of the writer. You may post your own take on the show in the comment section below.