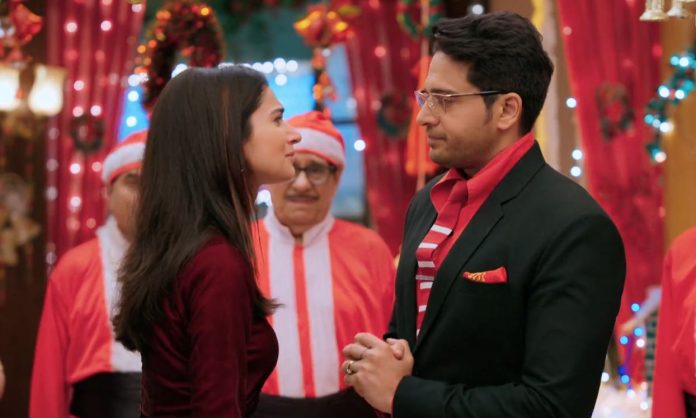 Anupama 1st January 2022 Written Update Anuj proud Vanraj asks Kavya not to put the garland on his neck, he knows she will ask him to change the divorce decision, which he won’t accept. Vanraj puts the garland on Malvika’s neck. She asks what does he want. Vanraj tells that she has given him a big gift already by giving such a business opportunity. The family plays the game. Anuj loses his important envelope. Anupama makes Anuj wear the garland. Anuj tells her that she has won. He asks her what does she want. Anupama tries to make a confession, but feels shy.

She finds it really hard to confess. Anuj grows really anxious until she completes her sentence. Her confession gets interrupted. Anuj asks Anupama to tell it fast, else Malvika to come to ask for the gift. She attempts again, but stops when Malvika creates a scene. Malvika confronts Anuj for his decision to make her the sole owner of the Kapadia empire. Anuj tells that its a Christmas gift for Malvika. Kavya asks Malvika not to spoil their party. Anuj tells that he wanted to give the gift at 12 o’clock, but the envelope fell down.

Malvika asks Anuj what did he think. She tells that she hates Anuj. Anupama consoles Malvika. Malvika hugs her and cries a lot. Anupama asks Anuj what did he do. Anuj tells that he named the entire Kapadia empire and property to Malvika. Kavya asks is Malvika crying for this reason. She finds it strange. He apologizes for spoiling their party. Anuj tells Malvika that everything belonged to her, he was just handling it.

He finds Malvika capable and intelligent now, she can handle the Kapadia empire now. Malvika shouts on him. Anupama asks them to go and talk privately. Malvika refuses to talk to Anuj. Anuj reveals the huge secret, that he isn’t the real owner of Kapadia empire, Malvika is the owner, because he is not Malvika’s real brother, he was an adopted child of her parents. He just wants rights on Malvika’s sorrow and mischief. This truth shocks everyone. Malvika asks Anuj not to say such bitter things. Anuj tells that his parents adopted him, they had no hope of having a child, and then Malvika came in their lives. He tells the truth of his childhood.

He asks Malvika to take back the responsibility, he is really tired of handling it. He tells that everything belongs to Malvika. He apologizes for questioning her on her business decisions. He tells that she is the sole decision taken. Anupama loves Anuj more seeing his greatness and learning about his childhood. Anuj tells that he trusts Malvika and Vanraj’s talents, they both will take Kapadia empire to the peak. GK gives the papers to Malvika. Anuj wishes Malvika merry Christmas. Malvika tells that Anuj is sensible and practical, unlike her. She just wants to listen to her heart. She refuses to accept the empire. She burns the papers.

She tells that she doesn’t want anything back from him. She explains her emotional bond with Anuj. The Shahs get emotional hearing Anuj and Malvika’s childhood tales. Malvika tells Anuj that he had raised her, he can’t leave his responsibility this way, he was busy in securing her future, he was busy in making her dad’s business prosper. She asks him not to be so good and great. She wants Anuj to have his rights, learn to express his rights on her and also on other relations, like on Anupama. Anupama unites Anuj and Malvika. Anupama joins their family.

Reviewed Rating for Anupama 1st January 2022 Written Update Anuj proud: 5/5 This rating is solely based on the opinion of the writer. You may post your own take on the show in the comment section below.