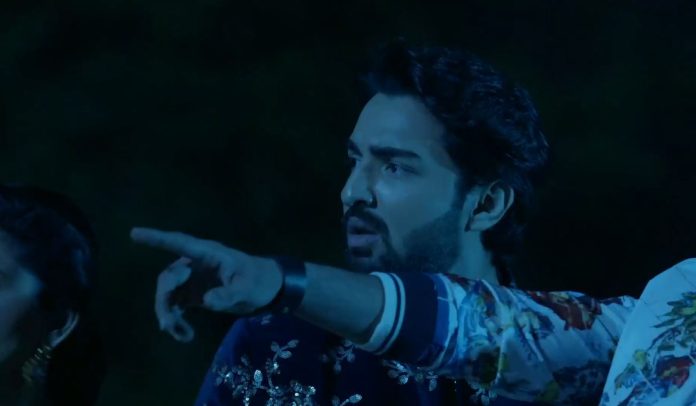 Bhagya Lakshmi 3rd January 2022 Written Update Bad news Virender, Ayush and Rishi try to find Lakshmi. They reach the same temple and come across the lady who guided Lakshmi. Inspector shows Lakshmi’s picture. The lady identifies Lakshmi and tells them how Lakshmi was crying for her husband. She asks Mata Rani about the game played with Lakshmi. She prays for Lakshmi. Rano senses that Lakshmi is missing. She tells Neha that she will take an advantage of this opportunity in a way that nobody can imagine. Rishi and the family members reach the cliff to find Lakshmi. Ayush shows Lakshmi’s saree cloth stuck on some tree.

The family is shocked realizing that Lakshmi jumped down the cliff. Rishi shouts Lakshmi. Virender vents anger on Rishi and calls him heartless. He tells that if anything happened to Lakshmi, then he will end his ties with Rishi. He asks Rishi to go and find Lakshmi. Rishi madly runs on the road, and gets hit by a car. He gets hurt.

Neha calls Ayush and tells that Lakshmi is in temple. Ayush gets curious to know. She lies to him and gets the news confirmed that Lakshmi is missing. Rano tells that she will take an advantage of this situation. The entire family members split up and try to find Lakshmi. Rishi asks pandit if he had seen Lakshmi, who came to Malishka’s house. Pandit tells that he didn’t see her anywhere. Neelam gets too upset with Rishi. Karishma asks Neelam to stay calm. Rishi tries hard to find Lakshmi. He cries when his hopes break down. Virender is much regretful as well. Ayush calms down Virender.

The police also searches for Lakshmi. They carry Lakshmi’s pictures to search for her. The lady identifies Lakshmi and helps the police. Ayush and Virender reach the cliff by following the hints. Ayush is shocked to see Lakshmi’s saree cloth stuck there. He freezes. Rishi also reaches and asks Ayush if he found Lakshmi. Ayush cries for Lakshmi. The entire family is shocked.

Rishi cries for Lakshmi. He thinks of their moments when she cared for him and saved his life. He regrets a lot and sinks in guilt. He feels he has lost his Lakshmi, that she couldn’t tolerate his deceive and ended her life. The lady tells Inspector that Lakshmi had come to search for her husband, she was running on the roads madly, she was running to save her husband. Inspector learns about Lakshmi, who might have jumped down the cliff. The lady calls this a disaster. She asks Mata Rani to save Lakshmi. Rishi tells the family that Lakshmi can’t commit suicide, his heart is saying that she is alive. Virender tells Rishi that he will never forgive him. He rebukes Neelam for favoring her son.

He tells that Rishi had broken Lakshmi’s heart, Lakshmi is sensible, but she won’t be able to handle such a shock. Police reaches the cliff. Karishma shows the saree cloth. Inspector tells them that Lakshmi was running in the stormy weather to save her husband. She asks Rishi if he had a fight with his wife. Virender cries for his daughter. The family prays for Lakshmi. Sonia speaks to Malishka on the call. She tells that Lakshmi is missing, she is torturing the entire family. Malishka tells that she is scared that Lakshmi may take a big step. She asks Kiran to leave her alone for some time. Kiran asks her if she spoke to Rishi. Karishma tells that they shall go to Rano’s house and check once.

The family comes to Rano’s house and look for Lakshmi. They don’t find Lakshmi anywhere. Rano asks them the matter. Karishma tells that they will inform later. Neelam tells that Rano has a right to know about Lakshmi. Karishma tells that Lakshmi left the house after a fight with Rishi. She hurries to find Lakshmi. Malishka meets Virender and asks if he found Lakshmi. She calls Lakshmi careless. He reprimands her for the big lie. He calls her insensitive and selfish. She asks him where does she stand in Rishi’s life, nobody cared for her feelings, he just worries for Lakshmi, not her.

He tells that he wanted to understand her and care for her, he wanted to protect her from sorrow, but she cheated them by attempting to secretly marry Rishi. He tells that Lakshmi has become her daughter now. He adds that she will never understand that the relations based on lie will never prosper. He is much hurt. He asks her to understand his pain, she had stabbed Lakshmi’s trust, she had injured Lakshmi’s caring heart. He warns her.

Reviewed Rating for Bhagya Lakshmi 3rd January 2022 Written Update Bad news: 3/5 This rating is solely based on the opinion of the writer. You may post your own take on the show in the comment section below.