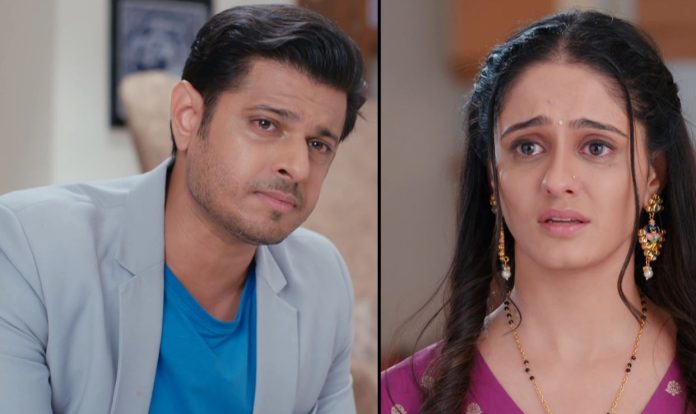 Ghum Hai Kisikey Pyaar Meiin 10th January 2022 Adamant Sai Virat tells Sai that he is fine with her decision. Sai asks Virat who told him that she needs his approval. Virat tells Sai that he is aware that she doesn’t need his approval and will not interfere in her decisions anymore. He asks Sai to let him do one thing for her. Virat asks Sai to let him fulfill his responsibilities towards her. Sai tells Virat that his shoulders will break by taking so many responsibilities. She asks him to fulfill Shruti’s responsibility and not care for her. Virat asks Sai what about her financial needs? Sai tells Virat that she gets a scholarship for her education finance.

She further tells Virat that for her other financial needs she has her father’s fund money. Sai also tells Virat that god helps her if she faces any other financial crises. She says she wouldn’t have taken any help from him even if there would not have been anything to help her in her financial needs. Virat looks at Sai shocked. Devi cries and runs towards the Chavan family. She shocks them by telling them that Sai is leaving the house. Pakhi thinks Sai never returns this time. Ninad says Sai will not go anywhere. Sonali says Sai runs from problems every time and the whole family goes behind her to convince. She says Sai should instead solve the problem by remaining in the house only.

Sonali speaks a lot against Sai and her habit of leaving the house. Bhavani too talks ill about Sai. She says running away from problems isn’t the solution and Sai should instead face the problem. Karishma agrees to Bhavani. She says Sai always does what she finds right but everyone scolds her. Bhavani gives Karishma a look. Mohit asks Karishma to shut up and think of Sai’s situation before speaking. Pakhi asks Mohit why Karishma should think of Sai’s situation? She says Sai even doesn’t understand that she shouldn’t stake family’s reputation in anger. Pakhi says Sai makes people talk bad about them by always threatening to leave the house.

Sonali agrees to Pakhi and talks ill about Sai. She tries to provoke the family against Sai. Sonali says what people will think about Chavans when they will get to know that their daughter in law wants to stay separately without divorce. Sai drags her bag on the floor. Virat and Sai look at each other emotionally. They recall their marriage and the moments they spent together. Both of them continuously stare at each other with pain. Ashwini asks Sonali why is she talking about divorce? Sonali says people act and she can’t even talk. She says whatever is happening between Sai and Virat, its next step is divorce only. Sonali’s words shocks everyone. She asks if every wife leaves with her stuff like this after fights?

Samrat asks Sonali if she would have advised her own daughter the same thing (to tolerate wrong) that she is trying to advise Sai. Pakhi feels irritated with Samrat’s words while Sonali gets quiet. Samrat says he is with Sai in her decision as Sai is like his younger sister. Ashwini asks Samrat if he means that Sai should leave the house and family. Samrat says he meant that Sai should have freedom to make her own decisions. Pakhi feels happy. Ashwini asks Samrat if he means that Sai should take divorce from Virat. Samrat says Sai should also do as she wishes if Virat is going as per his wishes. Ashwini reminds Samrat that she tried a lot to save his and Pakhi’s marriage. She asks Samrat how can he even think of Sai and Virat’s divorce?

Samrat says he is just talking about supporting the right person. He says this time Sai is right and Virat is wrong. Samrat further says if Sai is feeling suffocated and her self-respect is getting hurt by living in this relationship, he won’t want Sai to be in this relationship. He explains to Ashwini that everyone’s relationships with Sai will remain the same and will not get affected. Pakhi says Samrat is right and everyone is very well aware of Sai and Virat’s decision. Devi asks what does Dicorce mean and why is everyone scared of it. Pulkit explains to Devi that Sai will have to stay separately from her in-laws after divorce.

Devi says they will hide Sai and nobody will know about it. Pulkit explains to Devi that there is no rule that Sai will have to leave Chavan Niwas but it will be her wish. Devi declares that Sai won’t go anywhere as Chavan Niwas is Sai’s house and Chavans are her family. Mansi says Sai won’t go anywhere as she is also part of the Chavan family. “Ghum Hai Kisikey Pyaar Meiin” title song plays in the background. Sai leaves Virat’s room with her bags. Pakhi doesn’t let Mohit call and inform Virat about Sai leaving the house. She says Sai will get angry and scold them.

Sai says she doesn’t want to do anything Pakhi said as she has made her decision. Devi tells Sai that she isn’t going anywhere. Bhavani and Sonali talk ill about Sai and call her dramatic. Sai says someone very close to her forced her to make this decision and everyone knows about it. Ninad tries to stop Sai. Sai says she won’t go without informing him. Pakhi talks ill about Sai and Devi shuts her. Sai says she will stay at her hostel. Omkaar asks Sai to not ruin Chavans reputation outside and sort her issues with Virat. Sonali says Sai would not know how to live like someone’s daughter in law. Sai gives a befitting reply to Sonali which angers the latter.

Sonali tells Sao that Karishma is better than her in many things. Ninad, Mansi, Samrat, Devi and Ashwini try to stop Sai. Sonali says Karishma won’t even think of doing something like this. Sai says she is stronger than Karishma. She asks everyone to take care of each other. Sai cries and says she will come to meet them often. She asks everyone to understand the reason behind her decision. Samrat tells Sai that everyone understands her situation. He tells Sai that she is snatching their rights from them. Pakhi asks Samrat to get silent saying that Sai can give him a befitting reply too.

Sai says it’s the better decision for her at present. Ninad asks Sai how she can punish everyone for Virat’s mistakes. Ashwini asks Sai if she ever discriminated between her and Virat. Devi reminds Sai how she helped and made her life happy again. She tells Sai that she will get alone if she leaves. Sai tells Devi that she can remain happy with Pulkit and Harini. Samrat tells Sai that he will return to Mahabaleshwar again as he got convinced to live in Chavan mansion because of her only.

This shocks the Chavan family. Virat recalls the promises he made to Inspector Kamal and Sadaa. He thinks he is breaking his promise to Inspector Kamal to fulfill his promise towards Sadaa. In the next episode, Sai will return Virat a ring and leave Chavan house. Virat will think that he has no more energy left to repeat his words or can prove his innocence. He will continue looking at leaving Sai.

Reviewed Rating for Ghum Hai Kisikey 10th January 2022 Written Update Adamant Sai: 3/5 This rating is solely based on the opinion of the writer. You may post your own take on the show in the comment section below.