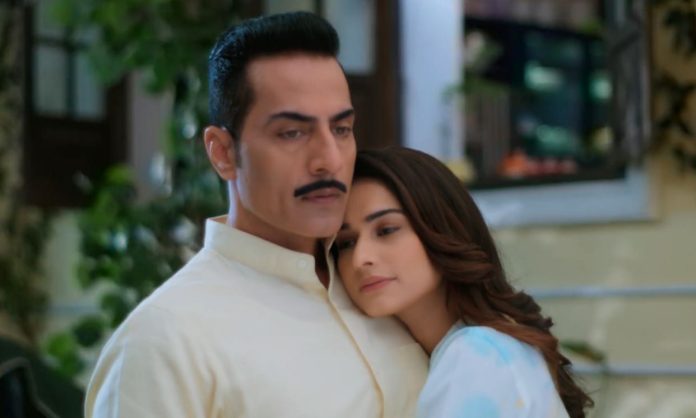 Anupama 4th January 2022 Written Update New love story Anuj says maybe. He asks Anupama if she didn’t feel bad. Anupama says not at all. She tells Anuj that she told him when she felt bad, when he kept Malvika a secret. Anuj thanks Anupama. Anuj says people always believe that blood relations are the strongest. He further says that these kinds of people don’t realize that a woman doesn’t become a mother just from blood but from heart. Anuj continues explaining that the strongest/ deepest relationship/bond forms when a mother embraces her child, when they feel each other’s heartbeat and when the child for the first time holds his/her mother’s fingers.

Anuj says that he is fortunate that life gave him the deepest bond of him and his family. He says he never insulted Kapadia’s love, thinking of it as a favor. Anuj tells Anupama that he always felt a sense of responsibility. He also tells Anupama that he got everything very easily in his childhood for which people need to deserve it before attaining it. Anuj says because of all this he became determined to prove himself worthy of what he has been given. He says he had to prove that he deserved to get such a lovely family and their love.

At Shah house, Vanraj sees Malvika removing Christmas decorations. He asks her why she is doing all this? Malvika says she woke up and didn’t know what to do. She says as others are still sleeping, she decided to remove Christmas decorations. Vanraj asks only for this reason she is working. Malvika tells Vanraj that she should help as she also enjoyed the party. Vanraj tells Malvika that Jhilmil will do it when she comes. Malvika says Jhilmil’s Christmas will become Merry seeing everything cleaned. Vanraj asks Malvika if she will not agree to him. Malvika says she wasn’t born on agreement day.

Malvika asks Vanraj if he was shocked to know about her and Anuj? Vanarj says, yes. Malvika tells Vanraj that Anuj is very nice but says stupid things some times. She asks Vanraj to not take the thing about adoption seriously. Malvika repeats it again and again. Vanraj says why would he? Malvika gets into thinking. On the other hand, Anuj tells Anupama that he never took any decision thinking about profit or loss. He tells Anupama that he always thinks that his parents should be happy and proud of his decisions. Anuj further says that he got his parents’ time and love more than Malvika. He says that when his parents suddenly died, he made it his important responsibility to give their parent’s share of love to Malvika.

At Shah house, Malvika tells Vanraj that Anuj is the best and most understanding brother in the world. She also tells Vanraj that she pesters Anuj a lot, but he never complains. Malvika says she came to Shah house after fighting with him. She says she never thought about how bad Anuj would have felt or how worried he would have gotten. Malvika says Anuj wants to give an idiot like her whole Kapadia empire. She says she even doesn’t know how to spend 2000 rs when someone gives it to her and Anuj is giving her entire Kapadia empire. Vanraj reminds Malvika that it is a Rs.1000 crore empire. Malvika says it doesn’t matter to her as she doesn’t want any such big responsibility.

Vanraj asks Malvika, doesn’t she want to be the owner of such a huge business? Malvika says not at all. She further tells Vanraj that she only wants to do what she feels like. Malvika tells Vanraj that she will do business with him if she feels like otherwise she will go away leaving the whole business to him. She says that she just wants to happily live with her brother and is going to burn real legal property papers kept with the lawyer. Malvika says everything should be kept with Anuj as he earned it with his efforts. She says she is happy the way she is. Anuj tells Anupama that instead of him, the present moment between them is special. He says a shayari about the precious moment.

He asks Malvika to think of everything from Anuj’s point of view. Vanraj tells Malvika that every brother wants his sister to grow further and achieve something in her life to be proud of her. Malvika asks Vanraj if he is explaining her or provoking her? On the other hand, Anuj tells Anupama that he gets happiness by spending time with her instead of from money, business, shares and bank-balance. Anupama asks Anuj if he doesn’t feel that money is also important to live life. Anuj explains to Anupama that people earn money to save instead of living and forgets to live life. He says he thinks middle class people are the happiest people as they get to spend time with their family.

At Shah house, Malvika asks Vanraj if he isn’t talking about serious things early in the morning. She tells Vanraj that she would surely think about what he said. Vanraj asks Malvika what happened 10 years ago that made her leave Anuj. Malvika gets tense and leaves making an excuse. Anuj discusses with Anupama that he doesn’t like his present lifestyle and thinks about going away giving everything to Malvika. He tells Anupama that he wants to be simple like her. Anuj tells Anupama that she remains happy even in a cotton saree. He jokes making Anupama smile. Anuj says life exudes fragrance when it is made of soil not of gold and silver.

On the other side, Malvika apologizes and tells Vanraj that she didn’t want to talk on that topic. Vanraj accepts Malvika’s apology. Malvika asks Vanraj to think a lot before divorcing Kavya. She explains to him the importance of family and wife. Anupama on the other side tells Anuj that only he matters to her, not his identity. Anuj feels good about it. Anupama further tells Anuj that the only thing that matters to her is that he loved her for 26 years and kept respect for her. Malvika apologizes to Vanraj and shares with Vanraj that if a relationship breaks it hurts her a lot. Malvika again tries to explain to Vanraj to save his marriage. Kavya watches Malvika hugging Vanraj from a distance.

Anupama tells Anuj that his respect has increased in her eyes. Anuj tries to tell Anupama about another secret of Malvika but fails. Anupama tells Anuj that it is fine, he can tell her whenever he feels comfortable about it. She tells him that it is also fine if he doesn’t tell her. Anuj thinks he would never be able to tell her about Malvika’s secret ever. In the next episode, Anuj will tell Anupama that he could have missed India-Pakistan’s match to fix her saree pleats if she would have been Malvika’s sister in law. At Shah house, an angry Kavya will ask Malvika why she hugs Vanraj again and again. Malvika will tell Kavya that not everyone is Pati Chor (PC) like her. Anuj will notice GK taking some promise from Anupama.

Reviewed Rating for Anupama 4th January 2022 Written Update New love story: 5/5 This rating is solely based on the opinion of the writer. You may post your own take on the show in the comment section below.