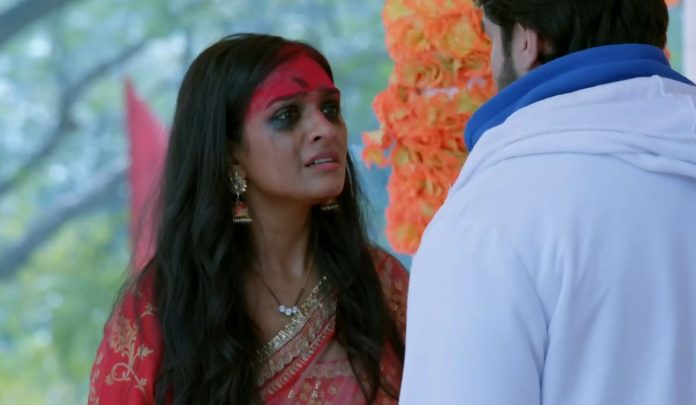 Bhagya Lakshmi 5th January 2022 Written Update Marriage breaks Lakshmi casts her anger on Rishi. She asks Rishi to break the relation of their marriage in front of Mata Rani. She breaks the marriage. Malishka tells Lakshmi that Rishi used to love her since the time when he didn’t meet Lakshmi. Lakshmi asks Rishi why did he marry her then by getting under the family pressure, he should have told her about it before. Malishka tells that the family knew it since always, Rishi was helpless to marry Lakshmi. Lakshmi tells Rishi that their relation is now over. She breaks her mangalsutra. Rishi is shocked to see this. Will he fall into danger with Lakshmi’s breaking the marriage? Keep reading.

Earlier in the show, Neelam finds Rishi murmuring in sleep and asking Lakshmi to never leave him. She wakes him up. He asks her about Lakshmi. She tells that they couldn’t find her. She adds that he met with an accident, he got hit by Malishka’s car, and then Malishka dropped him home. She asks him to have food. She tells that they are still trying to find Lakshmi. Rishi goes to pray for Lakshmi. Lakshmi is at some temple. She wakes up by the temple bells.

She goes to pray. She gets chosen by the pandit to perform the maha aarti. Lakshmi recalls Rishi’s deceive while performing the aarti, Malishka’s pandit spots her and goes to call Malishka and Rishi. He calls Rishi and informs him about Lakshmi. Rishi asks where is Lakshmi. Pandit tells that Lakshmi is performing the aarti at Durga temple, she will be leaving soon. Rishi tells the family that they found Lakshmi. He runs out of the house. Lakshmi breaks down in tears. Stay tuned.

Pandit ji arrives home. He asks Neelam about the preparations. She welcomes him home to conduct the special prayers for Lakshmi. Dadi prays that Rishi finds Lakshmi. Rishi is on the way to the temple. Malishka calls him to know where is he going. He tells that he is going to Durga temple. She asks him if he is going to attend a puja. He informs that he is coming to get Lakshmi. She tells that she is also coming. He doesn’t want her to come. Rishi gets late in reaching the temple. He worries that he may miss out Lakshmi. Lakshmi is at the temple. Rishi speeds up the car and reaches the temple. He runs upstairs to meet her. Lakshmi cries when Rishi’s memories flash in her eyes.

Malishka also reaches there at the same time. She also runs after Rishi. Lakshmi recalls Rishi and Malishka’s lies. Rishi arrives there. He is shocked to see Lakshmi. She cries seeing him. Rishi and Malishka feel guilty seeing her tears. Rishi runs to Lakshmi. He tells her that the entire family was worried for her, he was trying to find her. He asks her to come with him, the family is waiting. Lakshmi tells Rishi that she always believed him, he is saying sorry for his mistakes. She adds that her nightmare was right, he was really going away from her, he was going to marry someone.

He goes to hold her. She tells that he has no right on her now. She feels its a punishment to her for her faith, she should never trust anyone, the world isn’t deserving of her. She reprimands Malishka who interferes between them all the time. She shouts that Rishi is her husband, and Malishka dared to marry him. She asks Rishi was his love and care a drama. She tells that he should have told her the truth that he loves Malishka, then she would have left him for the sake of his happiness.

She asks why didn’t he tell the truth. Rishi tells that he didn’t wish to hurt her. She reminds that telling the truth doesn’t hurt, lies and secrets hurt. She tells that she can tolerate anything, but not lies and cheat. She asks him to stop explaining anything, because he didn’t tell anything when he had the time on his side. She feels disgusting seeing his dual face. She asks him how did he live with her by faking goodness and happiness in their bonding. She asks Rishi how did he lie to her.

She feels foolish to believe him. Malishka tells that Rishi is just of her. Lakshmi asks her to shut up. She reminds that Rishi has married her, he wasn’t of Malishka. She tells that the entire family accepted her and gave her the rights of Rishi’s wife in the house, he was just of her until the last night when he went to marry Malishka. She feels mad to think that he loves her. Rishi feels terribly sorry by Lakshmi’s blames.

Reviewed Rating for Bhagya Lakshmi 5th January 2022 Written Update Marriage breaks: 5/5 This rating is solely based on the opinion of the writer. You may post your own take on the show in the comment section below.