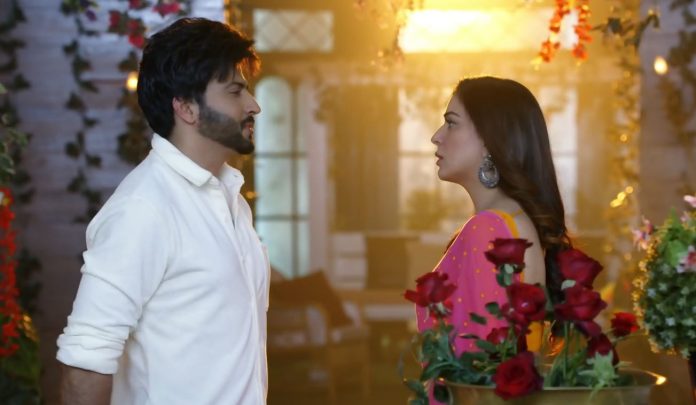 Kundali Bhagya 5th January 2022 Written Update Preeta warns Karan Karan tells Preeta that she didn’t change at all. She warns him. She tells that she has not come as his wife, but the house owner. He tells that he doesn’t believe her, she can never become the house owner. She tries convincing him with the drama. Karan wants to know her real motives. Prithvi tells Sherlyn that he has increased the drug dose for Mahesh to make him go more mentally unstable, so that Preeta gets convinced of Mahesh’s madness. He wants Preeta to see Mahesh’s madness and believe it. Sherlyn tells that she feels like he is getting scared. He replies that he isn’t scared of anything. He is sure that he can handle Preeta. He tells that he is just changing his strategy this time.

She tells Sherlyn that the family told Karan the truth, and now Karan will handle Preeta, he will show her the right place. Karan and Preeta meet in a filmi moment. He tells that he will fight her even if she gives him a rose. She tells that she didn’t get a rose for him. She sees love in his eyes for her. He asks her to look at him. They have an eyelock. They get into an emotional moment. He hugs her with love. His anger melts down.

He tells her that he started drinking in sorrow after she left him, he was dreaming about her when she came home, he saw her and told all that to her. He asks her not to look at him with love. She advises him to take some time and decide if he wants to fight her or romance. He tells that its a good idea, he will decide and come. He goes. He thinks he got mad, he melted his anger in a day, he still loves her. He tells that she wasn’t there for two years. He thinks he should go and fight with her, she is a different Preeta now, she has come to boss him. Preeta also wants to stay in her senses and not go mad after Karan. She reminds herself the real reason for her coming. She wants to control her heart, like she controlled since two years.

She tells that her heart melted when Karan came in front of her eyes. She thinks her motive is different, she has to become rough and tough, nobody should know her real feelings. Sherlyn and Kareena try to go and find out, if Preeta and Karan are fighting. Natasha hears their conversation. She tells that there is no such argument happened. Kareena wants to go and see them once. Natasha tells that Bani is calling Kareena. She sends Kareena. She tells Sherlyn that she has seen Kareena hearing Sherlyn and Prithvi’s talks.

She asks Sherlyn not to get so much free with Kareena, if the latter likes Preeta, then Prithvi will become her enemy. Sherlyn asks her to stay in limits and not lecture her. She tells that she hates Preeta and Kareena hates Preeta even more. She thinks Karan has become Romeo on seeing Preeta. She tells that they might be romancing, not fighting. Natasha tells that it will be bad for them. Sherlyn assures that she will plan something. Natasha tells that she is scared of Preeta. Sherlyn wants to snatch the money and power from Preeta. She believes Prithvi who will ruin Preeta’s peace. She goes to plan the night event.

She asks him will he be together with her all their life. Karan promises her. He asks her if she will give him another chance. She nods in reply. They get emotional. This turns out to be Karan’s dream. Preeta asks him to stop dreaming, she will not apologize to him, maybe he should apologize. She asks him to go and take some rest. She tells him that she will make him do a lot of work, she will become a good boss. She decides to stay away from him. She wants to find out how did Mahesh lose his sanity, maybe he is drugged. Sameer meets Karan. He tells that its good that Karan didn’t fight Preeta.

Karan lies that he fought with her. Sameer tells that he will not believe anything such. He tells Karan that he loves him and knows him well. Karan feels Preeta has changed. He tells that he went to fight with Preeta, but couldn’t say a word. He adds that he never tells sorry to anyone, but he told sorry to Preeta today, but in his dream. Sameer asks him to express his heart. He asks Karan to talk slowly, else it will be a new drama in the house. Karan really thinks that Preeta did some magic on her. The family is worried thinking the outcome of Karan and Preeta’s fight. Bani doesn’t want Preeta to trouble them a lot. Natasha asks Bani why is she so tensed. Bani tells that Natasha doesn’t know Karan well.

Karan returns to them. Kritika asks Karan did he tell Preeta that he doesn’t love her. Karan tells that he scolded Preeta a lot. Bani tells that Preeta didn’t shout. He tells that she was shouting and he had made her quiet. Natasha puts him into a fix. She asks him to scold Preeta in front of the family. Prithvi gives Mahesh’s new medicines to the nurse. He tells that its heavy dose. He asks her to just follow her instructions. He meets Sherlyn. He tells that he has got a higher dose for Mahesh this time to make her appear totally insane in front of Preeta. He adds that he isn’t scared of anyone, but is just changing his plans.

Reviewed Rating for Kundali Bhagya 5th January 2022 Written Update Preeta warns Karan: 4/5 This rating is solely based on the opinion of the writer. You may post your own take on the show in the comment section below.