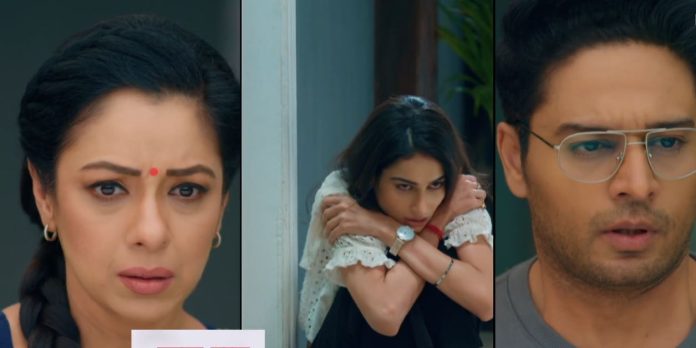 Anupama 6th January 2022 Written Update Gruesome past Malvika tells Vanraj that they need to send the plan of publicity and marketing to their investors with a timeline. Kavya tells Malvika and Vanraj that she knows many PR agencies if they need help. Malvika thanks Kavya but Vanraj angrily says he is also aware of those PR agencies. Malvika asks Vanraj to relax as Kavya is just trying to help. Anuj and Anupama reach Shah house and greet everyone. Malvika asks Anupama how she can stay away from Shah house. Mamaji says because small fights go on in this house.

Baa asks him to shut down. Malvika advises Anupama, Anuj and GK to shift to Shah house. Kavya suddenly stands up hearing it. She asks Malvika to ask GK to shift to Shah house with the whole neighborhood. Kavya sarcastically says to Malvika that Shah house is not a house but a dharamshala. Malvika asks Kavya to relax because she didn’t mean anything, what she said. She says that she just wanted to say that the people of Shah house are very sweet. In a low voice Mamaji tells Baa that Malvika hasn’t seen the real face of Shah house.

Malvika tells Anupama that she would stay at Shah house if it was in her hands. This shocks and angers Kavya. Kavya signs Anupama to take Malvika away from Shah house. Anupama asks Malvika to come to the office with her and Anuj. She also asks Malvika to come home after office as they will celebrate New Year with a party at home. Malvika angrily tells Anupama that she doesn’t celebrate New Year and Anuj knows about it. Malvika’s anger shocks and confuses everyone but irritates Kavya. Anuj tries to change the topic, asking Malvika to let’s go to the office as it’s getting late for work.

Anupama asks about Pakhi’s whereabouts. Kinjal and Paritosh tell her that Pakhi went to school early. They say they need to leave for work too. Samar asks everyone to let’s leave for office together. Everyone agrees and starts leaving together. Kavya grabs Anupama’s hand and takes her aside to talk. She rudely asks Anupama to take Malvika back home, today itself. Anupama asks Kavya to have patience as she can’t forcefully take Malvika home by holding her ears like a kid. Kavya warns Anupama by telling her both of them very well know that Vanraj takes advantage of people’s weakness, once he gets to know about it. She further warns Anupama by telling her that Vanraj got to know that Malvika is Anuj’s weakness and Kapadia empire’s owner as well.

Kavya continues warning Anupama to be careful as Vanraj may use this information for his advantage and her and Anuj’s disadvantage. Anupama tells Kavya that Vanraj has changed and will not do such a thing. Kavya tells Anupama that people like Vanraj never change. Anupama asks Kavya to not doubt someone so much that they stop trying to change themselves. She asks Kavya if they both changed then why can’t Vanraj change. Kavya asks Anupama if she wants her to trust Vanraj? Anupama replies yes. Kavya asks Anupama if she can take Vanraj’s guarantee? Anupama tells Kavya that Vanraj is her husband, not a mixer grinder with guarantee.

Anupama takes a leave to go to the office. Kavya asks Anupama if she is showing off that she is sitting at home while she (Anupama) is going to the office for work. Anupama tells Kavya that household chores are not smaller than office work and no one knows it better than her. She explains to Kavya that a woman should know that both office and household work are equal and should be proud of doing what she is doing. Anupama leaves asking Kavya to try changing her thinking. At office, Vanraj asks Malvika to not worry as he completed the whole presentation and they will surely celebrate victory. He apologizes seeing that not Malvika but Anuj and Anupama are standing behind him.

He tells Anupama and Anuj that he will try to help Malvika with his 30 years of experience. Malvika comes and says that Anuj will be giving today’s presentation. This shocks Vanraj badly. Anuj requests Malvika to let Vanraj handle it as he worked hard for it and has a good experience too. Malvika tells Anuj that it’s about impression not experience. Malvika apologizes to Vanraj and explains to him that they will surely get the project deal if Anuj handles the presentation as he has a good impression in the market. She uses a film poster example. Vanraj tries to know Malvika’s opinion about Anupama.

Anupama notices Vanraj trying to hold his anger and patience during the meeting. Kavya rings the plate to make an important announcement. Baa thinks Kavya is pregnant. Kavya says she is planning a new year party with dance, food and games. Pakhi says they always party like this only. Seeing Kavya feeling bad, Kinjal tries to light up the situation. She says they will do the same thing in Kavya’s style. Bapuji makes Kavya happy saying that for sure something new will happen as Kavya has planned a party. Pakhi asks Kavya to organize new games, and Kavya agrees. Shahs discuss that Kavya forgot flying. They hope Kavya becomes good and confident.

Shahs hope no problem arises due to Malvika in teb new year party. On the other hand, Malvika excitedly thanks Anuj for helping her get the project deal. forgetting. She makes a joke making Vanraj laugh. Anupama gets confused seeing Vanraj’s confusing behavior. Malvika asks a puzzle and asks who always comes with Anupama. Vanraj answers “Anuj”, making Anupama and Anuj shy. Malvika calls Anupama lucky for them. Anuj explains to Malvika that Anupama is “Grah Lakshmi”. She thanks Vanraj for understanding that it was important to let Anuj handle the meeting. Vanrah says he has no other option than understanding, till he becomes a big businessman like Anuj.

Everyone feels shocked hearing Vanraj’s words. Everyone at the office gets Kavya’s invitation for the new year party in a group chat. Kavya has also written that it’s fine if Malvika doesn’t want to attend the new year’s party. Malvika messages that she won’t be able to attend the party. Kavya asks Nandini what happened? Nandini recalls that Samar asked her to give Kavya a chance. She asks Kavya if everything got sorted between her and Vanraj. Kavya replies to Nandini that everyone forgave her except Vanraj. She seeks Nandini’s advice. Kavya shares the pain of being alone and unhappy with Nandini. Nandini asks Kavya to not worry as everything would get better.

Kavya asks Nandini to decide if she wants to repeat her (Kavya’s) mistake or learn a lesson from her mistakes. Nandini gets scared and shocked with Kavya’s words. On the other hand, Vanraj thinks of becoming a big and rich man at any cost. Anuj tells Anupama that he won’t be able to celebrate New Year with her as he can’t leave Malvika alone. Anupama asks Anuj, ” Can she try convincing Malvika”. She says she tries her best to convince Malvika and make her happy? Anupama says she will try for both Malvika and him. Both Anuj and Anupama get awkward. “Aye Mere Humsafar” plays in the background.

At Nandini’s house, Kavya tells Nandini not to think that she is trying to provoke her. She tells Nandini about the condition of married jodi’s in Shah house. Kavya asks Nandini to carefully decide if she wants to live in Shah house with the whole family after marriage or not. She advises Nandini to stay separately and peacefully with Samar after marriage. Kavya also advises Nandini to not get married as love doesn’t stay after marriage. Samar overhears this and feels angry. On the other hand, Anuj tries to flirt with Anupama. He tells her that his new year will be special this time. Anupama leaves, getting shy.

Anuj realizes that Anupama was blushing on his flirting. He wonders if Anupama is falling for him. Both of them smile with shyness and hope. Anupama says, “Bholu Ram”. In the next episode, Anupama and Malvika will be seen playing stapoo. Anuj will notice it. Anupama will win and convince Malvika to attend the New Year’s party. Malvika will recall her scary past. Anuj and Anupama will get shocked seeing scared and vulnerable Malvika.

Reviewed Rating for Anupama 6th January 2022 Written Update Gruesome past: 4/5 This rating is solely based on the opinion of the writer. You may post your own take on the show in the comment section below.