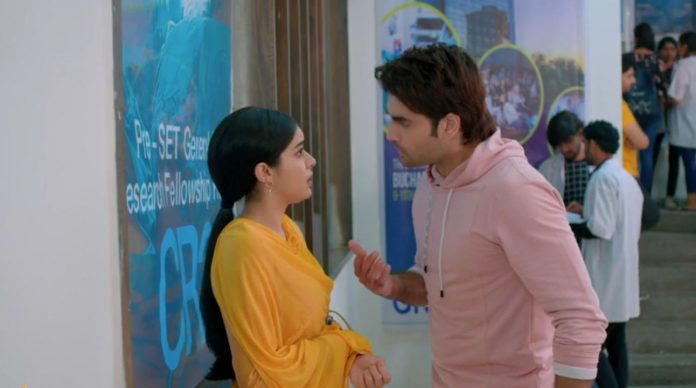 Sirf Tum 6th January 2022 Written Update Suhani shatters Ranveer takes Suhani aside. Suhani tries to leave but Ranveer doesn’t let her. She feels emotional and tense. Ranveer tells Suhani that he can tolerate or accept her anger but not her ignorance or indifference. He tells Suhani that he always keeps her in front of his eyes. Ranveer further tells Suhani that her avoidance pricks him a lot. Suhani feels shocked. Ranveer asks Suhani why she came to college with Ansh? He asks her doesn’t she know how filthy Ansh is?

Ranveer further asks Suhani how she gave Ansh the permission to keep his hands on her shoulder? Suhani tells Ranveer that it isn’t necessarily true what they always see. She tells Ranveer that he will not understand what she is saying as he only knows to be angry or beat people. Suhani requests Ranveer to be away from her and not involve her name in his life of fights. Ranveer grabs Suhani’s hand and tells her that he didn’t finish his talk till now. Suhani feels scared of Ranveer and tells him that her hand is hurting. Ranveer leaves Suhani’s hand and apologizes to her.

Ranveer feels confused and angry. Suhani tells Ranveer that her family won’t tolerate all this. She requests Ranveer to not repeat what they did the day before. Suhani further requests Ranveer to let her go and to not follow her. She leaves and both she and Ranveer feel the pain of separation. On the other side, Rakesh wipes his tears and starts his bike but fails. Oberoi’s Gardner asks Rakesh to put the key in the bike to start it. Rakesh puts the key, starts his bike and leaves. On his way, he recalls Vikrant’s pricking taunts. He recalls Vikrant asking him how he could use his daughter to trap his (Vikrant’s) son and dream of becoming rich?

Rakesh continuously recalls Vikrant’s harsh taunts telling him to give his daughter’s responsibility to some other rich men. He further recalls Vikrant ordering him to keep his daughter away from Ranveer as otherwise he would pay for it. Rakesh escapes an accident on his way. On the other hand, Ranveer punches the punching bag continuously in anger. He gets angrier recalling Suhani’s request to be away from her. Raghav and John ask Raghav to stop as he would fracture his hand this way. John tries to stop Ranveer but the latter pushes him away.

On the other hand, Rakesh reaches his home in a sad condition. Sudha takes office bag and helmet from Rakesh and keeps them aside. Suhani offers water to Rakesh. Dejected Rakesh throws something and drinks water. Suhani says she will bring tea for him. She gets shocked when Rakesh announces that she won’t go to college from the next day. Everybody else also looks shocked. Suhani looks at her mother scared. Sudha signs Suhani to relax. She tells Rakesh that Suhani is working hard for her dream. Sudha further asks Rakesh why he suddenly announced that Suhani won’t go to college.

Rakesh recalls Vikrant telling him that the intentions of small people like him are also as small as his status. Sudha tells Rakesh that Suhani’s internal exams are starting the next day. She asks Rakesh how Suhani will become a doctor if she won’t give exams. Rakesh recalls Vikrant asking him to give his daughter’s responsibility to some other rich person. Sudha reminds Rakesh that it’s Suhani’s dream to become a doctor. She urges Rakesh to tell what happened. Sudha again asks Rakesh how will Suhani become a doctor if she doesn’t study or give exams. She asks Rakesh to say what happened and also asks if he will allow Suhani to go to college?

Rakesh recalls Vikrant asking him to keep his daughter away from his son. Sudha repeats her questions. Rakesh gets frustrated with Sudha’s repeating questions and with recalling Vikrant’s harsh words. He slaps Sudha in frustration and anger. This shocks the whole family. He declares that Suhani won’t go to college from the next day. Kamini feels happy while others look shocked. Rakesh tells Suhani that she won’t keep a medical kit or stethoscope in her hands from the next day but rolling pin and broom. He orders her to get in the habit of wearing a saree instead of a doctor’s coat. Rakesh tells Suhani this is her future.

Suhani feels hurt hearing her father’s words. He doesn’t even let his mother question his decision. Rakesh says he listened a lot. He says he won’t listen to anyone now as it’s his final decision. Suhani feels broken and Rakesh goes to his room. Kamini and Nikki feel happy. Suhani and Ishaan run to the crying Sudha. They hug Sudha and share their pain. Suhani’s grandmother wonders if Rakesh got to know about what happened in Ranveer’s birthday party. She sees Kamini happy and angrily asks her can’t she hide even one thing? Suhani’s grandmother asks Kamini what was the need to tell Rakesh anything about the party?

Kamini swears at her mother and says she didn’t tell Rakesh anything. Suhani’s grandmother refuses to believe Kamini. She believes Kamini when Kamini swears on her beauty. Kamini reminds her mother that she was with her all the time and asks how could she reveal anything to Rakesh. She asks Sudha, Suhani and Ishaan why they are mourning so much as Rakesh would have got to know about it someday. On the other hand, Riya reaches Ranveer’s house and recalls Ranveer rejecting her at the party. Vikrant comes and tells Riya that he understands her heart break and his humiliation.

He tells Riya that he scolded and insulted Rakesh so much that he won’t even let Suhani get out of the house. Vikrant says he drifted Suhani from Ranveer’s life forever. Riya hugs and thanks Vikrant for keeping his promise. Vikrant tells Riya that he will make sure that only she will become his daughter in law as well as Ranveer’s wife. On the other hand, Raghav and John try to handle drunk Ranveer. They ask him to go home but he refuses. John asks Ranveer to go to the hostel instead. Ranveer refuses to go anywhere.

A man comes and says he knows where Ranveer wants to go. Ranveer calls the man super driver and asks him how is he? Raghav and John wonder who the man is? Man tells Ranveer that he will drop him to his destination. Ranveer tells the man that his destination is the reason for his present condition. He further says his destination (Suhani) banned him from going near her. Worried, John asks Raghav if Ranveer is thinking of going to Suhani’s house again? Raghav says Ranveer won’t go. Ranveer asks the cart driver (man) if he will save or push a girl falling in the pit. The cart man says he will save the girl. Ranveer asks what wrong thing he did?

The cart man says to Ranveer no he doesn’t get angry at all. Ranveer asks his friends to hear what cart man is saying. Ranveer asks someone to tell Suhani that he forgot dreaming since he saw her. John and Raghav smile. On the other side, Sudha tries to calm hurt and broken Suhani. Suhani apologizes to Sudha saying that Rakesh slapped her for the first time because of her. She hugs Sudha tightly and cries.

Reviewed Rating for Sirf Tum 6th January 2022 Written Update Suhani shatters: 4/5 This rating is solely based on the opinion of the writer. You may post your own take on the show in the comment section below.