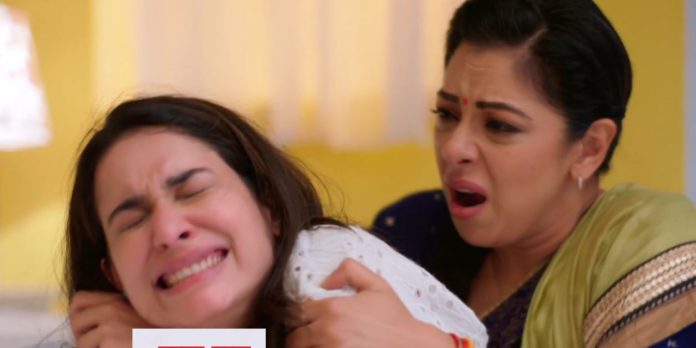 Anupama 7th January 2022 Written Update Terrified Malvika Anupama gets emotional talking to Malvika. She tells that she never saw the outside world, her family was her world, she got married to Vanraj on her 25th wedding anniversary, but her world got shattered when she found Vanraj cheating on her with Kavya. Anupama feels the same pain once again when she narrates the heartbreaking incident to Anuj and Malvika. She tells Malvika that the painful times of life don’t pass off easily. Anuj also cries seeing Anupama in tears. Anupama brings out the motivational connect by her saddening story. She tells that they shall come out of the pain to forget it, the only way is to move on. She convinces Malvika to move on in life. She asks Malvika to learn to smile even with tears in eyes.

Anupama becomes an inspiration for Malvika as well. Malvika agrees to celebrate the New years. Anuj is really happy seeing the way Anupama has handled his sister. Malvika catches the lovers lost into a moment. Shahs also celebrate the New years together. Anuj and Anupama find a couple fighting. Malvika gets scared seeing them. Anupama and Anuj find Malvika in the terrified state. Anuj reveals about Malvika’s depression. Anupama asks the reason for the pain. Anuj tells her that Malvika was into a bad marriage. He feels guilty to get Malvika married to an inhumane person. How will Anupama deal with this new issue? Keep reading.

Anuj wonders about Anupama and Malvika’s whereabouts. He thinks they told him that they would meet in the parking lot after office. Anuj sees Anupama and Malvika playing stapoo together and asks them what are they doing? Anupama jokes with Anuj and plays her turn. Malvika asks Anuj can’t he see that they are playing. Anuj asks them why they are playing all this outside the office? Anupama replies to Anuj that office stuff would break and moreover employees would not like to see them playing all this inside the office.

Malvika and Anupama give a high five to each other. Anuj asks them to shut up. He asks them whose idea was to play stapoo outside the office. Anuj further says he will pull their ear and then they will know. Malvika tells Anuj that he can pull Anupama’s ears only in any case. Anuj asks why? Malvika says there should be atleast one close moment between them. Anuj and Anupama feel shy and awkward. Malvika reveals to Anuj that this isn’t a game but a competition. Anuj asks what? Anupama asks Anuj to wait for some time. Anuj too feels like playing the game but feels shy thinking that if he gets caught, he will be in the front page of newspapers playing hopscotch (stapoo).

Anuj asks Anupama and Malvika to say what was the bet? Anupama and Malvika keep playing, ignoring Anuj. Malvika congratulates Anupama for winning the bet. She asks Anupama to say what she needs to do? Desperate Anuj asks what was the bet? Malvika reveals that the bet was that the loser would have to agree to one thing of the winner. She further tells Anuj that Anupama came out to be a pro and defeated her (hopscotch queen). Anupama acts like a queen/Malvika. Malvika tells Anupama, if she would have won, she would have asked her to marry her brother. Anuj and Anupama again get awkward. In his thoughts, Anuj calls Malvika an idiot and asks her why she didn’t win?

Malvika tells Anupama that she is firm about her words and doesn’t take a back step. Anupama requests Malvika to attend the New Year’s party this year. Anuj and Malvika get shocked. On the other hand, Samar indirectly thanks Kavya for provoking Nandini against the Shahs. Kavya defends herself. Samar says he heard everything as he came to give the New Year party’s invitation. Nandini tells Samar that Kavya is just concerned about her. Samar tells Nandini that Kavya is talking about breaking the house, is this a concern? Nandini tries to defend Kavya. Samar asks Nandini to explain what is the meaning of living separate from the family?

Samar reminds Nandini that Malvika is Anuj’s sister who did a lot for them. He continues reminding Nandini that Anuj saved his life, saved him from going to prison, saved her (Nandini) from Rohan and who saved their dance academy. Samar further reminds Nandini and Kavya that they still have their house only because of Anuj, otherwise Rakhi Dave would have taken its possession. Samar explains to Kavya and Nandini that Anuj and Anupama together handled broken Bapuji too. He asks can’t they let Malvika live in their house for some days knowing that she is so important for Vanraj’s career. He says Malvika will leave in some days as well as the issues of their house.

Samar says the environment of the house could change if they change themselves. Nandini tells Samar that Malvika is affecting Kavya’s married life. She asks Samar to understand that a wife would feel insecure if husband’s colleague comes to live in their house. Samar asks Nandini and Kavya if they didn’t think about the same thing when Kavya did all this. Samar tells them about Anupama’s pain. He apologizes to Kavya and tells her that she would have to reap what she sowed in present life only. Nandini requests Samar to not talk to Kavya like this as she is already worried. Samar tells Nandini that all of them are worried, not only Kavya and are thus dealing with their problems.

Samar tells Kavya that by increasing other’s problems she can’t reduce her own problems. He asks Kavya to focus and deal with her own problems rather than others. Samar asks Kavya if she can’t bring happiness in others life then at least don’t destroy others happiness. He tells Nandini if she thinks they are doing injustice to Kavya then she can decide if she wants to become Shah’s daughter in-law or not? Nandini and Kavya get shocked. Anupama explains to Malvika that some memories give pain in life, which can’t be forgotten. She shares the most painful memory of her life with Malvika.

On the other hand, Shahs are seen preparing for a New Year party. Vanraj comes with some new year gifts for his family. Shahs discuss who will come and who will not come from Kapadia’s for the New Year’s party. Malvika tells Anupama that she wants to try to face her fear once. Anuj feels happy thinking that Malvika will celebrate New Year after so many years only because of Anupama. Malvika goes to get ready. Anuj says,”I love you” to Anupama through sign language. He gives her a flower too. Malvika brings them out of their silent romance.

Malvika feels scared about leaving for the new year party. Anuj and Anupama put their arms in Malvika’s arms to give her the strength. Shahs are seen playing tambola. Shahs discuss why Anupama got late for the party. Kavya says Malvika must be creating a drama, leading to Anupama getting late. Malvika gets scared seeing a husband berating her wife outside the house. Neighbors and Anuj make them finish their fight. Anupama feels bad for the woman, who got berated. She thinks even rich people torture their house’s woman. Anuj and Anupama get shocked seeing a very scared Malvika.

In the next episode, Anupama and Anuj will get shocked to know that Malvika takes depression pills. Anuj will reveal to Anupama that he made the biggest mistake of his life by marrying Malvika to a disgusting man who tortured her and didn’t valued her consent. Anupama will try to handle a scared Malvika, requesting someone to not beat her as it pains her a lot.

Reviewed Rating for Anupama 7th January 2022 Written Update Terrified Malvika: 4/5 This rating is solely based on the opinion of the writer. You may post your own take on the show in the comment section below.