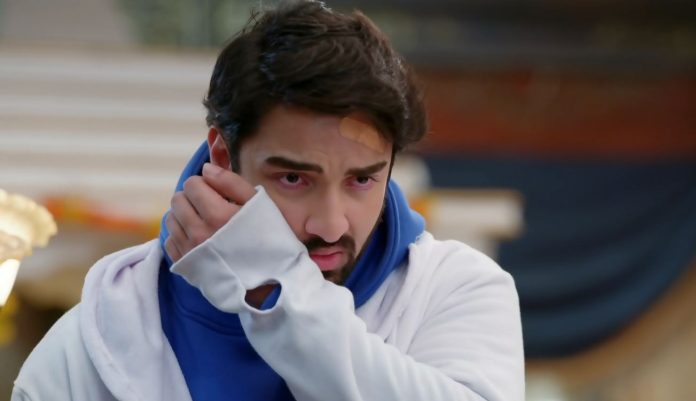 Bhagya Lakshmi 8th January 2022 Written Update Rishi slapped Lakshmi walks on the road lost. She reaches Rano’s house. She gets worried on meeting her sisters. She has to tell them that she broke her marriage. Lakshmi tells Shalu that Rishi really has an affair, he loves Malishka. She cries that Shalu was so right about Rishi, but she never believed this truth. Rano spies on them and hears the truth. Neelam asks Virender why didn’t he stop Lakshmi from leaving. He replies that Lakshmi’s decision was right. He tells that Rishi was married to Lakshmi, but he was going to marry Malishka. She tells that her son didn’t do anything wrong, everyone in the family chose Malishka, even Virender liked her.

Virender shouts that Malishka was his choice before, but now Lakshmi is his choice for his son. He yells at her. He tells Neelam that she had used him to trap Lakshmi and ruin her life. He accuses her for being so minded just about Rishi. Rishi and Malishka come home. They find a loud argument happening between Virender and Neelam. They learn that Lakshmi has left the house. Neelam rebukes Malishka for making a fun of relations. Rishi interrupts and gets a tight slap from Neelam. A new track will begin with Lakshmi and Rishi’s separation. Will Rishi fall in danger because of his Kundali dosh again? Keep reading.

Earlier in the show, Lakshmi asks Virender how will he fix the broken relation. She feels its too late, their lie has changed everything. Neelam asks Lakshmi to not leave the house, she is Rishi’s wife. She tells that they got Rishi married to Lakshmi for a reason. She adds that its important that Lakshmi stays with Rishi. Lakshmi tells that she doesn’t trust anyone, relations can’t be made by one person’s efforts. She regrets to say that Rishi broke the relation, she just ended it. Neelam asks Virender to stop Lakshmi. Lakshmi leaves the house.

Lakshmi decides to leave the house. She feels shattered when she recalls her Grahpravesh. She feels much pain in stepping out of the door. Neelam asks Virender to stop Lakshmi. He just wishes Lakshmi stays strong. Lakshmi breaks down with Rishi’s cheat. She misses Rishi and also his family. She feels they all cheated her by bounding her in an unwanted marriage. She remembers the times when Rishi lied to her. Neelam tells Virender that everyone knows the truth behind the marriage. She tells that she got a middle-class girl for Rishi and spent much money on the marriage, just because of Lakshmi’s Kundali, she accepted Lakshmi to save Rishi’s Markesh dosh.

She is worried that Rishi is still in danger. She doesn’t think anything is important than Rishi’s life. She gets angry on Lakshmi, who left the house and broke the marriage. She doesn’t think Rishi made a big mistake. She tells that Rishi and Malishka’s marriage would have not meant to them even if it completed. She asks Virender why didn’t he do a father’s duty towards Rishi and stop Lakshmi. She doesn’t care for Lakshmi. Virender tells that he didn’t stop Lakshmi because her decision was right.

He adds that he is with Lakshmi, he never thought that she will sound so selfish. He rebukes her for her selfishness. He calls her insensitive and senseless, who didn’t think of Lakshmi’s emotions. Neelam asks him to stop it. He tells that she failed in becoming a good mother, she didn’t give good values to Rishi, he is married to Lakshmi and still went to marry Malishka. She tells that even he liked Malishka. He tells that he liked her before, not now. He feels she has used him in ruining Lakshmi’s life.

He asks her how can she accept Rishi’s big mistake. Neelam tells that Lakshmi has emotionally trapped him by calling her Bau ji. He tells that he failed to become Lakshmi’s Bau ji, he failed in protecting her from sorrow. He adds that Rishi has given much wounds to Lakshmi. She tells that he hates his son because of Lakshmi. She asks him to understand the threat on Rishi’s life. She taunts him for not becoming a good husband and a good father. Virender accepts that she is right this time. He feels he isn’t a good person, he did so wrong with Lakshmi. She yells at him for always favoring Lakshmi.

He tells that he didn’t want Lakshmi to stay, they have already hurt Lakshmi a lot. He tells that he has no right to stop Lakshmi, who is broken up by the deceive. Rishi and Malishka come home and learn that Lakshmi left the house. He feels guilty that he has hurt Lakshmi so much. Dadi asks him does he realize his mistake now, when its too late. Rishi apologizes to Dadi and Virender. Virender doesn’t want to talk to Rishi and Malishka. Malishka faces the family’s wrath. Lakshmi returns to her aunt’s house with tears in her eyes. Neelam asks Malishka why did she do this.

Malishka states her insecurities. Neelam asks the reason for the cheat. She tells that Malishka lied to her many times. She angrily slaps Rishi. Lakshmi hugs her sisters and tells them that she left Rishi, she left the Oberoi house, because of Rishi’s cheat. She reveals Rishi and Malishka’s affair. Rano is shocked to know this. Neelam tells Rishi that she doesn’t care for Lakshmi’s sorrow, or the society’s taunts, she just worries for the family. She is hurt that Rishi lied to her. Lakshmi’s sisters console her.

Reviewed Rating for Bhagya Lakshmi 8th January 2022 Written Update Rishi slapped: 4/5 This rating is solely based on the opinion of the writer. You may post your own take on the show in the comment section below.