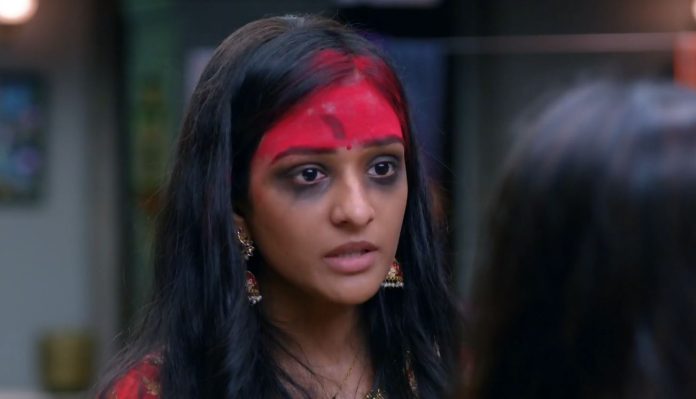 Bhagya Lakshmi 10th January 2022 Written Update Lakshmi’s decision Lakshmi tells Shalu about Rishi and Malishka, who were in love since ever, they were committed together much before Rishi got married to her/Lakshmi. She regrets that the entire family cheated her. She tells that everyone in the family knew this, even Virender was aware of the truth and kept it hidden. Rishi feels much guilty. He is restless in his room. He misses Lakshmi. He recalls her words. He sees the wedding picture in the frame and finds it torn. He realizes Lakshmi’s anger and feels sorry. Lakshmi tells Shalu that she can tolerate everything, but not deceive. For her, a relationship meant trust.

Earlier in the show, Neelam rebukes Malishka. Malishka states her insecurities. Neelam asks the reason for the cheat. She tells that Malishka lied to her many times. She angrily slaps Rishi. Lakshmi hugs her sisters and tells them that she left Rishi, she left the Oberoi house, because of Rishi’s cheat. She reveals Rishi and Malishka’s affair. Rano is shocked to know this. Neelam tells Rishi that she doesn’t care for Lakshmi’s sorrow, or the society’s taunts, she just worries for the family. She is hurt that Rishi lied to her. Lakshmi’s sisters console her.

Neelam tells that Rishi is the reason that Virender fought with her, and stopped talking to them. She tells Rishi that his life is in risk again that Lakshmi left. She adds that Lakshmi had gone out in storm to find him. Malishka asks Neelam not to regard Lakshmi a Devi. She lies that she had saved Rishi’s life from danger, when a pillar fell over him and he got stuck in fire. She asks Neelam why is she calling her love kiddish. She tells that Neelam can ask Rishi about it. Neelam asks Malishka did she save Rishi. Rishi tells that Malishka is saying the truth.

Malishka asks Neelam not to fear for Rishi’s Markesh Dosh. She claims that she saved Rishi’s life. Dadi feels the family has no conscience of their own, they lack humanity, they are selfish. She feels no one in the family have a sorrow that Lakshmi left the house. Rishi really has sorrowful tears for Lakshmi. Lakshmi tells Shalu that she had seen a nightmare that Rishi is going away from her, she didn’t know that she is actually getting the hints of the reality. She adds that Rishi was marrying Malishka, they had an affair much time before the marriage.

She feels Rishi made her life a big lie. She cries that she felt his fake emotions and fell in his love. She tells that the entire family knew about Rishi and Malishka’s love affair. Shalu gets angry knowing that Oberois cheated Lakshmi, knowing she doesn’t have her parents. She wants to go and confront Rishi. She tells that she will not spare Rishi. Shalu and Bani tell that they will seek an answer from Oberois for wronging Lakshmi and breaking her down. She wants their answer for Lakshmi’s tears. Rano looks at them. Lakshmi hugs her sisters. She tells that she is okay that she is back with her family.

She sounds fine to calm them. Neelam tells Karishma that they have to do something. Karishma tells that she will handle things. Malishka asks Rishi not to get upset. Malishka tells that she can’t see him crying. Ayush goes to shoulder Virender in sorrow. Virender tells Ayush that everything got over, Rishi cheated Lakshmi and also them. Ayush tells that even he didn’t expect that. He feels sorry for Lakshmi.

Virender asks him to find out if Lakshmi reached her aunt’s house. Ayush calls Shalu to find out about Lakshmi. Shalu vents anger on Ayush that he didn’t take care of Lakshmi knowing Rishi is cheating her. She tells that he also broke her faith. She asks him to never call back. Ayush tells Virender that Lakshmi reached her sisters. He consoles Virender. Neelam comes to talk to Virender, but he avoids her.

Karishma reaches Neelam. Neelam tells Karishma that she wants to stay alone for some time. Karishma goes away. Malishka tells Rishi that its actually good that the truth came out, the complications of lies will now subside. She asks him is he still worried for his wife Lakshmi. Rishi tells that Lakshmi is his friend, he is worried for her. Malishka makes him promise that he will always listen to her. Ayush informs him that Lakshmi reached home and she is with her sisters now. He adds that Shalu is very mad at him. Rishi goes to his room to stay alone for some time. Ayush feels sorry that he couldn’t help Lakshmi with the truth.

Rano gives the shocking news to Neha. She is happy that Lakshmi’s marriage broke. Mama ji overhears them and rushes to meet Lakshmi. He tells that Rishi has done wrong with Lakshmi, he will take an answer from Rishi for the deceive. He meets Lakshmi and consoles her. He tells her that she need not worry, he is still alive to help her. Rano tells them that she isn’t dead, she runs the house and manages the expenses with difficulty. She doesn’t want more burden on herself. She argues with her husband.

She asks Lakshmi to go back to her Sasural. Lakshmi doesn’t want to go back to Rishi. She tells that Rishi’s affair doesn’t matter, it happens, but a marriage doesn’t break. She threatens to throw out Shalu and Bani also. Mama ji begs Rano to not do the worse. Rano spares Lakshmi on his request. She tells that she will not throw out Lakshmi at night, but she will take her to Rishi’s house in the morning. Lakshmi and Rishi miss each other. They think of each other.

Reviewed Rating for Bhagya Lakshmi 10th January 2022 Written Update Lakshmi’s decision: 4/5 This rating is solely based on the opinion of the writer. You may post your own take on the show in the comment section below.