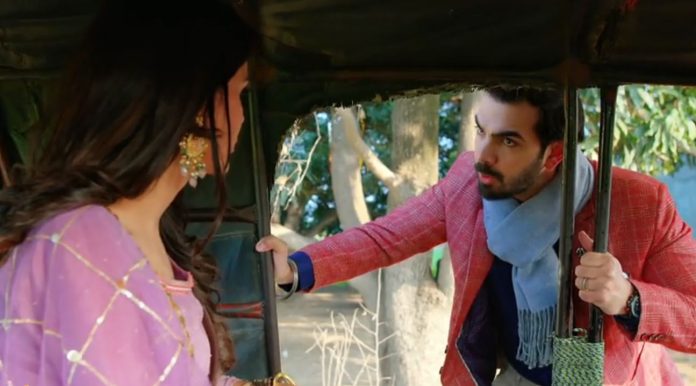 Udaariyaan 8th January 2022 Written Update Angad warns Tejo Angad meets Tejo at Sandhu house. She tries to avoid him and go away. He stops her and tells her that he is giving her a last chance to leave everything and come with him. Tejo asks him to not worry for her and let her freely live her life. He tells her that she will never forget this day when she rejected his love, she will very soon regret for it. Tejo doesn’t listen to him. He doesn’t let her go on her scooty. She hires an auto rickshaw and leaves for college. Angad angrily screams. He warns her of facing dire consequences. Later, at night, Angad is seen plotting an accident. Is that Tejo or Jasmin to plan her entry back in Sandhu house? Keep reading.

Earlier in the show, Fateh wishes Khushbeer forgives Rupy. Even Tejo attempts to make Rupy calm and make him forgive Khushbeer for the fight. She tells that Khushbeer is right on his front and they shall apologize to him. Rupy doesn’t want to apologize. He feels he didn’t do anything wrong. Fateh and Tejo attempt to unite their family back. Simran feels guilty that she is the reason for all this clash.

Later, Tejo meets Khushbeer and apologizes to him on Rupy’s behalf. He asks her to just forgive Fateh if possible, then all the complications between their families ties will end. He tells her that he wants to see her with Fateh. Tejo doesn’t think this is possible. He requests her to forgive Fateh. Angad returns in her life. What twists will Angad bring now? Keep reading.

Tejo tells Khushbeer that she can’t forgive Fateh ever, because his mistakes are too big to be forgiven. This reply hurts Khushbeer’s heart. He was hoping Fateh and Tejo to unite. He doesn’t tell her anything further. Fateh spots her at the Gurudwara and finds her crying. He asks her the reason. He asks her if she is crying because of Khushbeer’s words. She tells him that her dad kept his word and the secret, and now he has to keep Rupy’s word and stay away from her. Fateh tells her that he respects her dad, but can’t stay away from her, else he will stop living his life again.

He tells her that he can’t see her crying, he wants to live with her, he wants her back, because she is his life. He confesses his feelings to her, which reach her heart. His confession makes her speechless. He asks for the rights to stay close to her in order to live. Tejo goes home and gets a shocker when she finds Angad bonding with her family. She doesn’t want Angad to weave any false hopes in her family’s mind. She wonders what is Angad doing and why. Angad behaves normal with her in front of everyone, and the family seems happy. Tejo doesn’t want Angad to dream of their union. She has already refused to his love.

Angad gets after her with the same love confession and expectations. He asks her to accept his love, its a last chance for her to come back to him. Tejo still refuses to him. Angad sternly warns her that the day will be worse for her, she will deeply regret the refusal. Tejo doesn’t care for his madness. She can’t love Angad ever. She doesn’t want to make any false commitment. She hopes Angad understands her decision. She isn’t aware of Angad’s obsession yet. Angad plans the worse.

Tejo doesn’t fall in Angad’s words and leaves for the college. Angad tells that she is forcing him to join hands with evil Jasmin, which he didn’t wish to do. Meanwhile, Fateh also reaches the college with a hope to meet Tejo and gift her roses. He thinks Tejo will get angry seeing him, so its better to keep the roses on her desk before she comes. He gets shocked seeing Jasmin in the college. He follows her to know her intentions. He meets her and asks her the reason that she is again running after Tejo for revenge. He warns her to stay away from Tejo and him. He also clears that she can never win his love.

He asks Jasmin to just spare them. Jasmin tells him that she is really here for revenge, she isn’t interested in him but in destroying his love life with Tejo. She exhibits her intentions clearly to him. He gets worried when she talks about her big surprise coming to shock him. He doesn’t want her to harm Tejo. She takes the roses from him to crush and leaves him frustrated. He rushes to see Tejo if she is okay or not. He finds Tejo taking an extra class for the weak students who failed in the exams last time. He doesn’t want to leave Tejo alone in the college after work hours, knowing Jasmin is around to target Tejo anytime.

He stays there as Tejo’s protector. Tejo learns about Fateh’s presence and help. She doesn’t mind his presence, which gives him a positive hope that she will soon forgive him. Angad meets Jasmin, and tells that he is helpless to join hands with her because of Tejo’s refusal. She asks him to help her in her planning which will leave the entire family shocked. She wants Fateh and Tejo to get a heavy dose of drama. She tells Angad that she has planned an accident which he has to get executed. He tells her that even he has planned to surprise Tejo and her family. Both of them get wicked to get their goals fulfilled. How will Angad and Jasmin break apart Fateh and Tejo’s relation? Keep reading.

Reviewed Rating for Udaariyaan 8th January 2022 Written Update Angad warns Tejo: 4/5 This rating is solely based on the opinion of the writer. You may post your own take on the show in the comment section below.