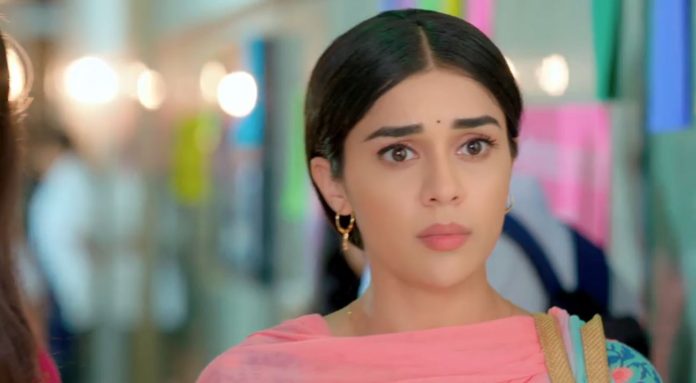 Sirf Tum 10th January 2022 Written Update Shocker for Suhani Ansh congratulates Riya. He tells her that he is very happy for her. Ansh also says to Riya that at last she got what she wished for. Riya thanks Ansh and tells him that Vikrant would not have been able to fulfill his promise without his help. She also says that she is glad that their plan worked out. At the same time, Sudha and Suhani reach college through auto. This shocks Ansh and Riya. Sudha wishes Suhani, “All the best” for her exam. Suhani thanks Sudha.

Both mother and daughter say bye to each other. Ansh and Riya stand shocked. They feel angry and think how this happened? Suhani’s another friend meets her and tells her that she was waiting for her for a long time. She tells Suhani that there is still some time left for the exam to commence and thus they should study. Suhani agrees and goes with her friend to study. Riya thinks about how Suhani got the courage to go against Rakesh? She makes a call to Rakesh. Rakesh asks Riya to call later as he is busy. Riya tells Rakesh that she wants to talk about something important.

Rakesh gives angry expressions while talking to Riya. Suhani and her friend reach their classroom. Their professor asks them to sit as the exam will commence in some time. Rakesh almost reaches Suhani’s college and recalls Vikrant’s taunts and ugly allegations. He also recalls that yesterday he ordered Suhani that she will not attend college now. Rakesh also recalls how he slapped Sudha when she questioned his decision. He parks the bike and reaches Suhani’s classroom. Rakesh screams Suhani’s name and everyone present looks at him. Professor asks Rakesh who he is?

Rakesh replies that he is Suhani’s father and wants to talk to her about something important. Professor tells Rakesh that parents can’t enter class like this. He asks Rakesh to go outside. Rakesh asks Professor to send Suhani outside with him as it’s something very urgent. Professor asks Rakesh to talk to Suhani after the exam. Rakesh again makes a request to the professor and says it’s urgent. He also signs Suhani to support him. Suhani requests the Professor to give her two minutes. Professor tells Suhani that the college can’t allow this. Suhani requests the professor again.

Ranveer too stares at Rakesh angrily and says Suhani will return to her class only to give her exam. He says he will see who stops Suhani from giving her exam. While Rakesh and Ranveer give each other an angry glare, Suhani feels shocked by Ranveer’s support towards her. Rakesh tries to leave with Suhani but Ranveer stops them, extending his arm on their way. Rakesh and Suhani feel shocked. Ranveer asks Rakesh which father can sleep peacefully by snatching his child’s dream. Rakesh tells Ranveer a dream which becomes an embarrassment for home and family, should be broken for good.

Ranveer asks Suhani to return to the classroom and write her exam. Suhani notices Ranveer getting angrier and fears that he may lose his control. She recalls how angry Ranveer beat Rishi and Ansh badly. Suhani also recalls how Ranveer grabbed his father’s collar in anger on his birthday. She notices Ranveer’s fist folded in anger. Ranveer folds his hands in front of Rakesh, Suhani gets shocked noticing it. Ranveer tells Rakesh he never learnt to fold hands as he was never required to do it. He tells Rakesh that he always achieved his rights or likes by snatching them. Ranveer tells Rakesh that whatever he achieved, achieved by himself.

He further begs Rakesh for Suhani’s dreams by folding his hands in front of Rakesh. Ranveer requests Rakesh to let Suhani give her exams. He tells Rakesh that he has witnessed only two emotions in Suhani’s eyes till now. Ranveer says first, Suhani is obstinate to become a doctor and secondly a responsibility to keep her father’s head held high always. He also tells Rakesh that no one has the right to break Suhani’s dreams, not even him. Ranveer requests Rakesh again. Professor comes and angrily asks Suhani to return and give her exam, otherwise she won’t be allowed to give her exam afterwards. Suhani gets tense with the situation.

Other college students discuss and wonder why Suhani’s father isn’t letting her give exams. Another student calls Suhani’s family dramatic. Rakesh hears it and leaves Suhani’s hand. This action of Rakesh surprises Suhani. Ranveer asks Suhani to go and give the exam and not waste her time. He wishes her “All the best”. Rakesh also gives Suhani the permission to give her exam. Suhani turns and returns. Ranveer thanks Rakesh and turns to leave. Rakesh stops him and tells that he made a big mistake by giving Suhani’s responsibility to him.

Ranveer asks Rakesh if Vikrant said anything to him? Rakesh continuously coughs. Ranveer goes to get water for Rakesh. Rakesh’s health worsens and he faints. Students run to him. Raghav, John and Ranveer too run towards Rakesh. Ansh’s friends see fainted Rakesh and think that he got a heart attack. Ranveer and his friends take Rakesh to the operation room. They examine him. Ranveer calls the cardiologist of his college and asks his help for Rakesh. Cardiologist asks Ranveer to monitor Rakesh’s ECG till he arrives. Ansh overhears Ranveer’s conversation.

Suhani comes out giving her exam. She tells Nita that she is very tense. Nita asks Suhani to not worry and go and ask. Suhani’s college mate informs Suhani that Rakesh got a heart attack and is taken to the emergency ward. Shocked, Suhani runs to see her father. Nita runs behind Suhani. Ranveer feels tense as Rakesh is not getting conscious. A student brings Rakesh’s bag inside Rakesh’s ward. Ranveer gets Rakesh’s resignation letter and reads it. He gets shocked and angry to know that Vikrant questioned Suhani’s upbringing, which led to Rakesh’s worsen health and unfair decisions.

Ranveer leaves by asking his friends to take care of Rakesh as he is going to bring treatment for Rakesh’s worsen health. He fails to notice Ansh outside Rakesh’s ward. Ansh enters Rakesh’s ward. He gives Rakesh’s reports to the Cardiologist. Raghav and John go outside to inform Ranveer that the doctor has arrived. Suhani runs towards Rakesh’s ward.

Reviewed Rating for Sirf Tum 10th January 2022 Written Update Shocker for Suhani: 3/5 This rating is solely based on the opinion of the writer. You may post your own take on the show in the comment section below.