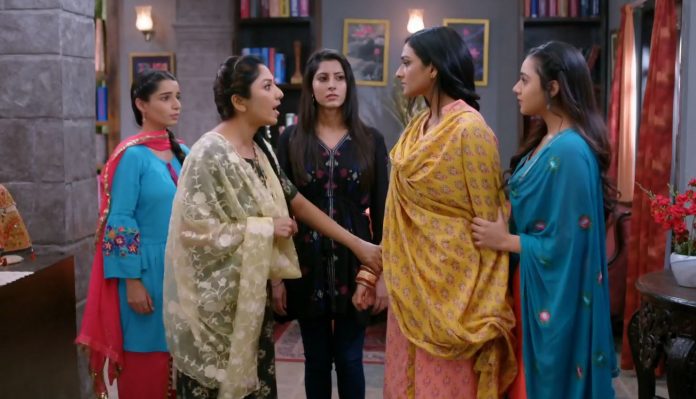 Bhagya Lakshmi 11th January 2022 Written Update New Start Rishi is in guilt over Lakshmi’s leaving. Lakshmi tells her sisters that relationship means faith to her, and deceive means the relationship’s end. She tells that Rishi broke her faith, now her relation with Rishi is over. Guru ji arrives home to meet Neelam. Neelam tells him everything that happened. She tells that Lakshmi left the house and also broke the marriage. Guru ji asks her to call back Lakshmi home, if Lakshmi isn’t with Rishi, then the Markesh dosh will start overpowering Rishi’s stars. He tells the new threat on Rishi’s life. He tells Neelam that Rishi is in danger today, he will be under risk because of iron.

Earlier in the show, Lakshmi doesn’t want to go back to Rishi. Rano tells that Rishi’s affair doesn’t matter, it happens, but a marriage doesn’t break. She threatens to throw out Shalu and Bani also. Mama ji begs Rano to not do the worse. Rano spares Lakshmi on his request. She tells that she will not throw out Lakshmi at night, but she will take her to Rishi’s house in the morning. Lakshmi and Rishi miss each other. They think of each other.

Shalu does the aid to Lakshmi’s injured foot. Lakshmi is heartbroken. She thinks of Rishi’s words. Shalu cries seeing Lakshmi. Rishi misses Lakshmi. Bani and Shalu share their pain. Lakshmi gets Rishi’s call. She doesn’t answer his calls. She remembers her promise to her dad. She goes to console her sisters. She tells that she can tolerate anything, but not deceive, which ends the relations completely. She tells that she has no relation with Rishi now. She pretends to be strong. She asks them not to get sorrowful. She tells that they shall get positive that the truth came out. She doesn’t want to cry for Rishi anymore. She hugs her sisters. Rano wakes up. She tells Neha that she has to take Lakshmi to the Oberoi mansion.

Neha asks her not to delay and catch Lakshmi. Rishi wakes up and misses Lakshmi. He thinks of their moments. He cries for Lakshmi. Rano asks Lakshmi to go back to Oberoi mansion. Lakshmi refuses. She tells that she will do a job and give money to Rano. She asks Rano not to oust her sisters from the house. Ayush meets Rishi. He asks Rishi if he had called Lakshmi to know how is she. Rishi tells that he was so broken down when he saw Lakshmi is in danger.

He tells Ayush that he was searching for Lakshmi madly, when he reached Lakshmi at the temple, Lakshmi yelled at him a lot, it was justified, he didn’t say a word to her, he scolded Malishka instead. He tells that Neelam has slapped him and Virender also punished him, even Ayush is fighting with him. He asks is he such a bad person. He wants his family to think about him as well. Lakshmi tries to strike a deal with Rano. Lakshmi tells Neha that she will give the rent and also separate money for the food. Neha and Rano agree to accept the money. Lakshmi tells that she will arrange money and give it to them.

She adds that she has gotten over her sorrow and picked up the courage, a new morning has come for her because of her supportive sisters. Mama ji overhears them. Rano gives two days to Lakshmi to find a good job. Lakshmi tells that she can’t waste more time on the arguments. Rishi wants Lakshmi and family to know his point of view. He asks Ayush did he force the family to get him married to Lakshmi. He feels everyone is treating him like a devil. He asks Ayush to give his opinion. He asks Ayush to tell him where he went wrong, he wanted to tell the truth to Lakshmi. Ayush loves him. He tells that Rishi didn’t lose anything, neither his house nor his house, he wasn’t cheated like Lakshmi got cheated.

He tells that his marriage with Malishka was his decision, he could have waited for a year. He calls Rishi wrong. Rishi tells that he is the culprit, he will ask the entire family to beat him. He wants to tell the family about his emotions. Shalu gives the best wishes to Lakshmi when the latter is leaving for the interview. Lakshmi misses her dad. Ayush asks Rishi to understand Lakshmi’s feelings. Rishi tells that he didn’t know Lakshmi will see him marrying Malishka. He regrets that Lakshmi got cheated. He calls Lakshmi wrong that she didn’t listen to his side of story once.

Reviewed Rating for Bhagya Lakshmi 11th January 2022 Written Update New Start: 4/5 This rating is solely based on the opinion of the writer. You may post your own take on the show in the comment section below.