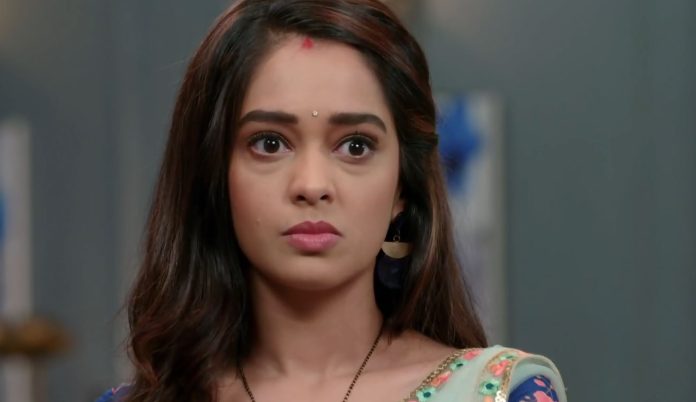 Kumkum Bhagya 11th January 2022 Written Update Confident attack Prachi tells Shahana that Rhea wants to oust her from her own house. She adds that Kohli house also belongs to her, she is a part of the Kohli family because she is Ranbir’s wife. She tells that she will throw out Rhea and not let her settle down in the house. She tells that today Rhea has won, but tomorrow it will be her day, she will win. She affirms that she will oust Rhea and give her a permanent defeat.

Shahana feels happy hearing Prachi’s confident words. Prachi and Shahana take the disguise of the IT officers and arrive home to trouble the family. They didn’t expect Vikram to be home at that time. Prachi looks for help to stop Vikram from questioning them further. Prachi tries hard to ignore the family’s smart questions and rushes to Rhea’s room. Will she get the papers to save her marriage? Keep reading.

Earlier in the show, Prachi tells that she will execute Dida’s plan. Dida tells that they shall start the plan after Ranbir leaves for office. Shahana asks Prachi isn’t she feeling lonely in her pregnancy. Prachi tells that the baby is her strength, she doesn’t feel lonely at all. Prachi misses Ranbir. She wishes he was with her. Ranbir arrives home from the office. He finds Prachi crying and goes to wipe her tears.

Prachi clearly mentions that she doesn’t want Ranbir. She tells that she doesn’t want to talk to him. He tells that he worries for her. She is hurt by his fake concern, which he pretends deliberately. He tells that he won’t do anything to show concern to her if she is hurt. He asks her to go and do whatever she wants to. Shahana watches their fight. She asks Prachi why did she do this. Ranbir wanted to know the reason of Prachi’s sorrow. Prachi tells that Ranbir has given her the pain, she can’t forget the painful past. She asks why did Ranbir marry Rhea when he wanted to support her.

Ranbir tells that he will do everything as Prachi tells him, but only when she comes back to him. Prachi doesn’t want to fall into his deceiving innocent face. She tells that she is hurt by Ranbir’s mistakes. She cries that she is married to Ranbir, but she is alone, even her baby is alone, she wants Ranbir to bond with the baby, but she can’t do anything because of Rhea. She tells that the baby could have united Ranbir and her, but Rhea is the problem between them. She tells that this truth has broken her, she isn’t just a loving wife, but a strong mother who can do anything for the baby. She doesn’t want to forgive Ranbir who made the baby alone in the world.

Ranbir tells the family about his delayed meeting. Dida wants him to go to the office, else he will not let the fake IT officers enter the house. She asks him to get her jewellery. Rhea tells that she feels like Dida is forcing Ranbir to leave the house. Vikram agrees with Rhea. He asks Dida what’s the matter. Dida asks Ranbir to just go, she is already having a headache. Ranbir tells Dida that he will get her medicines. Vikram asks about Prachi, who always dines with them. Aaliya and Rhea don’t want Vikram to support Prachi. Rhea tells that Prachi would have gone to a temple to pray.

Ranbir goes to his room to get medicines. He doesn’t find Prachi there. He thinks to not call her and give her space. He gives the medicines to Dida. Prachi and Shahana wait for Ranbir to leave. Ranbir tells Rhea that he is thinking to go to office. He doesn’t want to ask Dida about Prachi directly. He leaves for office. Dida is relieved that he left. She wants Vikram to leave as well. Vikram tells that he will stay at home today, he isn’t feeling well. Dida wonders how will the fake raid happen in Vikram’s presence. Prachi and Shahana hide from Ranbir. Prachi tells that its time for action.

Pallavi asks Vikram didn’t he go to office. He tells that he will go if she wants. She asks if he has a bad mood. Dida tells that strange things happen. Prachi and Shahana enter the house without answering Rhea. Prachi tells that they are from the IT to raid the house. This brings Kohlis in tension. Dida likes their perfect drama. Prachi questions Vikram about the fake companies set up he planned to cover the black money. She tells that they will check the house well. Rhea tells that she doubts them and their identities. She asks them about their team. Prachi asks Rhea what problem she has with the raid. Prachi and Shahana make a blunder because of overacting.

Prachi tells that they have all the family members details. She asks them to give the phones. Aaliya refuses. Dida asks them to let them do the work and leave. She tells that they are innocent and need not worry. Vikram agrees with Dida. Prachi answers Rhea well. Prachi and Shahana get convincing with their drama. Vikram tells that he will come with them. Dida tells that she has no problem to show the house. Prachi asks Shahana to check Rhea’s room first, because she looks corrupt. Dida asks Prachi and Rhea to end their personal fights. She tells that they shall cooperate. She asks Rhea to keep quiet until the raid ends. Dida wishes Prachi gets the papers easily. Rhea tells Aaliya that something is fishy.

Reviewed Rating for Kumkum Bhagya 11th January 2022 Written Update Confident attack: 4/5 This rating is solely based on the opinion of the writer. You may post your own take on the show in the comment section below.