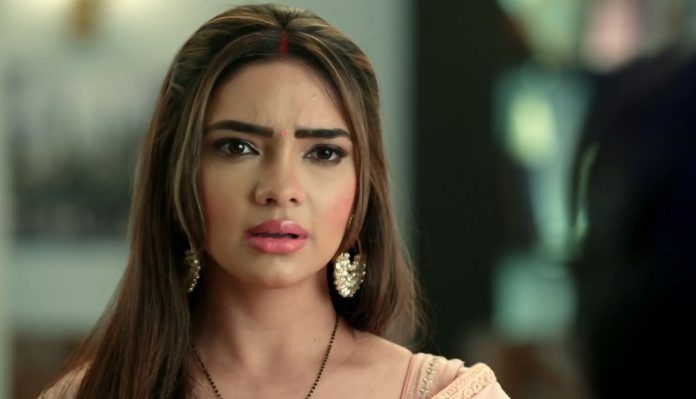 Kumkum Bhagya 12th January 2022 Written Update Rhea alert Dida stops Rhea from going after Prachi. She tells that she has given the raid idea, she is responsible behind the raid in the house. Rhea asks Dida what is she saying, how can she go against the family. Dida distracts Rhea who was doubting Prachi and Shahana. She doesn’t want Rhea to realize Prachi’s plans. Prachi and Shahana barge into Rhea’s room to get the guilt admittance papers. Vikram stays with them. Vikram gets to see Prachi’s fake beard coming off. He calls out Prachi. Prachi gets the papers and leaves from the room.

She tells Rhea that she got what she wanted. Prachi fixes the beard back. Vikram doesn’t reveal the truth about Prachi’s plan, since he thinks Rhea has done wrong with Prachi. Rhea stops Prachi and Shahana from leaving. Rhea tells that she has something to say. Prachi grows worried. Will Rhea catch Prachi and get the papers back? Keep reading.

Earlier in the show, Prachi tells Kohlis that she has all the family members details. She asks them to give the phones. Aaliya refuses. Dida asks them to let them do the work and leave. She tells that they are innocent and need not worry. Vikram agrees with Dida. Prachi answers Rhea well. Prachi and Shahana get convincing with their drama. Vikram tells that he will come with them. Dida tells that she has no problem to show the house. Prachi asks Shahana to check Rhea’s room first, because she looks corrupt. Dida asks Prachi and Rhea to end their personal fights. She tells that they shall cooperate. She asks Rhea to keep quiet until the raid ends. Dida wishes Prachi gets the papers easily. Rhea tells Aaliya that something is fishy.

Ranbir tells that he loves Prachi, he didn’t wish to marry Rhea, who was threatening to commit suicide. He tells that he had no option, he wanted to save the family. He tells that its his bad fate that Prachi came home on the day when he was marrying Rhea, Prachi had dreams and hopes in eyes, but it shattered seeing her husband with Rhea. He feels she changed a lot, she wants her rights and claims the relation, but she doesn’t want her husband. He knows she is very angry. He decides to go away from Prachi, who doesn’t want to see him. He tells that he is leaving for London tonight, his family also doesn’t care for him, Prachi will be happy for his leaving. Vikram and Pallavi show the rooms to Prachi and Shahana.

Rhea stays stressed. Dida asks Rhea to sit calm for some time. Rhea asks Dida why is she so relaxed. Dida tells that she can’t help any way. She asks Rhea why should they get scared if they have no black money. She calls Rhea wrong. Aaliya defends her niece. Dida wants to keep them engaged in talks. She tells that maybe someone informed the IT officers about Aaliya hiding the black money in Kohli house. Aaliya tells that she will never do this. Rhea asks Dida to use her mind. Dida tells them that she wants to tell them something, this IT raid idea was of her. Rhea and Aaliya can’t believe it.

Vikram shows the last room to Prachi. Pallavi tells that there is nothing hidden in her room. Shahana tells that checking is important. Rhea and Aaliya ask Dida to tell them clearly. Dida tells a story. She tells that she was speaking to her friends, she boasted that she is super rich and has much cash kept at home, maybe one of her friend sent the IT officers. Rhea asks Dida why did she tell that to her friends. She goes to see. Dida asks Rhea to stop. Prachi opens Rhea’s cupboard. She asks Vikram for the keys. He tells that he doesn’t know about the keys. He asks her to try to open the locker if she can.

Aaliya checks the landline and realizes its working. She tells that the IT officers are surely fake. Vikram sees Prachi’s fake beard coming off. He recognizes her. He finds Rhea coming to the room. Prachi fixes the beard. Dida asks Rhea to listen to her. She thinks Vikram got to know about Prachi. She wishes he doesn’t tell everyone. Rhea asks Prachi what is she doing. Prachi tells that she is checking the room. Rhea tells that there is nothing in the room. Prachi asks for the locker keys. Rhea asks why does she want the keys. Prachi tells that all the rooms are checked well.

She threatens to break the locker. Vikram asks Rhea to give the keys and end the raid. Rhea tells that she isn’t convinced with the raid. Prachi asks her not to get scared if she isn’t wrong. Rhea passes the keys. Prachi asks her to get out. Rhea tells that she is doubting the IT officers. Shahana answers Rhea. She asks Rhea is she a thief. She threatens Rhea of arrest. Aaliya asks Rhea to come with her. Dida asks Prachi to just rush and find the papers. Vikram realizes that Prachi is replying Rhea’s fraud her way. He lies to Pallavi. She demands to know the truth.

Prachi and Shahana get the papers. They are glad that their mission completed. Vikram swears that he is saying the truth. Pallavi compels him. Dida tells her that he won’t be able to tell her the truth. She also lies saying that Vikram is thinking of a wedding anniversary gift for Pallavi. She tells that Vikram is planning a surprise, they shall have a big party at home. Pallavi thanks her for being so thoughtful. Aaliya asks Pallavi to come with her. Dida tells Vikram that she will always save him from his wife.

She tells that she is happy that he is helping Prachi, because he believes that Prachi is the real bahu of the house. He tells that he wanted Rhea to become his bahu, but he is supporting the truth, Rhea has wronged Prachi so he wants to do justice with the latter. She wants him to get Prachi her rights. She feels proud of him. Prachi tells Shahana that something is really wrong, they should leave. Shahana returns the mobile phones. She tells that they are leaving. Rhea stops them to confront.

Reviewed Rating for Kumkum Bhagya 12th January 2022 Written Update Rhea alert: 4/5 This rating is solely based on the opinion of the writer. You may post your own take on the show in the comment section below.