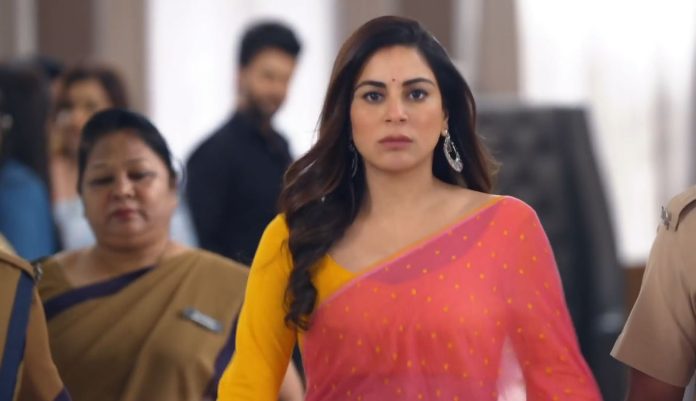 Kundali Bhagya 12th January 2022 Written Update Preeta’s arrest Prithvi and Naagre conspire to get Preeta out of their way. Naagre yells at Preeta and deliberately provokes her. He makes a plan to get her arrested. He tells her that he will see how she makes his client Prithvi leave the Luthra mansion. He goes close towards Preeta while shouting on her, which makes her react and push him away. Preeta asks him how dare he misbehaves with her. Prithvi watches the drama. Naagre acts hurt on his forehead. He rebukes Preeta for intentionally hurting him with an evil motive. Naagre calls the police at the same time. He asks the Inspector to arrest Preeta, who tried to kill him.

He poses attempt to murder charges on Preeta. Prithvi smiles watching Preeta’s arrest. Preeta falls helpless when Naagre cleverly frames her. The police arrests Preeta and takes her out of the Luthra mansion. Naagre keeps his word to Prithvi. The duo rejoice on their victory. Rakhi sheds tears seeing Preeta leave. Who will come to Preeta’s rescue this time? Keep reading.

Earlier in the show, Preeta tells Karan that her rules will run in her house. She asks Karan to become the famous cricketer again and earn his name back, if he can’t handle the business well. She tells him that if he becomes a popular cricketer again, then the business loss will be settled even. Karan accepts her word when she calls it her final decision. She asks him to focus on the work which he does the best. She tells that she will be convinced if he becomes a famous personality again. He asks her does she miss him. She asks him to leave. She wants to bring back the old Karan Luthra. She wishes she could tell her emotions to Karan. She thinks to behave sternly with Karan for his betterment.

Karan gets angry on Preeta for bossing him around. Sameer asks him why is he so upset. Karan tells that he doesn’t want to tell him. He collides with Natasha, who falls in his arms and thanks him for help. Karan vents anger on Natasha. He asks her will they just hold each other on stumbling, then she will ask him to become a famous cricketer. Natasha asks him what is he saying. He goes away. Sameer tells her that Karan vented Preeta’s anger on her. He goes after Karan. Naagre asks Prithvi is he sure that Preeta will do as they want. Prithvi tells that he knows how to get rid of Preeta.

Naagre asks him to come right away, they will throw out Preeta from the house. Prithvi calls someone. Kareena returns home after visiting her friend. Kritika updates her about Preeta and Naagre’s fight. Preeta asks Sherlyn about Naagre. Sherlyn tells that she isn’t Preeta’s personal secretary. Preeta tells that Sherlyn isn’t qualified to become her secretary. Sherlyn asks her to shut up and respect their relations. Kareena asks Sherlyn not to expect anything from Preeta who has come for money, not for relations. She praises Preeta for her amazing way to control Naagre.

She asks Sherlyn if she has love for someone, if yes, then who is that person. Sherlyn gets tensed. Preeta asks her why did she get so tense to name the family member she loves. Sherlyn argues with her. Preeta commands her to go and cook food for everyone. She instructs Sherlyn to cook everyone’s favorite food. She tells that she doesn’t care for everyone, but she wants them to have healthy food, if anyone falls sick, then it will be another problem. She tells that everyone will just have healthy food. Naagre appears in front of Preeta. She asks him didn’t he leave by now. She tells that he is a special guest. She asks if he likes the tea made by Sherlyn.

He tells that he liked the idea, but she won’t like what he is going to do now. Preeta yells at Naagre and asks him to speak less, because a tongue is sharper than a sword. Prithvi arrives to warn Preeta. He asks her to take every step carefully. She asks him to stop interfering between their talk. He tells that everyone knows her motive for coming, its her need for money, she didn’t come for her relations. She asks him to be silent and get grateful to her that she didn’t throw him out till now.

Prithvi tells Preeta that she can’t cause any harm to her. She tells him that he can’t challenge her, she can totally harm him and his position in the house. She adds that she isn’t spoiling anything because its her decision, she can ruin his attitude anytime she wants. She tells him that she is waiting for the bad time to deal with a bad person. He calls it a good excuse. He laughs at her who isn’t capable to remove him from the house. He tells that she is seeing his evil, even then she isn’t able to do anything. He confesses that he has caged Mahesh in the basement, she is hurt, but she has no power to throw him out. He provokes her purposely.

He tells that he will kick out Karan from the office, Karan is spying on him, this won’t be tolerated. Preeta breaks her silence. She asks Prithvi to get out of the house. Naagre asks Preeta how dare she misbehaves with his client. Prithvi tells that nobody can throw him out. Naagre holds Preeta to anger her. She pushes him away. Naagre gets hurt as per his plan. He tells Prithvi that his head is spinning, he isn’t feeling okay. Prithvi asks Preeta how dare she hurts his lawyer. Preeta tells that she was just making Naagre step back. Kareena calls it Preeta’s drama.

Preeta tells Naagre that she is a doctor, she can do the aid. Naagre asks her to stay away. Prithvi asks Preeta to pay a big price for the attack on Naagre. The police arrives to arrest Preeta on the charges of attempt to murder. Preeta asks Naagre did he go mad. Naagre asks Inspector to arrest Preeta right away. Preeta defends that Naagre was trying to touch her, so she moved him away. Rakhi tells Naagre that Preeta didn’t try to kill him, she moved him away to keep him at a distance. Prithvi tells that Rakhi has testified it that Preeta has pushed Naagre.

Rakhi tells that she didn’t mean to say against Preeta, who reacted to protect herself from a stranger. She tells the police that Preeta didn’t try to kill Naagre, there is a difference in pushing or killing a person. Naagre tells that any person can get a heart attack by a forceful push. Preeta asks Rakhi not to worry. She tells that she didn’t do any crime. Naagre asks her to go to court and prove it. She agrees to go to the court. Prithvi asks Inspector to arrest Preeta.

Preeta tells that there isn’t a need of handcuffs, she will go with the police. Preeta gets arrested, while Rakhi cries for her. Kareena stops Rakhi back. Naagre also makes a leave. Prithvi tells the family that Preeta doesn’t exist in the family, just he will be ruling over them. He threatens them about Mahesh. He commands them. Kareena madly affirms that she is glad on Preeta’s arrest. She thinks they all can live in peace now. Sameer asks Karan why is he so upset, if he had a fight with Preeta. Karan tells that Preeta blamed him for bringing losses for the business, she asked him to become the famous cricketer once again. Sameer smiles hearing his complains. Karan asks if he is also angry.

Sameer reminds that even Rishabh used to say the same to him. Karan tells that he never felt bad of Rishabh’s words, but he will not follow Preeta. Sameer asks him to vent out the frustration. Karan goes home to meet Preeta. Naagre stops the police. He tells Preeta that she would know the truth now. Preeta tells that he isn’t dangerous as she heard about him, he is really kiddish to call the police after the sobbing drama. He tells that she has a fire in her, but the same fire burnt her house. She asks him not to decide it so soon, the time will show who is safe and who is not.

Reviewed Rating for Kundali Bhagya 12th January 2022 Written Update Preeta’s arrest: 3/5 This rating is solely based on the opinion of the writer. You may post your own take on the show in the comment section below.