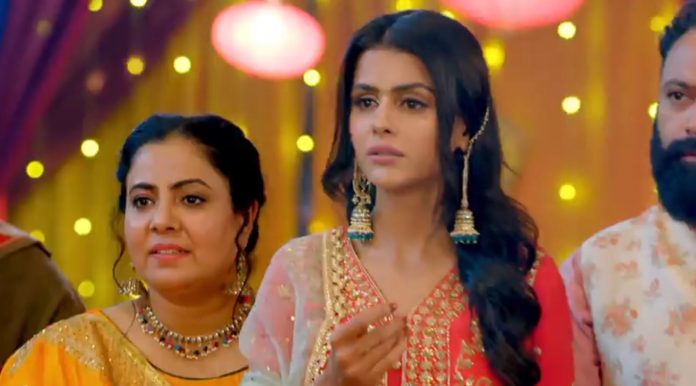 Udaariyaan 11th January 2022 Written Update Jasmin’s surprise Jasmin barges into the Lodhi festive. She tells the families and the village people that Fateh has given her a big surprise by planning the fake marriage, and burning her passport to break her dreams. She adds that now its her turn to give him a return gift. She shouts that Fateh is the son of ex MLA Khushbeer Singh Virk, Fateh had ruined her life by cheating her. Satti tries to stop Jasmin and asks her to forget the past. Jasmin asks Satti to leave her and let her complete her statement. Tejo rebukes Jasmin for hurting Satti. She asks Jasmin to have some shame and leave. Jasmin tells that she won’t go until she unmasks Fateh.

She tells them that she will go once she gives a return gift to Fateh. She further humiliates Fateh, leaving Virks shocked and sunk with disgrace. Fateh and Tejo were getting close with love, but Jasmin ruins their pairing. Jasmin tells them that they can never forget her after her surprise comes out. Jasmin’s hatred will burn everything around. What is Jasmin’s big surprise? She also fools Fateh like he fooled her talking about his big surprise before backstabbing her faith. How will she take her revenge? Keep reading.

Earlier in the show, Angad asks Rupy to not trust Fateh, who cheated both his daughters and played with their emotions. He tells that Fateh will give sorrow to Tejo once again if they trust him. He shows his concern and love for Tejo, and regrets that Tejo still thinks of Fateh, not him. He tells that he stands no chance in Tejo’s life now, but he will always be her friend. Rupy tells him that he understands his real concern and is thankful. He asks Angad to regard them as his family. Jasmin comes next to create a huge drama and insults Fateh and his family publicly to take her revenge.

Jasmin wishes everyone happy Lohri. She starts her taunts on Fateh first and then proceeds to insult Khushbeer. She tells that she is Virk family’s ex Bahu, because Fateh didn’t marry her, he is a fraud who cheated her by faking the marriage. She asks the people to maintain distance from Fateh who can ruin their lives too. She tells them that she was wrong to believe Fateh, who wasn’t trustworthy at all. She tells the people that everyone hates her, but she is a victim in the story. Fateh tries to stop her, but she doesn’t halt the humiliation. She humiliates Virk family, Sandhu family and also Tejo. She doesn’t spare anyone. She asks Buzo’s parents to stop Buzo from meeting Fateh.

Fateh doesn’t want Jasmin to spoil the new relations forming. He fails to stop Jasmin. Tejo interrupts and asks Jasmin to insult her rather than the family. Jasmin tells that Tejo always appears great, so the family chants her name. She criticizes Tejo, which leaves Angad and Fateh angered. Rupy blasts his anger on Jasmin, while Satti melts her heart for her daughter. Satti tells Rupy that Jasmin is their daughter and they shall forgive her. Jasmin reminds Rupy how he disowned her when she came to seek his help. She regrets to have such a family who just loves Tejo. Rupy asks her to stop the nonsense at once and leave, but she doesn’t move. She tells that he has no right to oust her.

Sandhus are ready to forgive Jasmin and accept her back in the family if she drops her hatred for Tejo. Jasmin refuses to budge. She hates Tejo and Fateh as well. She tells that her surprise will leave Fateh shocked. She boasts of her planning that will leave Fateh and his family too upset. Fateh fears thinking her next move. Jasmin continues to pester the families and puts them into an awkward moment. Fateh takes a stand for Tejo. He asks Jasmin to stop insulting Tejo. Jasmin rebukes her for always bringing Tejo between them. She reminds that he loved her a lot before. She breaks her ties with him. She tells everyone about his big deceive. She keeps the surprise a suspense.

She tells that her surprise is for Fateh, Tejo and the families also. She boasts of herself and makes a leave. Fateh thinks of her confident threatening. Tejo takes cares of her family. Fateh tries to normalize the family and cheers them up. He doesn’t want them to get sorrowful. Tejo learns Fateh’s efforts to bring the families together and gets happy. Fateh sees her smiling and feels the day ended well. Rupy doesn’t want Tejo to think of Fateh. He remembers what Angad told her. He tells Tejo that he doesn’t want her to consider Fateh back in her life, because Fateh can’t be trusted. He asks her to stay away from Virk family who would try to unite her with Fateh.

She asks Rupy if he trusts her. He tells that he really trusts her, because she is his pride. She promises to keep his pride and trust. Satti excuses Rupy, who is worried because of Jasmin. She relieves him saying Jasmin’s surprise will be nothing important, Jasmin has an old habit to simply threaten and do nothing. Rupy fears that Jasmin might harm Tejo. Tejo tells Satti about her college trip. She expresses her wish to see Jasmin in the house. Satti tells that she is also afraid of Jasmin’s madness. Tejo asks Satti not to stay scared of Jasmin, who is their family. Even at Virk house, Gurpreet is scared thinking of Jasmin’s threatening to Fateh. She doesn’t want any risk for her son.

Fateh relieves her saying he will handle Jasmin because he knows her limits well. He doesn’t want his family to live in fear. He asks Gurpreet to think of Simran and Buzo’s marriage, and also help him in winning Tejo back. He tells that he is aiming to restore Khushbeer’s prestige back. Gurpreet stays tensed. Later, Tejo and Fateh prepare to leave for the college trip. Fateh replaces the other teacher to accompany Tejo on the trip, just to protect her from Jasmin. He instructs Buzo to convince his family for accepting Simran. He promises to speak to Khushbeer when he returns from the trip. Jasmin plans her revenge on Tejo and Fateh.

Reviewed Rating for Udaariyaan 11th January 2022 Written Update Jasmin’s surprise: 4/5 This rating is solely based on the opinion of the writer. You may post your own take on the show in the comment section below.