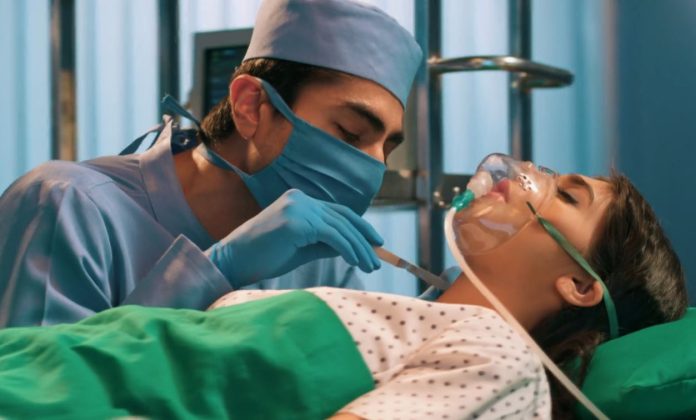 Yeh Rishta 11th January 2022 Written Update Abhi breaks down Medical staff asks Abhimanyu to take over the critical patient as the situation is very bad. They continuously ask numb Abhimanyu to do something as they are losing the critical patient. Abhimanyu keeps staring at wounded Akshara. Akshara’s breaths go deep. Death tune plays as Akshara almost loses her life. Abhimanyu runs to Akshara and asks her to breathe. He continuously requests Akshara to breathe. Akshara comes back to life with a deep breath. Abhimanyu says to Akshara that she heard him finally.

Other staff tell Abhimanyu that they need to start the operation immediately. Abhimanyu fails to hear his staff. The staff goes to call Anand and Mahima. Abhimanyu apologizes to Akshara for hurting her by his ill words in anger. He continuously apologizes to Akshara and requests her to breathe. A staff member tells Mahima that Abhimanyu freezed in the operation room. Mahima says that is not possible and asks the staff what does she mean? Staff member tells Mahima that Aarohi’s sister Akshara met with an accident and is critical now. Aarohi overhears Mahima and staff members’ conversation.

Aarohi cries profusely in front of Anand and Harshvardhan. They ask her to calm down. Aarohi says that she is trying to contact Kairav but his number is turning out busy. She says she is sacred for Akshara. Anand asks Aarohi to relax. Harshvardhan asks Aarohi who is in the operation theater at present? Aarohi replies Mahima and Abhimanyu. Akshara is given an injection through saline. Mahima gives the operation knife to Abhimanyu. Abhimanyu’s hands shiver seeing Akshara breathing deep and fighting for her life. Abhimanyu says, “Om Namah Shivay”. He tells Akshara that he won’t let anything happen to her.

Harshvardhan further thinks Manjiri will do anything for Abhimanyu if she witnesses Abhimanyu’s attachment towards Akshara. He thinks even Aarohi is committing mistakes again and again. Harshvardhan thinks he won’t let love win over his wish and Aarohi-Abhimanyu’s marriage. On the other hand, Abhimanyu continues treating Akshara’s wounds. He cares for Akshara like his own child. Abhimanyu tells Akshara that she can’t sink. Aarohi cries and informs Kairav about Akshara’s accident. Shocked, Kairav asks how it happened. Kairav informs the same to Goenkas. Goenkas gets shocked and worried. Suahsini gets very worried. Swarna calms her.

Akhilesh asks Kairav how this happened? Kairav says Aarohi told that some taxi driver dropped injured Akshara in the hospital. Goenkas gets worried about Akshara. On the other hand, Harshvardhan informs Manjiri that Akshara met with an accident. He tells worried Manjiri that they are taking care of Akshara in the Birla hospital. To not let Manjiri know Abhimanyu’s true feelings, Harshvardhan intentionally asks Manjiri to go to Kuldevi temple to pray for Abhimanyu and Aarohi’s marriage. He urges Manjiri to go to Kuldevi temple now as it’s important for Abhimanyu’s happy life.

On the other hand, Abhimanyu keeps talking to Akshara like she is a kid. He also continues Akshara’s treatment. A staff member reads Akshara’s report in front of Abhimanyu and Mahima. He tells Akshara has a lot of blood loss, side injury and her vocal cords got injured too. Mahima gets shocked hearing about Akshara’s vocal cords injury. She asks Abhimanyu to be extra careful as Akshara’s vocal cords got injured too. Abhimanyu gets more worried about Akshara hearing this. He recalls Akshara’s passion for singing and treating people through her music therapy. Mahima tries to encourage Abhimanyu by telling him that he is the best. She also tells Abhimanyu that he can’t make a mistake today.

Abhimanyu asks Akshara if she is listening to him? At Goenka Mansion, Suhasini screams at the God’s idols and asks them how much they will test them as they already snatched Naira, Sirat and Kartik from them. Swarna and Akhilesh go to Suhasini. Suhasini requests God to take her life and let her leftover family live peacefully. She breaks down and Swarna tells her that nothing will happen to Akshara. Swarna tells Suhasini that Abhimanyu is himself performing Akshara’s operation and Mahima is there too. Suhasini asks God what he/she wants to happen?

On the other hand, in the operation theater, Abhimanyu continues operating Akshara. Birlas and Goenkas reach the hospital. Crying Aarohi runs and hugs Manish. Kairav runs to see Akshara. Anand asks everyone to not take tension as Abhimanyu is handling everything. Manish asks Harshvardhan if he is seeing Akshara’s operation. He requests Harshvardhan to let him see too. Harshvardhan tells Manish that being non medical people they won’t be able to see the operation. Kairav and Manish request Birlas to let them see how is Akshara’s condition. Anand explains to Gonekas that Akshara has lost a lot of blood and has scratches all over her body. He asks them to see Akshara after the bandages.

Manish again requests Birlas to let him see. Aarohi sees Akshara’s operation and explains to her family that Akshara’s vocal cords are at risk. Everyone gets tense hearing this. Aarohi further explains that Akshara won’t be able to sing if something happens. Goenkas gets shocked hearing this. Akhilesh, Suhasini and Swarna get shocked on knowing about Akshara’s injured vocal cords. Suhasini asks God if he/she wants to snatch Akshara’s voice too after her parents. She cries profusely in Akhilesh’s arms. At the hospital, Aarohi explains further to Goenkas and stops. Inside the operation theater, Abhimanyu and Mahima get shocked seeing Akshara numb. In the next episode, Gonekas will ask Aarohi to tell them what happened to Akshara. Aarohi will go silent seeing the operation footage. Abhimanyu will break down seeing Akshara.

Reviewed Rating for Yeh Rishta 11th January 2022 Written Update Abhi breaks down: 5/5 This rating is solely based on the opinion of the writer. You may post your own take on the show in the comment section below.