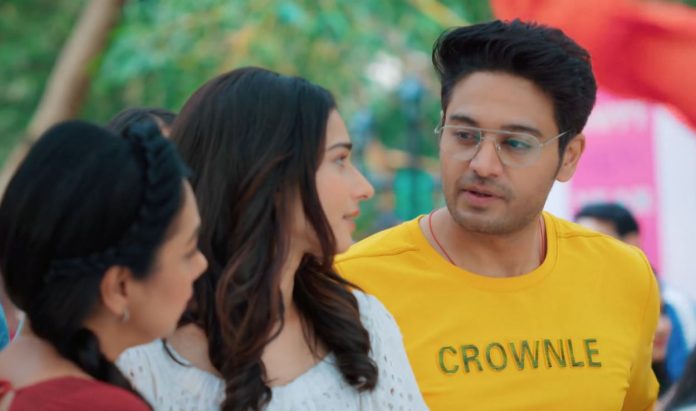 Vanraj too dances with Malvika to cheer her up. This surprises Malvika. Anupama takes Baa, Bapuji, GK and Mamaji’s blessings. Everyone blesses her. Anupama gives Baa a back hug, like a daughter. Nandini, Samar, Pakhi and Paritosh too try to cheer up Malvika. Malvika gets engulfed in emotions, seeing Shahs, Kapadias and society people’s efforts to make her happy. Anupama and Malvika tightly hug each other. Anupama too dances with Malvika. Within the dance, she advises Malvika to always be happy. Anupama enjoys spending time with her kids and hugs them.

Vanrah, dancing with Malvika, notices Anuj and Anupama happy together. Anupama with sign language thanks Vanraj and the latter says it’s fine with a smile. Malvika apologizes to Shahs for ruining their New Year party unintentionally. Shahs tell Malvika they enjoyed their “Morning New Year Party and Dance” with her. Vanraj says the true New Year’s resolution is that people should leave the past behind in the New Year. Anupama agrees to Vanraj’s words and says Anuj should also do this. Anuj agrees to do it. Anupama says we can’t change what happened, but instead we can surely change our point of view.

Anupama explains that people should learn from their mistakes and move on in life. Malvika agrees to Anupama’s words. Anupama asks Malvika to forget pain and do something that makes her very happy. Shahs tell Malvika where and in which thing they find happiness. Everyone laughs with each other. Bapuji explains to Malvika to learn by taking the first step as the rest of the way would seem easy that way. Shahs, Kapadias and kids wish Happy New Year with letter stencils. Pakhi is seen talking to someone and telling the person on the other side of the call that she hasn’t changed her mind. Samar questions Pakhi who she was talking to.

Pakhi asks Samar to not try to be her parent. Samar tells Pakhi that she has done many wrong things in the past that he fears that she could bring another trouble for the family. Pakhi tells Samar that she isn’t a child now. Samar and Pakhi argue with each other. Baa scolds them and stops their argument. She fears how the whole day will go, as it started with an argument. Next Shahs are seen enjoying a picnic with each other and Kapadias. Everyone discusses the importance of the New Year with each other. Malvika hugs Anuj as Anupama’s kids hug her. Anupama and Paritosh discuss that Kinjal went to see her ill parents. Anupama asks Paritosh to later ask Kinjal about her parents’ well-being.

Anupama feeds food to Bapuji and GK saying that they are the youngest kids of their family. Anuj says the morning New Year celebration was Anupama’s idea as she failed to enjoy New Year with Shahs last night. Malvika raises a toast to Anupama. She thanks Anupama for handling her last night and for cheering her up in the morning. Malvika says she feels light like the whole burden went off from her head. She calls Anupama best. Anuj whistles and feels happy with Malvika and Anupama’s growing bond. Anupama explains that every year is a blank copy of 365 pages. She says if a person writes a good thing, truth, poetry or God’s name on just one page, it makes the other 364 pages smell good.

Anupama wishes good things to happen to everyone this new year. Later, Anupama gives fruits to Anuj. Anuj tells Anupama that since she came into his life, he gained weight and she lost some. Anupama tells Anuj that when men live happily he gains weight and women lose weight in happiness. Anuj says to Anupama that her words mean that she is happy since he came into her life. Anupama feels shy. She sees Vanraj and Malvika happy together. Anupama tells Anuj that last night’s incident could occur again. Anuj sees Malvika enjoying with everyone. He tells Anupama that she is right. Anupama says to Anuj that Malvika needs a good doctor and good treatment.

Anuj agrees with Anupama. Anuj asks Anupama what to do as people think visiting a psychologist is embarrassing. Anupama tells Anuj that she and Vanraj struggled a lot to explain to their family about the importance of visiting a psychologist, when they took Pakhi for treatment/counseling. Anupama says she doesn’t know why people feel it is embarrassing to visit a psychologist when they don’t feel the same while visiting other doctors for other illnesses. Anuj says Mental stress and depression has increased a lot but people find it difficult to discuss it with their family openly. He tells Anupama that they need to get Malvika treated without making her feel awkward.

Vanraj asks for the office door’s code from Anuj. Anuj says he will message him. He asks Vanraj why he suddenly needs to go to the office on holiday. Vanraj says according to him New Year should start from work. He says that he has a meeting with Deeraj patel. Anuj recalls that it’s a meeting for restaurant interiors. He insists on joining Vanraj. Vanraj questions Anuj why? Anuj says Deeraj Patel is a tough nut to crack. Vanraj sarcastically tells Anuj that he is strong enough to handle Dheeraj Patel. Anuj still insists on going with Vanraj. Anupama feels tension between Anuj and Vanraj.

Vanraj refuses Anuj’s help. Anuj says he wants to help Malvika not him. Anupama insists on joining Vanraj and Anuj. Anuj asks Anupama to have fun with family which she missed last night. Anuj and Vanraj leave together. Anupama thinks why she feels scared that something bad will happen seeing Anuj and Vanraj together. Vanraj feels angry with Anuj’s company. Baa tells Bapuji that Kavya went to her friend’s place in Mumbai. She says Kavya also told that she would find a job in Mumbai. Bapuji says he can’t find out what happened to Vanraj. He says first Vanraj broke a long time marriage with Anupama and then broke marriage with Kavya in just one year. Bapuji says Vanraj didn’t even think of Kavya once.

Baa gets angry at Bapuji for going against Vanraj everytime. She reminds Bapuji that Kavya named their house on hers once by deception. Bapuji tells Baa that she and Vanraj didn’t notice that Kavya renamed their house to them again. He further tells Baa that Kavya is goofy but not bad. Bapuji says Kavya did everything because of fear, not with any evil intentions. Bapuji says Vanraj made Kavya insecure and she went the wrong way. Baa asks Bapuji if Kavya is wrong according to him? Bapuji says both Vanraj and Kavya made mistakes. He asks Baa why can’t they give chance to Kavya when they gave many chances to Vanraj too.

Pakhi tells Anupama that the exposure, college and future that she would get in New York, she won’t get in India. Pakhi looks at Anupama hopefully. In the next episode, Anupama and Anuj will get shocked seeing Vanraj and Malvika’s growing bond. Anuj will get angry seeing their closeness. Next Vanraj and Anuj will be seen arguing badly about their knowledge of work. Malvika and Anupama will get tensed seeing their arguments. Anuj will ask Vanraj to shut up and get lost.

Reviewed Rating for Anupama 12th January 2022 Written Update Anuj blasts: 5/5 This rating is solely based on the opinion of the writer. You may post your own take on the show in the comment section below.