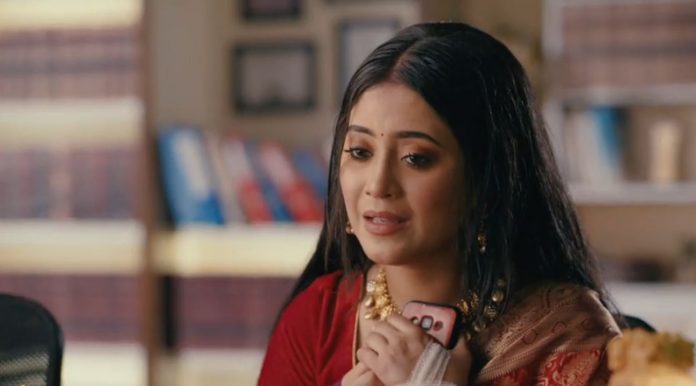 Balika Vadhu 12th January 2022 Written Update Big twist Anand is seen lost and sitting in lawyer Sonia’s office. Sonia asks her if she is feeling scared? Anandi tells Sonia that she wants to win over her fear and get freedom from it. She says she won’t get scared now. Sonia asks Anandi to sign some papers. Anandi asks Sonia if her family would get arrested after signing annulment papers? Sonia asks Anandi how can she call Anjariya’s after whatever happened? Anandi tells Sonia that Anjariya’s helped her and her brother grow after her parents died. Sonia asks Anandi to not worry and sign the annulment papers. She tells Anandi that she will take care that Anjariya won’t get arrested.

At Anand’s home, Premji tells Sejal that Anandi went to annul her and Jigar’s child marriage. Sejal asks why Anandi didn’t talk to them before? Media persons interrupt their conversation. They ask Premji how he is feeling after knowing that his business has spread globally. Premiji tells media persons that he is happy that his and Mehul’s smallest business grew so much. Media persons ask about Mehul’s whereabouts. Bhairavi comes and tells them that Mehul had gone to attend a last minute urgent meeting. On the other hand, Sonia congratulates Anandi and tells her that she finally completed first step of annulling her child marriage.

Anand happily tells Diya that Anandi finally signed her annulment papers. Bhairavi comes and asks Anandi why is he so much happy with Jigar and Anandi’s child marriage annulment? She tells Anand that she can’t stake her son and her reputation for helping Anandi. Anand tells Bhairavi that their relationship has been sour for years because she prioritizes her reputation over his happiness. He tells Bhairavi that he will get ready for Uttaryan and pretend to be happy with her. Diya worries seeing tension between Bhairavi and Anand. Anand meets Anandi and asks her if she signed the annulment papers? Anandi says yes.

Anand explains Anandi to be strong and stand for herself first. Anandi says a person should think about everyone as he/she gets alone if he/she thinks about himself or herself only. Premji asks Mehul if their business/professional relationship would get affected with whatever happened? Mehul tells Premji that his thinking isn’t small like his thinking. He says that he keeps personal and professional matters separate. Mehul also tells Premji that their family’s personal relationship won’t be the same after whatever happened. Jigar is seen flying the kite shamelessly. His friend asks him how can he peacefully fly kites after whatever happened.

He asks Jigar to think what his family would think seeing him without worry. Jigar tells his friend that nobody can snatch whatever is of him. He says nobody can snatch his things or Anandi from him. Jigar’s friend tells him that Anandi is coming. Anandi seeks blessings from Sejal and Premji. Mehul leaves from there. Premji and Sejal refuse to bless Anandi. They scold her for her marriage annulment decision. Bhairavi asks Sejal and Premji to not create a scene in front of the media. Anand asks Anandi to not feel uncomfortable saying that everything will go fine. Kiara asks Anandi to not look sad in this party too. She gives the idea to fly kites.

Jigar intentionally and indirectly pushes. Anand tells Jigar that he pushed him because he accepted defeat even before the competition. With attitude, Jigar tells everyone that he does get defeated by anyone. Anand says kite competition will decide the winner. Anandi reminds Jigar that he lost in “Gilli Danda” from Anand 10 years ago. She asks him to not be so over confident. During the argument, Anandi will tell Jigar that now no one will be able to stop her success. Diya announces the kite competition in the Uttarryan celebration. Anandi also participates in it. Elders too participate in the competition. Everyone enjoyed the competition. Bhairavi and Mehul cut Sejal and Premji’s kite. Jigar too cuts someone’s kite. Anandi too cuts someone’s kite.

Anand gets happy seeing Anandi happy. Kiara praises Anand when he cuts someone’s kite. Jigar’s friend tells Kiara that she will soon praise Jigar too when he will cut someone’s kite. Anandi tells Jigar’s friend that he will praise her when she will cut Jigar’s kite. Jigar will get angry hearing this. In the next episode, Anjariyas will blame Anandi for everything. They will taunt her at each step. Maadi Baa will break all relations with Anandi. Anandi will feel bad by Anjariyas behavior towards her after her big decision. Bhairavi will rudely tell Anandi that she can’t live in their house. She will ask Anandi to survive on her own. Anandi will ask herself to not feel defeated and work hard to survive on her own.

Reviewed Rating for Balika Vadhu 12th January 2022 Written Update Big twist: 3/5 This rating is solely based on the opinion of the writer. You may post your own take on the show in the comment section below.